St. Paul Gets Closer to New Stadium – Next City

St. Paul has big plans for its Midway neighborhood: new housing, green space, a movie theater and, at the center of it all, a 21,500-seat, $150 million Major League Soccer stadium. Owners of Minnesota United announced ​last October that St. Paul would be home to the sports team, after considering and rejecting Minneapolis.

This week, Minnesota lawmakers introduced a bill that’s key to paving the way for a St. Paul groundbreaking in June: tax breaks for the privately financed stadium, including an exemption from state property taxes and a tax break on construction materials. The city has already approved nearly $20 million in infrastructure improvements around the Midway site.

City officials have touted a number of reasons why the stadium will be good for St. Paul, including the usual promises about job creation and economic development. Its agreement with the team mandates minority hiring goals for the general contractor, and allowance for public use of the facility after it opens. One-fourth of vendors, subcontractors and related partners are expected to be women- and minority-owned businesses. (For a deeper dive into the best municipal practices when it comes to stadium deals, see Next City’s “With NFL Teams Shopping New Stadiums, How Can Cities Get the Right Deal?”)

The team’s lead owner, William McGuire, also says games will be affordable to attract a young and racially diverse fan base. The stadium will be within walking distance of a large affordable housing complex heavily populated by East African immigrants, and within a few train stops of working-class Southeast Asian and African-American neighborhoods.

The city-team agreement also calls for 4 of the 12 acres slated for the site to be open green space to start. 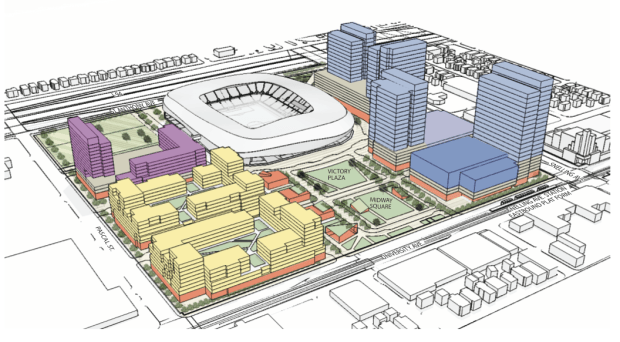 A rendering of St. Paul’s plans for the Midway area (Credit: St. Paul)

Promises of plazas aren’t enough to sway some who say subsidies for yet another sports stadium aren’t worth it. (In 2011, the Minnesota legislature pledged $450 million in public money for the new Minnesota Vikings stadium. That facility is currently being built in Minneapolis.)

St. Paul City Council Member Jane Prince says the plan was rushed and lacks sufficient public benefits. “I would have liked [for us] to have been able to do an independent analysis of the deal,” she says. “I am also troubled by the fact we will not have a parking and transportation study done until April. Whatever comes back in that study, we’re going to have to figure out how to deal with.”

Twin Cities Pioneer Press has a thorough breakdown of the community benefits outlined in the agreement — including supporting youth sports and developing bike- and pedestrian-friendly upgrades to the area around the stadium — here.