The Fight to Slow Traffic and Save Lives Builds in Pa. – Next City

The Fight to Slow Traffic and Save Lives Builds in Pa. 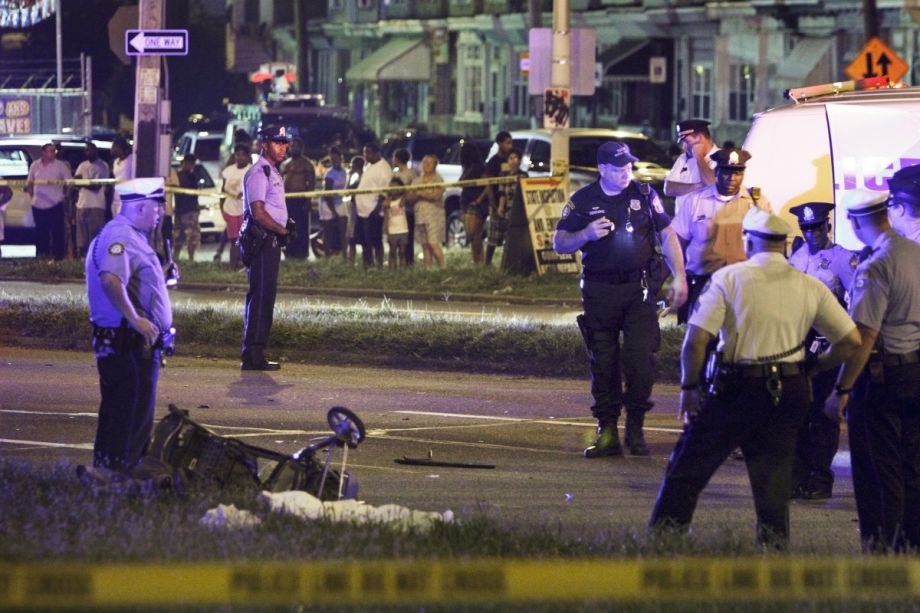 Police gather at the scene of an accident that killed Samara Banks and three of her children as they crossed Roosevelt Boulevard in Philadelphia. (AP Photo/ Joseph Kaczmarek)

One year ago this month, 28-year-old Samara Banks and three of her children — all under the age of seven — were fatally struck by a speeding Audi while crossing Roosevelt Boulevard, a highly trafficked roadway running through North Philadelphia that’s part freeway, part divided highway. The senseless loss of so many innocent lives prompted renewed calls for safety improvements along the 12-mile stretch and finally, the calls may be finding an audience in Harrisburg.

In April, Ramsey made a trek to the state capitol to speak in favor of a bill that would authorize cities to install automated cameras — which are currently illegal in Pennsylvania — along roadways to capture the license plates of motorists who exceed the speed limit.

“This culture, where [people are] driving 60 and up to 80 miles per hour on [Roosevelt Boulevard] is unacceptable and must change if we are going to save lives and reduce accidents,” Ramsey said. “Current traffic enforcement tactics alone simply cannot bring that change.”

Even the lower-tech radar gun faces a fight in Pennsylvania. The state is the only one in the nation that enforces a blanket prohibition on municipal police use of speed radar. Under current law, which dates to 1961, radar is only permitted for use by state troopers, and local cops have long complained that they are forced to rely on less-sophisticated timing methods — like stopwatches and painted lines — to nab speeders. However, Harrisburg lawmakers currently have five bills moving through the House and Senate that would end the long-standing prohibition.

Backing for the bills has been vocal and widespread. It’s not hard to see why. According to Pennsylvania’s Department of Transportation, there were 455 speeding-related deaths statewide from 2012-2013. And data shows that the numbers of speeding fatalities on roadways where police are prohibited from using radar were three to six times higher than those on roadways where police do use the technology.

In separate hearings in May and June, the state’s Senate and House Transportation Committees heard testimony from a host of witnesses in support of expanded radar use. Dozens of municipalities have passed resolutions in support of the measure; and the Pennsylvania State Mayors’ Association has joined forces with local chiefs of police across the state and other municipal groups to form an organization called the Radar Coalition to push for its passage.

But while dissent has been muted, not everyone is in favor of expanding radar use in Pennsylvania.

The legislation’s most outspoken critic is Democratic State Senator Jim Ferlo whose district includes Allegheny County, where Pittsburgh is. Ferlo, who also opposes red-light cameras, thinks there are better ways than radar to enforce traffic laws and prevent fatalities, such as making roadways safer for pedestrians.

“I’m not opposed to enhanced public safety but the question to me is what is the most effective way to achieve that,” he said. “In our cities we have ineffective crosswalks that don’t necessarily meet code. A legal crosswalk to me is one that is clearly defined with an overhead light that turns red or green. In cities like Pittsburgh we are seeing these replaced by signs that tell drivers to yield for pedestrians, which are less safe.”

Indeed, the intersection where Banks and her children were struck on Roosevelt Boulevard did not have a crosswalk or a traffic light. In response to the tragedy, in May Philadelphia began construction on a pedestrian crosswalk at the site, which City Council recently voted to name in honor of the deceased woman.

Ferlo also echoes other critics of expanded radar — including Jim Lardear, director of government affairs at AAA — who worry that instead of being used to enhance public safety, cash-strapped communities could begin to view the devices as an easy source of revenue.

“We really want these programs to be done for the right reason,” he said. “Everybody’s fear is what’s going to happen, will they target out-of-state motorists, out-of-town motorists just for revenue? We’ve seen that happen.”

Lardear points to a two-mile stretch of Interstate 295 in Prince George County, Virginia, dubbed the “Million Dollar Mile,” where police from the nearby town of Hopewell write an average of 1,000 speeding tickets a month despite having a population of just 22,655. In 2010 the town netted $1.1 million in fines, nearly three-quarters of them from out-of-state drivers.

Pennsylvania State Police Commissioner Frank Noonan addressed the issue of revenue generation head-on during a State Senate hearing last month, where he testified in support of expanding radar use.

“I think there are ways we can craft this so that would not be an issue,” he said. “If we found that there was some municipality that was abusing this privilege I don’t think it would be very difficult for us to go back and remedy that very quickly.”

Lardear made his case for Pennsylvania drivers before a House panel in May. He says AAA can get behind expanded radar if communities are given the option of voting on whether they want it or not, and if a significant portion of revenues are funneled to the state instead of being diverted into municipal coffers. (With the speed camera bill Commissioner Ramsey backs, proceeds from $100 tickets would be shared statewide for highway improvements.) Lardear would also like to see PennDOT conduct an assessment of all posted speed limits on roads where radar will be used to ensure they are properly aligned with actual traffic flows.

Most of the bills under consideration have yet to address the issue of revenue distribution. But under an amendment to House Bill 38, introduced by Republican State Rep. Mario M. Scavello, localities would only keep 50 percent of all proceeds from speeding tickets, with the remainder going to the county or state.