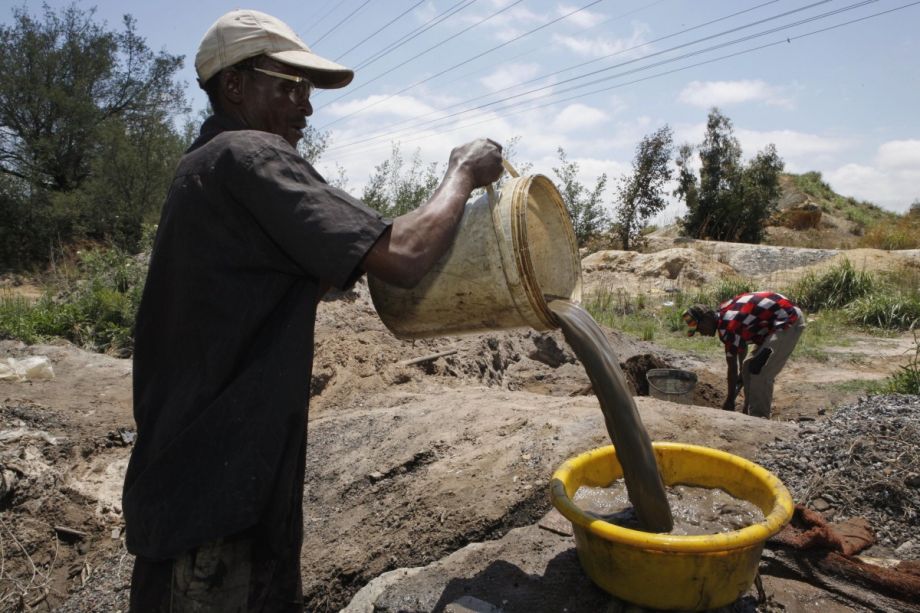 Amid an unemployment crisis in South Africa, many people have turned to working informally in abandoned gold mines. (AP Photo/Themba Hadebe)

In South Africa, tuberculosis is a public health emergency, afflicting a whopping 450,000 people each year. Amid one of the highest rates of TB in the world, two groups are working toward treatment in two very different ways: direct care and a demand for justice. Each approach could have special impact on informal workers.

Johannesburg, South Africa, sits atop the largest gold deposit in the world. The work of mining it (and the other gold reserves in the country) may rank among the world’s toughest jobs — not least of all because of the likely odds of contracting deadly respiratory illnesses while working. In response to what they say is corporate neglect of the risk, a coalition of 56 organizations and individuals has mounted class-action litigation against 32 mining companies, asking for companies to compensate ill miners and their caregivers.

Meanwhile, a group in Cape Town is trying another approach — with a booklet of clinical protocols. The Practical Approach to Care Kit (PACK) is a straightforward global health innovation, intended to augment clinicians’ ability to serve patients with high-quality care. In a press release, Professor Lara Fairall said the project was meant to “leverage their resources to address the gap in clinical decision support and implementation in low- and middle-income countries.” Fairall is head of the University of Cape Town Lung Institute’s Knowledge Translation Unit (UCT KTU), which has originated the project and is now expanding it in multiple countries with help from the British Medical Journal to help advance universal healthcare.”

Neither the booklet nor the lawsuit is aimed solely at tuberculosis. Although respiratory specialists designed the original PACK, the 100-page booklet now includes a range of 40 common symptoms and 20 chronic conditions, such as diabetes. Tracy Eastman, UCT KTU international director of development, says covering a wide variety of interventions means increasing care access, ranging from help with quality monitoring to “issues like prescribing regulations … are there medications that doctors are prescribing that nurses could be prescribing?”

Likewise, the lawsuit against the mines raises tuberculosis via another disease that mining causes: silicosis, an incurable lung disease caused by inhaling silica dust, a byproduct of mining. A testifying expert noted the uncontroversial fact that silicosis raises the risk of a person experiencing active TB. (The lawsuit also discusses related diseases, like HIV/AIDS, which infects 18.9 percent of South African adults.)

That said, some 80 percent of South Africans have latent tuberculosis — in other words, infections that might turn into active disease. So both projects stand to impact a great many affected people in the country. Indeed, they might especially affect informal workers (those whose work is outside government-regulated employment) — although each project responds to a slightly different group of informal workers.

Most gold miners themselves are not informal workers. The industry is an important supplier of formal jobs in South Africa, and the companies included in the lawsuit are formally recognized by the South African government. That said, the lawsuit begins with the premise that a large amount of informal, often unpaid labor is necessary to cope with the outcomes of mining. “In the labour-providing areas from where most mineworkers come, those who are seriously ill are likely to be largely dependent on home- and community-based care,” reads a brief Dean Peacock, a co-founder of a group called Sonke Gender Justice, submitted to the court.

Sonke Gender Justice Representative Tanya Charles further explained that this is why the feminist organization is involved in the suit: “Women are forced to be carers, to engage in unpaid care work, looking after these men who are suffering very slow deaths from silicosis, silica-TB,” typically in sections of the country where professional healthcare is “not easily available.” Faced with the demands of nursing a sick loved one, many women drop out of school or leave paying jobs — thereby compounding the financial burden of the miner’s illness.

Peacock’s brief also noted out why a lawsuit is necessary to help these caregivers receive compensation: “The law… does not vest them with any claims in their own right for the unpaid work that they perform in undertaking this burden of caring.” Charles explains that a successful settlement will result in a change to the current compensation act, which has served very few of the eligible people: “Rather than providing justice for a few [as current policy does], this would provide justice for the many.”

The suit is politically charged — Treatment Action Campaign calls the mining companies’ neglect “a national disgrace” and says it “mirrors the apartheid and colonialist exploitation of workers” — but in some ways the outcome is uncontroversial. “It is looking very much in our favor… the nature of the neglect and the extent of it is so obvious,” Charles said. “We are certainly hopeful and really positive.”

The desired impacts are not much more than modest replacements of violated human rights. I asked Charles whether sufficient access to clinics would be enough. “I think so,” she said.

There, the unrelated PACK project might be a boon. The program already reaches 20,000 health workers across 2,000 government healthcare facilities in South Africa, including many in areas that have gold mines or send workers to gold mines. (The project is also operating in Malawi and Botswana, and will soon expand to other African and Asian countries as well.)

In the end, that might be the surest way to serve gold miners in need of the help. South Africa exports generate several billion dollars’ worth of gold each year, but the country has the oldest and deepest mines in the world. So it is unsurprising that overall productivity is gradually declining, as some veins are tapped past the point of corporate profitability. Amid a decades-long unemployment crisis, men from low-income areas often turn to working informally in abandoned mine shafts, risking inhaling toxins, enduring injury and even sometimes dying to harvest the last scraps of gold.

And here — in a sense inadvertently — PACK might offer its own benefit to informal workers. Although at just as much risk as any other miner (and likely even more), these informal workers aren’t beneficiaries to payouts from the formal companies who have already abandoned the mines they now work. Where can they go for help, in the event that the same respiratory diseases befall them as any other miner? Perhaps PACK. The program helps people irrespective of work status.