Some Vancouverites Want Their Olympic Streetcar Back – Next City

Some Vancouverites Want Their Olympic Streetcar Back 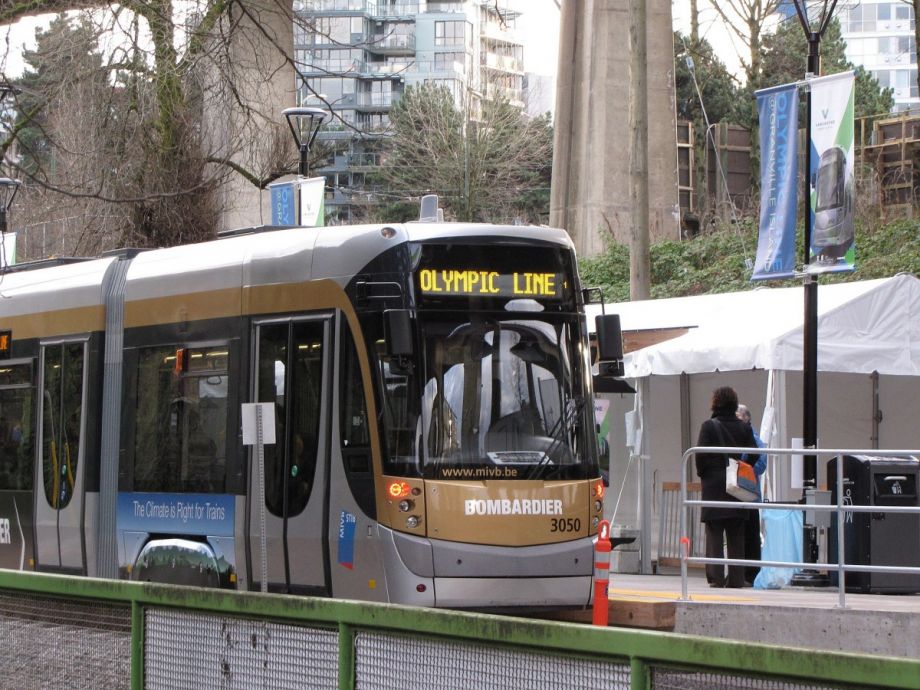 Some Vancouverites Want Their Olympic Streetcar Back
One of the chief criticisms leveled against the Olympic Games is that the International Olympic Committee makes cities spend tons of money on facilities that may never see any use after the games are over.

One such facility is currently gathering weeds in Vancouver, CBC News reports, and some locals wonder why this is so.

The line only ran for 60 days. All of its stations and most of its track remain in place, unused. Peter Finch, who operated the two streetcars Bombardier built for the line and founded the Friends of the Olympic Line, says that with a little imagination, the line could become a valuable addition to Vancouver’s urban environment — “not merely transportation but a social venue. Something that is very different from anything that Vancouver has seen before.” Replicas of historic Vancouver streetcars outfitted to modern standards of comfort, he says, would draw locals and visitors alike to use the line.

The city of Vancouver disagrees, calling the line a novelty that only marginally contributed to the Granville Island and Vancouver visitor experience in a written statement. But Granville Island management disagrees with the city: “The streetcar, when it was running during the 2010 Olympics, was a great service for not only our visitors but for the 3,000 people that work on Granville Island,” Lisa Ono, the island’s manager of public affairs and programming, told the CBC.

A bus route and a ferry currently provide service between the two destinations. The city says that the regional transit authority, TransLink, holds the streetcar’s fate in its hands. The CBC heard no word from it by the time it ran its story.

Traffic between Wasilla and Anchorage has gotten to the point where Alaska Gov. Bill Walker quietly inserted $4.5 million into the state’s fiscal 2018 budget to launch commuter rail service between it and Alaska’s largest city.

The Mat-Su Valley Frontiersman reports that “this rekindled a dream of more forward-thinking transportation options beyond piling tens of thousands of cars onto the overburdened Glenn Highway.” The Glenn Highway, one of Alaska’s four unsigned Interstates, is the freeway heading north from Anchorage towards Wasilla. The paper interviewed Wasilla’s current mayor, Bert Cottle, who is enthusiastic about the prospect. Noting that the community had something that could have been called “commuter rail” in the 1950s, before the Glenn and Parks highways were built, he said that the main reason Wasilla doesn’t have such service now is because some powerful local interests don’t want to see competition with the existing bus routes.

While Cottle is realistic about what might happen in terms of patronage, he argues that every passenger pulled out of their car helps. “Even if you’re never riding the train, it might make it safer driving,” he told the Frontiersman. “I can’t find anyone telling me there’s a 6-lane highway coming, so if it gets another couple hundred cars off the road each day, that makes it safer.”

His rebuttal to possible critics who would object to a subsidy for rail service is similarly straightforward: “It is a niche, and maybe we won’t ride it, but somebody will ride it and that will ease up traffic elsewhere. It has to be subsidized, but the buses out there now are subsidized to the tune of $2 million a year; our roads are subsidized — we don’t pay for roads in Alaska — ferries are subsidized, so if it’s economically feasible for you to ride a train, why not?” Besides, he went on, there are things you can do on a train ride that you can’t do behind the wheel.

Trains Meet Planes at New Sydney Airport
The Australian federal government and the state government of New South Wales are going in together on a new regional rail link to connect central Sydney with a new second airport planned for Badgery’s Creek.

The International Railway Journal reports that each government will pick up half of the new North-South Rail Link’s estimated price tag of A$7 billion ($5.5 billion U.S.) Canberra and Sydney have already put up A$50 million ($38.8 million U.S.) to conduct a business case study for the line that will help determine the final route, station locations and final cost for the line.

The line will begin at St. Mary’s on the existing Sydney-Penrith route and run south for 22 km (13.7 miles) to the new Western Sydney Airport and an associated edge city to be developed called Aerotropolis. The latter is slated to house manufacturing, education, research, medical and commercial facilities.

Plans call for the line to be in service by the time Western Sydney Airport opens in 2026. A proposed southern extension from the airport to the regional rail network south of Sydney via Leppington is also under consideration.