Job-Seekers Withering on Waiting Lists? Not on This Philly Woman’s Watch – Next City

Job-Seekers Withering on Waiting Lists? Not on This Philly Woman’s Watch 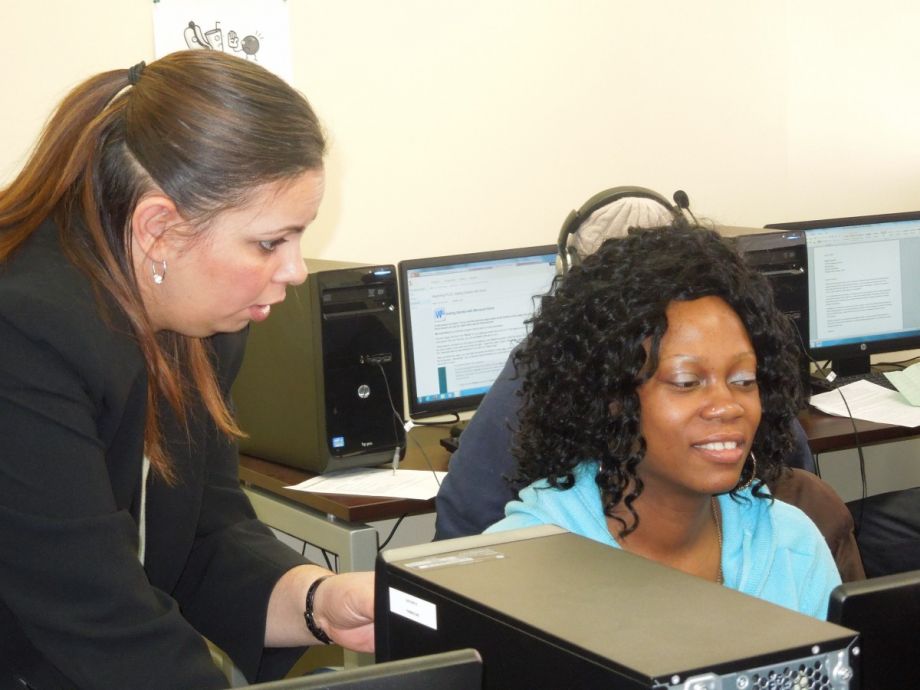 A myPLACE learning coach helps a student with an online course at the Philadelphia literacy program. (Credit: The Mayor’s Commission on Literacy)

Getting people out of poverty and providing families with financial stability isn’t as simple as job creation or even workforce training.

“I can draw a straight line between poverty and low literacy,” says Judith Rényi, the executive director of the Mayor’s Commission on Literacy in Philadelphia. In that Pennsylvania city — where there’s a 26 percent poverty rate — over 550,000 adults are functioning below the education standards that would qualify them for the most basic-skills jobs.

When Rényi joined the Commission in 2011, she observed how, across the state, adult literacy programs aimed at getting tens of thousands of people ready for stable careers were mostly decentralized and scattershot.

“I saw several issues that I thought technologies could, if not solve, at least make less horrendous,” she says. With that in mind, she oversaw the creation of the myPLACE (Philadelphia Literacy and Adult Career Education) program.

Prior to myPLACE, she says, the Commission was “doing referrals into a black hole.” Every couple of months, they’d do a phone survey to ask education service providers about class schedules and open seats for people who wanted help. There was no way to follow up on referrals or track progress.

With the registration and enrollment management system created through myPLACE, the Commission now acts as a central “registrar” to what Rényi likens to a multi-campus, citywide open university. There are three myPLACE campuses across Philadelphia that handle intake, assessment and case management once an adult learner makes the initial phone call or walks in to ask for assistance.

Jacqueline Vazquez, a myPLACE learner, began the program while unemployed and aspires to earn her GED. (Credit: The Mayor’s Commission on Literacy)

“Getting up the courage to call for help is a huge deal,” says Rényi. “We want to help you immediately. We don’t want you to wither away on waiting lists or send you off to make another phone call, because maybe your courage will have failed you before you make a second call.”

Denise Brunker is a learning coach at the myPLACE outpost of North Philadelphia’s Congreso de Latinos Unidos. Brunker says that since July of last year, around 700 people have sought out literacy services there, mostly thanks to word-of-mouth recommendations.

“A lot of them need to learn English to help their children in school,” says Brunker. “A lot of them simply want to get on track in order to get their GED. Some of them want skills to continue at the job they’re currently in or they are looking for employment.”

Each incoming student completes an assessment that measures where they are in their education and their job skills. They’re then assigned a learning coach and enrolled in an intro course that covers computer skills, career exploration, resume building and the creation of a learning plan. Students can take the course online from home. After passing that, a student is placed in appropriate classes, either at a myPLACE campus or one of the 23 myPLACE literacy partner institutions around the city.

Rényi says that the ultimate goal is to “try to get them back into the mode where they see themselves as learners,” even if it takes a significant amount of time and effort for someone who might be reading at a fourth-grade level to get on the pathway to completing their GED.

Over a 10-month period in 2014, 3,115 people were tested through myPLACE. The goal is to scale that number up to 8,000 in 2015 and 15,000 in 2016. According to Rényi, the program’s technology makes it highly scalable. Only a couple of thousand dollars is needed per intro class to pay for licenses and facilitators, though the Commission and its partners still have to work quickly to meet the demand of students rapidly finding myPLACE through personal referrals.

“I think the Mayor’s Commission realizes that one of the patterns that happens in education of adults is that they get bounced to different services, or they don’t know what’s available to them,” says Congreso de Latinos Unidos’ Michael Thompson. “Being able to connect them to these services and for them to have a record of their accomplishments was something that was sorely needed.”