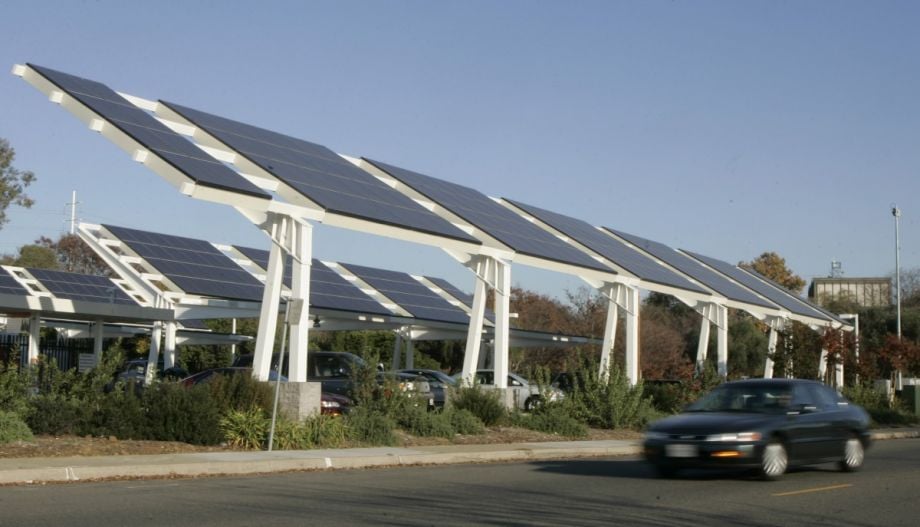 Community solar gardens — does anything sound more Utopian? Join one of these so-called “collectives” and you can enjoy locally sourced sun power with your CSA veggies and anti-capitalist zines (no privately owned rooftop necessary).

That, at least, is the impression left by a new report from the National Renewable Energy Laboratory, “Shared Solar: Current Landscape, Market Potential, and the Impact of Federal Securities Regulation.”

“We estimate that 49% of households are currently unable to host a PV system,” it reads, listing renters and residents of high-rise or multi-unit housing. “If federal, state, and local policies can institute a supportive regulatory environment, shared solar presents an area of tremendous potential growth for solar photovoltaics (PV), expanding the potential customer base to 100% of homes and businesses.”

Typically, “shared solar” functions like rooftop solar minus the roof. A group of participants buy, lease or make monthly payments toward a system, located in an area with plenty of sun. Then, even though energy flows out into the grid (instead of directly into the homes of “investors”), they receive savings for however much they own (or lease, or make payments toward).

In other words, it’s a co-op version of the individual rooftop model, currently dominated by private players. And in some ways, it’s a promising structure for utilities losing ratepayers to the likes of Elon Musk.

Jim Burke is a program manager for SolarShares, from Sacramento Municipal Utility District in California. That program, launched in 2008, was one of the country’s first.

“Back then there was a feeling that solar was too elitist,” he says. “Not everyone had access, renters were excluded, your roof had to be in good condition.”

So SMUD employees came up with a pitch: Build a large system and then sell it to rate-payers in increments, bit by bit. That didn’t fly with the company’s legal team because Securities and Exchange regulation usually comes with shared ownership, so they tweaked the idea. Now, participants “subscribe” to the infrastructure, which SMUD owns. Each month they pay a flat fee and receive a credit on their bill for however much their portion of the system generates.

Seattle City Light runs a similar program. Its first project, a set of panel-structures shading picnic tables in a local park, was completed in 2012 with the help of a $300,000 DOE grant.

“As we sold units of production from that facility, the money that came back from sales went into helping do the next project,” says Scott Thomsen, a spokesperson for the agency.

So far the agency has installed four systems; the others can be found at the Seattle Aquarium, the Woodland Park Zoo and on the roof of an affordable housing complex in Capitol Hill. Like SMUD, participants pay for a share of the infrastructure, which the utility owns, and receive monthly credits. In 2020, ownership of each system will transfer to the hosting entities.

Because utilities aren’t exactly buddy-buddy with rooftop solar right now (see any of these articles), both models stand out. According to Burke, certain things about the share strategy are particularly appealing: customer retention and the lack of maintenance and upkeep on myriad roofs. (It should be noted that customer retention isn’t a major issue for the Seattle agency, because solar leasing is mostly off-the-table in Washington State).

But the co-op structure doesn’t resolve bigger issues like storage and net-metering. Both SMUD and Seattle City Light are publicly owned municipal utilities. For the larger IOUs, whose investors depend on annual returns, it’s probably about as “disruptive” (to quote this report) as regular old rooftop solar.

And even for small municipal players, it poses some challenges. With a mix that comes primarily from hydropower, Thomsen says that Seattle City Light achieved carbon neutrality in 2005 — it likes alternative energy.

“Even with that focus, we realize that there are challenges within this space,” he says. “With net-metered community solar or panels on the roof, customers are paying below the operating cost of the wires.”

Net-metering, of course, is meant to incentivize clean energy production, which is why both California and Washington allow it in some capacity. Both states also have policies in place that favor shared systems (which the NREL report presents in great detail on pages 41-44).

But not every state offers such incentives, and according to the report, they’re crucial to those systems’ success. Because more than one money trail shows the Big Guy IOUs influencing state-level incentives and policies, solar shares, like individual rooftops, could be up for a fight on their way to widespread adoption.

For now, they’re far from that “100 percent” projected by the report. But state-level net metering disputes aside, distributed solar isn’t going anywhere. And for those without a sunny rooftop, solar cooperatives could be the Utopian next step.