Soap on Tap: Startup Arrives in NYC With a Plan to Take the Plastic Out of Cleaning Products – Next City

Soap on Tap: Startup Arrives in NYC With a Plan to Take the Plastic Out of Cleaning Products 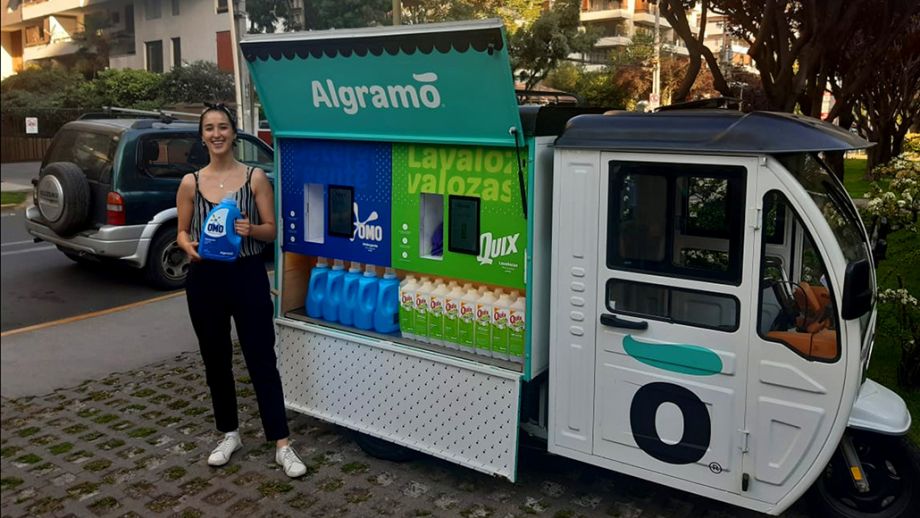 In 2011, José Manuel Moller was living in a low-income neighborhood in Santiago, Chile, with some of his university classmates. Moller was in charge of cooking and stocking the house with everyday items from local mom-and-pop stores. Given his limited student budget, he was continually purchasing the smallest sizes of everything — “a quarter-liter of coconut oil, a quarter-kilo of sugar,” he recalls — each in its own little throwaway container. Moller comes from a big family, so he had been used to buying these necessities in bulk. After a while, comparing notes with his mom, he realized that he was spending about 40 percent more than she was on household items — all because the smaller sizes, which have a higher packaging-to-product ratio, cost more.

Moller’s problem has a name: the poverty tax. Simply put, poorer folks wind up spending more on everyday goods and services, because they can’t afford the bulk-sized products that offer a better bargain. A big part of this problem turns out to be the packaging itself. As Moller discovered, packaging can make up as much as 40 percent of the cost of a product, particularly with lower-volume amounts of everyday goods. “It’s absurd that we’re pushing the poorest families to pay for something that they’re going to throw away, that’s also polluting the planet,” Moller says.

With a background in business administration, and with funding from some local contests, Moller designed a company called Algramo. The startup, launched in 2012, provides an efficient, automated bulk-dispensing system for staple food and cleaning products — opening up economies of scale to customers at all income levels. And it’s BYORP: bring your own reusable packaging.

Algramo — which in Spanish means “by the gram” — now has over 2,500 locations in Chile, offering classic brands of household goods at surprisingly cute refill kiosks, and even home delivery on electric tricycles.

In the early days, Algramo mainly dealt in bulk food items like rice, beans, and lentils. They also tried out an original powdered laundry detergent, as a competitor to products from the international giant Unilever — but there were some hiccups. (Imagine: powdered detergent getting stuck in a bulk dispenser on a hot, humid Chilean day.) Chiefly, though, Moller realized that he wasn’t going to have the biggest impact by competing against big, established companies. What he wanted to do was work with them, and help them begin to change their wasteful packaging practices.

“We don’t have time to give us the privilege of being a competitor,” Moller reflects. “Today, we are pushed to collaborate — otherwise, we’re not going to reach the standards and agreements that will prevent catastrophic climate change.”

So Algramo began carrying classic products from major companies, including Unilever — and has been steadily growing, and expanding its ambitions. With capital and guidance from New York-based investment firm Closed Loop Partners, Algramo just made its U.S. debut in the Big Apple, with kiosks in Brooklyn at the Navy Yard and a laundromat in Bed-Stuy, and Essex Market on Manhattan’s Lower East Side.

The refill system of the future

In New York City, Algramo kiosks offer four high-demand cleaning products: EcoLogic hand sanitizer, Clorox Bleach, a multi-surface cleaner made by Pine-Sol, and Softsoap liquid hand soap. The pilot is focused on mixed-income neighborhoods. Moller has found that Algramo has two main target audiences: cash-strapped shoppers and eco-friendly shoppers. “And they could be in the same place, and even could be the same user,” Moller adds. In fact, that’s part of the point. “With Algramo, we’re trying to show that you can be as eco-friendly as the hipster in Manhattan, but you’re paying as little as a low-income consumer,” he says.

Here’s how the system works: The first time you visit an Algramo station (essentially a high-tech vending machine) you’ll buy a standard container of, say, liquid hand soap. It’ll be in its usual packaging, with Softsoap’s recognizable branding, and important label information like ingredients. But the container will have a radio-frequency identification (RFID) chip inside it, with a unique ID that you can attach to your account in the Algramo app. When you run out of soap, you log into the app and add money to your “wallet” — which is the container itself.

When you go back to the kiosk, you’ll pop your empty, RFID-enabled Softsoap bottle into the correct slot and let it refill as much as you need, like you would at a gas station. The chip communicates with the system to deduct money from your virtual wallet. (As a multinational company, Algramo follows European standards for information security — which are more stringent than U.S. laws.)

The idea is to place value on the packaging, turning it from something you throw away to something that you actually use to buy more of the product. As Moller points out, you may forget to bring your reusable shopping bags to the store on occasion; you never forget your wallet.

“Over the last three years or so, the public narrative around single-use plastics in particular has become louder and more consistent,” says Bridget Croke, managing director at Closed Loop Partners and an Algramo board member. That consumer drumbeat, combined with regulatory advances, has put pressure on companies to switch more quickly to reusables. At the end of the day, she says, it also makes economic sense. Packaging is a cost for manufacturers as well as consumers. If companies can eliminate that cost, give customers a better experience, and help the planet kick its deadly plastic addiction, it’s a win-win all around.

According to Croke, the time is ripe for innovative startups like Algramo to step in and fill that need on a broad scale, with the help of new technologies. “It’s not the old-school model that you’d see with the bulk section at the co-op,” she says. “That may be coming back as well — but we’re in a world now of leveraging modern technology to create refill models that are convenient, engaging, and cost effective.”

The pandemic as a turning point

The COVID-19 pandemic has been an enemy to reusable packaging in many ways, but it actually sped up Algramo’s arrival in the States. Three aspects of the service make it well-suited to pandemic times. One is obvious: It offers a convenient source of cleaning supplies and hand sanitizer. Two: It’s an essentially touchless system. There is no cashier at the kiosk; the packaging is yours, the refill is automatic, and the payment is digital. You don’t need to elbow hippies out of the way to scoop dry goods from a communal trough at the co-op.

And three: In a time when the supply chain is stressed, simplicity is in everyone’s best interest. “We’ve heard from some companies that parts of their packaging are causing shortages in their supply chains,” Croke says. For instance: not enough pumps for soap dispensers. If consumers can reuse their dispensers, that’s one less component that needs to be sourced in a time of shortages.

With the shakeup created by COVID, adds Croke, “there’s an opportunity for behavior and system change in a way that doesn’t exist when you’re kind of going through your life in the usual ways.”

For his part, Moller would like — and expects — to see refill become a standard all over the world. After its debut in New York this fall, Algramo will be expanding into Indonesia before the end of the year. And other companies are getting on the reusable-packaging train, including some heavy hitters. In partnership with the Ellen Macarthur Foundation and its New Plastics Economy initiative, over 100 businesses have committed to move from single-use to reusable packaging by 2025. Some of the signatories, such as Unilever, Nestlé, and Clorox, are partnering with Algramo to help get them there.

Moller welcomes the collaborations, and even the competition. “Our aim is to target the poverty tax and the plastic waste,” he says. “If someone else is helping us to reach that, great.”

This story was originally published in Grist, and is reprinted here as part of the SoJo Exchange from the Solutions Journalism Network, a nonprofit organization dedicated to rigorous reporting about responses to social problems.