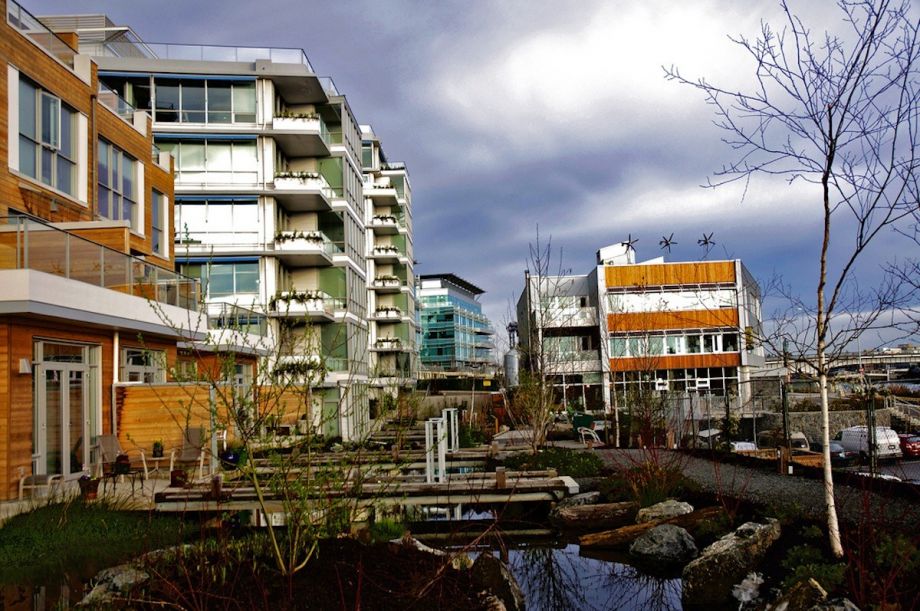 The high-density community, built on a revitalized former brownfield site, is designing workforce rental housing targeting those earning $25,000-$60,000 per year. Forty-nine affordable homes are on the drawing board, from studios to three-bedroom apartments. The project is expected to break ground in 2016, with completion scheduled for 2017. Affordable rental units that were on the drawing board when the project first launched in the mid-2000s were put on hold due to the recession, according to Ally Dewji, the community’s development manager. With the economy turning around, the community revisited its master plan, working with HCMA Architecture + Design to jumpstart the apartments.

Last year, Vancity Credit Union, which owns Dockside Green, brought in the Catalyst Community Development Society (CCD) to develop and own the units. CCD is a Canadian nonprofit that creates affordable housing and workspaces for community-based organizations. “We are adopting a relatively new model for this project by using ‘social’ equity — which is equity invested by foundations and individuals interested in investing money [in projects] which provide significant community benefit while receiving a fair financial return,” says CCD President Robert Brown.

While the original plan was to distribute 26 affordable units throughout the development, the new rental units will be grouped together in two three-story buildings for the sake of efficiency and cost-effectiveness. The project still needs to overcome a few zoning hurdles, but it does support Victoria’s objective of creating 50 percent of the city’s new residential housing within its urban core.

Prospective residents will be able to submit applications when the municipal approval process is complete, which will likely occur by the end of the year. Beyond the financial qualifiers, CCD and property managers expect “significant diversity in the residents including singles, couples, families and seniors,” Brown explains. “To be ‘smart,’ cities need to have a broad diversity of income ranges, with housing made available to sufficiently serve that full range …. A healthy, robust and flourishing city or community can only be achieved [through] diversity in demographics and incomes.”

The first LEED for Neighborhood Development project in Canada, Dockside Green’s first units opened in 2008, and the community touted — and the media reported — its “green” status. Located on the inner harbor in an area once home to an oil refinery, heavy industry and vacant buildings, and planned by architects Busby Perkins+Will (the project transitioned to the architects at HCMA in 2008/2009), there are now about 500 residents.

Wastewater is treated onsite and reused to flush toilets and irrigate the grounds. Excess treated wastewater is sold for industrial use. An onsite biomass gasification plant powers the community with renewable energy. Bike racks are available in every building, and the neighborhood even boasts Victoria’s first bike barometer that displays the number of daily bicyclists and an annual total. (Future bicycling improvements can be made based on the data it collects.)

Units in the eco-conscious community are built to be 50 percent more efficient than code thanks to details like energy-efficient lighting and water-saving fixtures. Each unit is also equipped with its own utility meter that tracks energy and water usage in real time.

The Dockside Green project has the potential to be a small bright spot in the smart cities debate that sees critics arguing that such eco-friendly, tech-forward developments leave the poor behind. Lavasa, India’s first smart city in a plan that envisions 100 such places, is a luxurious private development that The New Internationalist’s Tarsh Thekaekara contends will do little to help the poor, noting its displacement of local villagers and indigenous people. The question of inclusivity isn’t relegated to developing countries. A “rise of gated communities covered in blankets of digital sensors” may await us, Anthony Townsend, author of Smart Cities, has warned. High-tech living may be unfamiliar to the poor and the elderly. The computerized “gates” of tomorrow’s smart cities will be invisible, Townsend argues, with the digital divide making them inherently exclusive.

With benefits such as energy efficiency, streamlined traffic and pollution reduction perhaps Dockside Green’s renewed focus on affordable housing can offer an optimistic counter to these arguments.

Still under development, the neighborhood will be built out over 12 phases. Once completed, an estimated 2,500 residents will be living at Dockside Green — and could be a neighborhood for all income levels.

According to Brown, “safe, secured, community owned and operated housing at a truly affordable rent is key to building communities that are healthy and vibrant.”

Editor’s Note: This post was updated to reflect HCMA Architecture + Design’s involvement in the project.

Kate Dougherty is a freelance writer, researcher and geographer. She has written about science, technology and the environment for ideaCONNECTION, Healthy Times Indonesia Magazine, EnvironmentalScience.org and InternetTutorials.net.