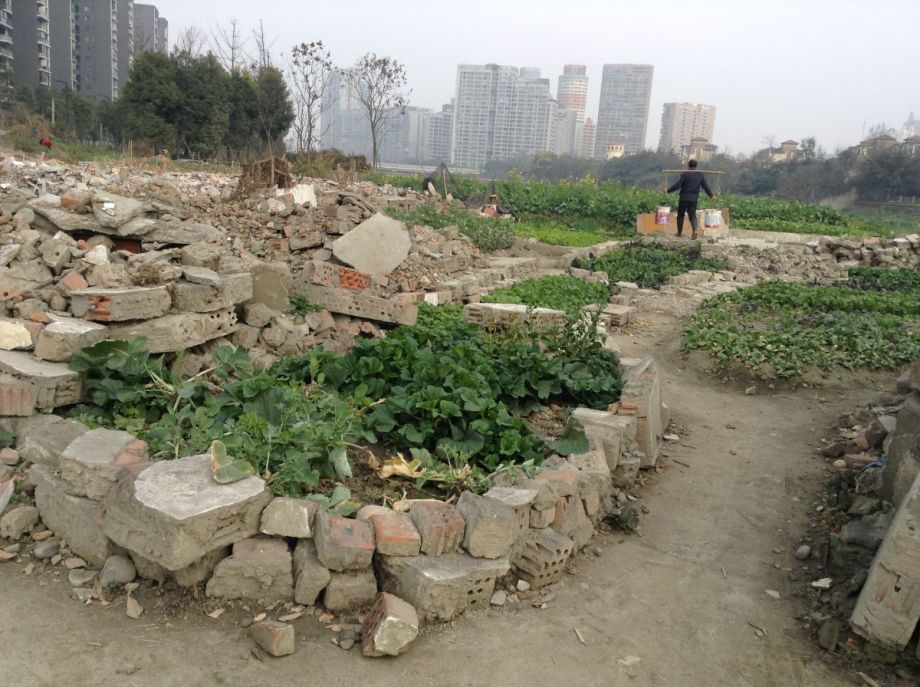 In rapidly urbanizing Chengdu, the old agricultural ways of the region are reasserting themselves.

For centuries, the Chinese have referred to the fertile region around Chengdu, capital of Sichuan province in southwestern China, as the “Land of Abundance.” Here, rice grows year round, fruits and vegetables of all kinds flourish and water is plentiful. Even today, as a highly urbanized area, Chengdu is flush with produce throughout the year, and few places anywhere boast the diversity of the city’s harvest. Researchers even once traced the origins of the Georgia peach to an area just south of Chengdu.

But China’s exploding urban centers – Chengdu now has around 20 million inhabitants – are taking their toll on the land. Farmers are leaning on chemicals to boost their crops as more and more people leave the fields for the city. The soil is suffering, and people are increasingly wary of the quality of the city’s food. Meanwhile, factories have sprung up along the banks of the Min River, a major source of Chengdu’s water. Roughly 60 percent of China’s groundwater supply is “very poor” to “relatively poor,” and the air pollution has been likened to “nuclear winter” in some northern cities.

But local Chengdu people are a rare breed in China, known for taking risks that wouldn’t fly in far-away Beijing. Chengdunese are known as lovers of life, tea, poetry and wealth. With all of the abundance the Chengdu Basin has to offer, it’s no wonder the populace here has become accustomed to living large and eating well. Now, after a half century of political turmoil followed by three decades of headlong growth, the people of Chengdu are trying to reclaim their reputation for abundance. Perhaps ironically, such efforts start small.

Chengdu’s professional class has found an interest in biodynamic farming.

An hour north of Chengdu, in the satellite city of Dujiangyan, where the Min River is tamed and harnessed by an ancient, extant dam, a huge plot of land is slowly being turned into a biodynamic experiment. Over four days in late May, 60 locals gathered at the plot of land to learn biodynamic farming from Harald Hoven, a master gardner and founder of the Biodynamic Association of Northern California (BDANC). His wife, Cynthia, teaches eurhythmy, a dance art developed by Rudolf Steiner for the Waldorf education system.

There is a small kindergarten on the land — only five students so far — but the group is excited and passionate: for the men and women here to learn, this is a matter of huge importance. They either heal the land and create a steady, healthy supply of food for their children, or they risk consigning their city to a contaminated, pesticide-poisoned food supply pulled from polluted soil. It’s not just about cleaning up the environment, but about creating a new relationship between people and the earth.

After almost a century of mismanagement and estrangement from nature, Chengdu’s middle and upper-middle classes are discovering an interest in alternatives like biodynamic farming. Along with ancient Taoist philosophies, these German and Australian farming methods are helping residents rebuild a healthy relationship with the fruitful land around them. Yet as the Min River flows south, past the Dujiangyan irrigation project and through the city of Chengdu, another example of reconnection with the land can be found – one that’s less a trendy pursuit of China’s burgeoning urban professional class, and more a return to a time long past by those who remember Chengdu before it boomed.

Beneath its urban surface, Chengdu has some of the most fertile soil in China.

In this case, tiny gardens sprout along the muddy banks between construction pits and half-built towers. Locals hack gardens out of the ruins of old homes and factories, and separate them from each other with makeshift walls of stone, wood, bamboo and the flotsam of an urban riverbank. These gardens are the work of the previous generation: men and women in their fifties and sixties, people who were foot soldiers in the Cultural Revolution, sent down to the countryside from the cities to learn the ways of the farmer. The majority have bought homes in the new apartment complexes along the river, and the gardening is “just for fun,” they say, something to do while their grandchild sleeps and their son is off at work.

But the back-breaking work they put into recreating their agricultural past in the urban rubble of Chengdu suggests that more than simple fun underlies these efforts. I watched an old man take a sledgehammer to the concrete floor of an old hut until he reached soil. Then he built a wall around his little garden plot with the craggy shards he’d just demolished, and planted onions, cabbage and garlic in the peaty soil beneath. Another old Revolutionary built himself a shack from the debris of a nearby work site and bred chickens there. Old women from the new apartments came down to his filthy hovel and bought the chickens up. A group of fishermen threw a small net across the mouth of the sewage drain and picked out a few tiny little fish at a time.

In each of these acts, the resilience of the city’s food-producing past peeks through. Chengdu may be changing, propelled to extreme new urban heights by the central government. But the old folks haven’t lost their relationship with the land. They remember that Chengdu is a place where everything grows, even amidst the muck and slime of a mushrooming urban space. It’s part of their identity that no plot of land should go uncultivated in Chengdu, no matter what. Looking at these two groups, it’s hard to determine who is the more resilient: the old folks and their urban plots, or the new generation and its dreams of a biodynamic paradise.