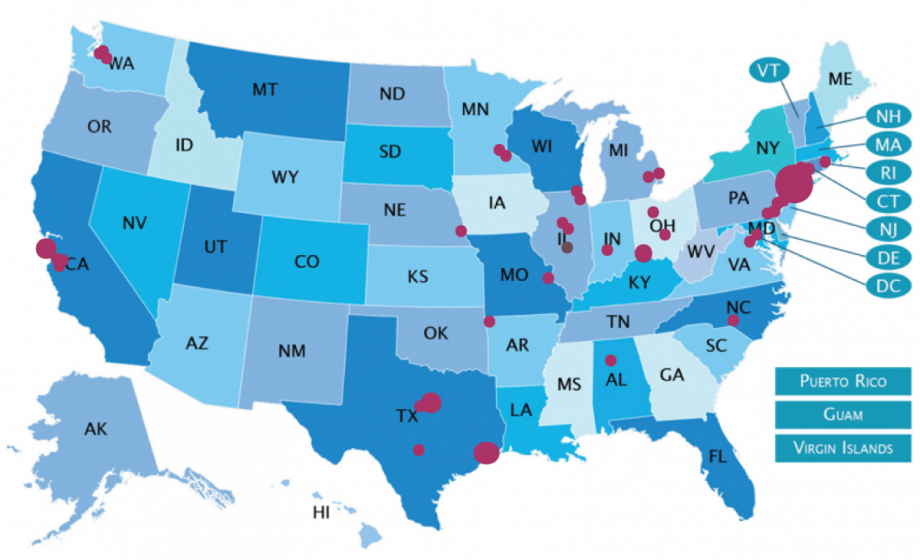 Map showing where the top 50 companies on the Fortune 500 list are located. Credit: Isaac Riddle

The nation’s most profitable companies are proving that they don’t have to be headquartered in a New York City or a Chicago to find success. Fortune magazine released its annual rankings of Fortune 500 companies this week, and nearly half of the top 50 are headquartered in small cities with fewer than 150,000 people.

Where Fortune 500 are headquartered makes up as diverse a list as the companies themselves. Walmart, coming in at number one on the list, is headquartered in Bentonville, Ark., a city of about 36,000 people. Meanwhile number-four ranked Phillips 66, a holding company of ConocoPhillips, is based in Houston, Texas, a city of more than 2.1 million.

Half of the top 10 companies have headquarters in small cities, and one-fifth of the top 50 can be found in cities with fewer than 50,000 people.

Two of the top-ranked Fortune 500 companies aren’t in cities at all, but incorporated areas with fewer than 10,000 people. AmerisourceBergen, a drug wholesale company, is headquartered in a town with fewer than 5,000 people. So is IBM, headquartered in the affluent NYC suburb of Armonk, despite the tech corporation’s urban-focused work such as the Smarter Cities Initiative.

Not surprisingly, New York houses the most Fortune 500 companies, with seven of the top 50 headquartered there. Houston and San Francisco were the only other large cities — those with populations of 450,000 or more — to house more than one top-50 company.

Cincinnati was the only mid-sized city (those with between 150, 000 and 450,000 residents) to have more than one top-50 company headquartered within city limits. No small city housed more than one.

More Fortune 500 companies are in small cities then either large- or mid-sized cities. Credit: Isaac Riddle

There are many factors that determine where companies choose headquartered, but certain industries tend to cluster together. Houston is home to multiple oil companies, including two top-50 companies on Fortune’s list. The San Jose region has Apple and other large tech companies. However, for other companies such as Walmart, the headquarters depends on where the founder came from.

“There have been studies of founder-driven corporations that get big, and they are invariably close to the founder’s home,” Audible.com CEO and founder, Don Katz, told Next City in a March interview. Katz chose to move Audible to Newark, N.J. partly because of the city’s proximity to his home in Montclair.

Car companies like General Motors and Ford have historically clustered in Michigan, the home state of automobile inventor Henry Ford.

Additionally, many companies choose mid-size and smaller cities because operational costs are cheaper when compared to large cities. “The cost of our space [in Newark] is a fraction of what it would cost in Manhattan,” said Katz in the same interview.