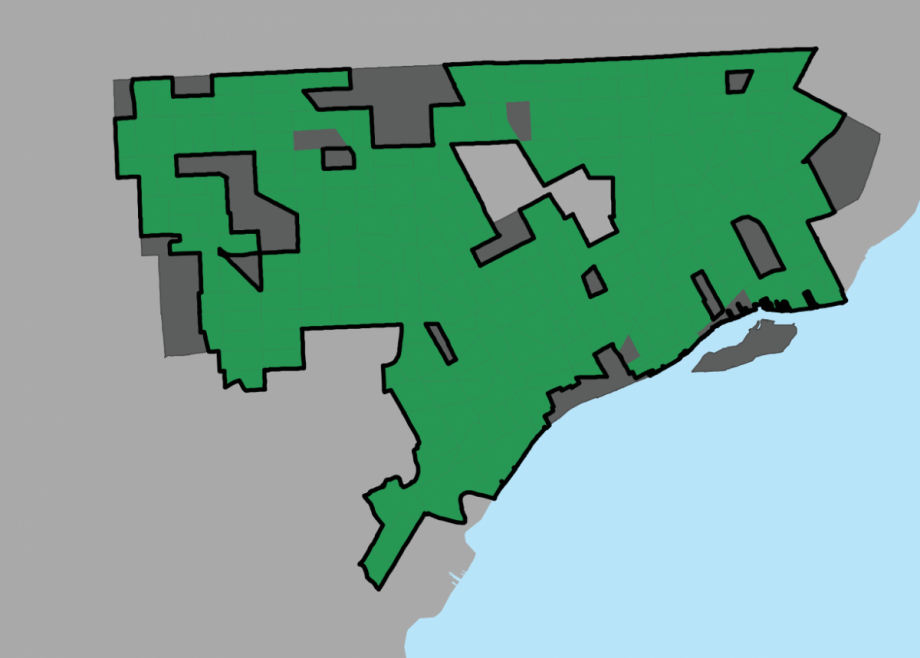 Small businesses account for the majority of jobs in Detroit's low-income, high-poverty neighborhoods, shaded in green. (Credit: Institute for a Competitive Inner City)

Despite all the talk and headlines about the tens of thousands of jobs promised by big tech companies such as Amazon coming to a new city, residents of low-income, high-poverty neighborhoods know that it’s the small businesses that provide most of the jobs in their cities, and especially in their neighborhoods.

So it is with great interest every year that the Federal Reserve system puts out its Small Business Credit Survey, as it did yesterday.

Expectations for growth among small businesses are at their highest levels since 2015, according to the survey results, compiled over the last six months of 2017. Some 66 percent of firms anticipate revenue growth in 2018, while 44 percent expect to hire new employees. Meanwhile, 40 percent of firms said they applied for financing in 2017, a drop from 45 percent in 2016. Of those who applied for financing, 59 percent applied for the purpose of expanding their business, while the rest applied to smooth out cash flows or refinance previous debt.

But only 46 percent of businesses that sought financing got all of the capital they needed — a figure on par with previous years.

Taking a slightly broader scope of small businesses than the Institute for a Competitive Inner City, the Federal Reserve study defines small businesses as those having up to 500 employees. The survey garnered 8,169 responses, grouping them into seven categories: professional services and real estate; non-manufacturing goods production and associated services; retail; healthcare and education; leisure and hospitality; and other.

While there was some variance across the different industry categories, expansion or new business opportunities was the top reason for businesses applying for finance across each group.

A large proportion of firms across all industry groups reported having enough cash on hand or an aversion to taking on debt as the reason for not seeking credit.

Over time, online lenders have been at the bottom of client satisfaction, but have also shown the most improvement since 2015.

But in the grand scheme of things, the main source of funding for small business growth or expansion has been and continues to be the businesses themselves. And in instances where small businesses have needed external capital, personal finances remains a major source of funding — putting entrepreneurs of color at a constant, inherent disadvantage to white entrepreneurs owing to the racial wealth gap created by the long history of race-based discrimination in lending and housing policies in the United States.