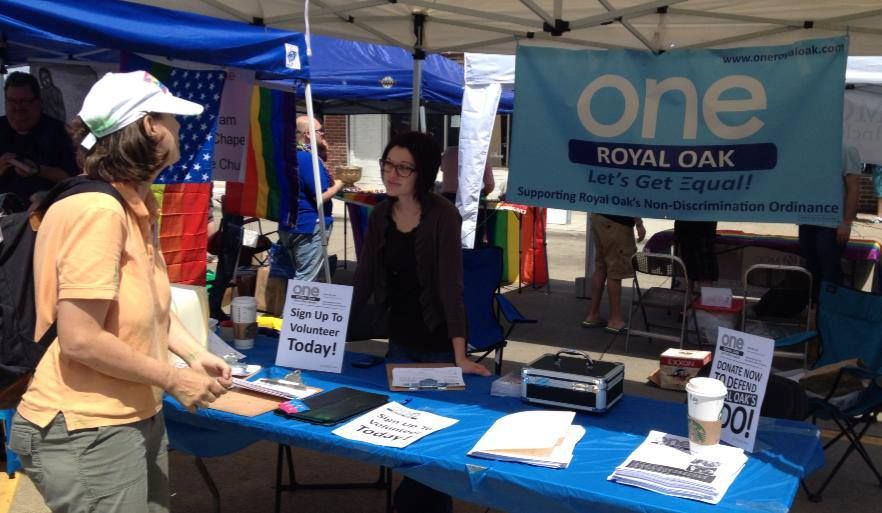 One Royal Oak recruiting volunteers this summer, during their Proposal A campaign. Credit: One Royal Oak’s Facebook page

Was 2013 the year for cities to recognize transgender rights?

This past Election Day, voters in Royal Oak, Mich., said yes to a human rights ordinance that for the first time in the small city’s history made it illegal to discriminate on the basis of sexual orientation and gender identity, as well as other identifiers.

With this locally contentious but nationally overlooked ballot win, Royal Oak became the sixth American city this year to put such a law on the books, following Linden, Mich.; San Antonio, Texas; Sacramento, Calif.; Phoenix, Ariz. and Coeur d’Alene, Idaho. In total, there are at least over 190 municipalities with fully inclusive nondiscrimination laws on the books, but what is notable about these recent additions is that none are places with a particularly strong or visible queer community. The movement is broadening beyond its coastal, big-city roots and hitting places where a decade ago, even talking about sexuality in City Hall would be a reach.

For transgender advocates, the legislative wins in small and mid-sized cities are important victories on the road to full equality. Not everyone can or wants to live in the Bay Area or New York and wherever people are, they deserve protection. In a June interview, Allison VanKuiken, campaign manager for One Royal Oak (the non-profit organization behind the push to pass Proposal A) told The Oakland Press that local human rights ordinances are a matter of “fairness”—especially in Michigan where the state’s anti-discrimination law only lists race, sex, national origin, age, height, weight, familial/martial status, and religion as protected classes. Since the summer, One Royal Oak volunteers canvassed the streets and made phone calls to educate voters about the ordinance and its purpose, as well as dispel misinformation that the law was already in effect at that time.

“We feel great, and this is a victory for the people of Royal Oak today,” One Royal Oak spokesperson Jon Hoadley told The Detroit Free Press the day after Proposal A passed. “This shows that Royal Oak values fairness and equality, and it means that everyone who lives here or works here is going to be able to show up as who they are without fear of being fired or losing their home just because of who they are.”

But while the laws protect all trans-identified people from discrimination, they hold a special resonance for the one in five transgender people experiencing homelessness by expressly prohibiting homeless shelters from denying equal access on the basis of gender identity or expression. According to a 2011 report, 29 percent of homeless individuals were denied access to a shelter because they were transgender or gender non-conforming — with higher rates seen among transgender women, Latino/a and black respondents. The study also found 42 percent were forced to stay in facilities opposite their gender identity, while 55 percent reported experiencing harassment, 25 percent experiencing physical violence and 22 percent experiencing sexual assault.

“[They] tell shelters, it tells trans residents — it tells all residents — that that city values its trans and gender non-conforming citizens and is taking steps to protect them,” asserts Mason Dunn, 28, executive director of the Boston-based Massachusetts Transgender Political Coalition (MTPC).

It’s been a long road for the Boston-based transgender advocacy group, which was founded in 2001 to address the lack of protection for transgender residents in the Northeastern city. In its first year as an organization, MTPC was instrumental in passing Boston’s own non-discrimination ordinance in 2002, as well as a similar law in Northampton, Mass. three years later. In both cases, the non-profit organization worked with the respective city councils, held public campaigns to educate on transgender issues and rights, and rallied transgender residents to testify at the ordinance’s hearing. MTPC and the Transgender Equal Rights Coalition is currently working with policy makers and community activists to pass The Massachusetts Public Accommodation Law, which will close the public accommodation protection loophole left by the state’s “An Act Relative to Gender Identity,” which passed in 2011.

But nondiscrimination laws aren’t end-all, be-all solutions. In spring of this year, two homeless transgender women filed separate lawsuits against John L. Young Women’s Shelter in Washington, D.C. — which also has a fully inclusive anti-discrimination law on the books — for refusing their stay. In a similar move, the Gay & Lesbian Advocates & Defenders (GLAD) recently filed a lawsuit against a North Shore, Mass. homeless shelter for turning away a transgender teen last year and suggesting she sleep on a storage room mat, according to Boston.com.

More egregiously, though, a Boston transgender woman was arrested and stripped searched in 2010 for refusing to leave the women’s restroom of a Boston Public Health Commission-run shelter, on the order she wasn’t allowed in there while other women are present — despite the city ordinance and BPHC protocol stating transgender guests should use facilities aligned with their gender identity. (She was paid a total of $30,000 earlier this year by BPHC and the Boston Police Department in exchange for dropping her lawsuit against the city for unlawful arrest and treatment, reported The Boston Globe.)

“In most shelters, they have no clue what is considered proper, moral or progressive,” says Michael Stoops, director of community organizing at the National Coalition for the Homeless (NCH). “Their best solution, which is horrible, is having the [transgender] person ostracized and told they can sleep on the couch in the TV room or you could only use the bathroom or shower facility at 3 o’clock in the morning.”

The problem is so endemic that Stoops’ group went so far as to create a guidebook with NGLTF about how to create safer homeless shelters for transgender people. Next year, the decade-old guidebook will be updated with a 2012 final rule implemented by U.S. Housing and Urban Development [HUD] prohibiting sexual orientation and gender identity-based discrimination in HUD-assisted or funded housing, including shelters, and by Federal Housing Administration-insured mortgage financiers.

Beyond rules and guidebooks, Dunn and Stoops say that cities should work to develop advocacy campaigns and/or speakers bureaus that feature the lives and stories of transgender people. The public must see the trans community as part of the larger community, they say.

“One interaction does more than any training curricula would ever do,” Stoops says.

And like with so many other issues of public accountability, open data matters. Dunn recommends that city agencies compile data of when and where discrimination occurs at shelters in order to track and better understand patterns of discrimination. The data, he says, will help public leaders develop a solution for moving forward. And it will also allow cities to put other shelters “on notice,” while publicly recognizing those shelters “doing right.”