SLIDESHOWS: Public Space and Protesting the Zimmerman Verdict – Next City 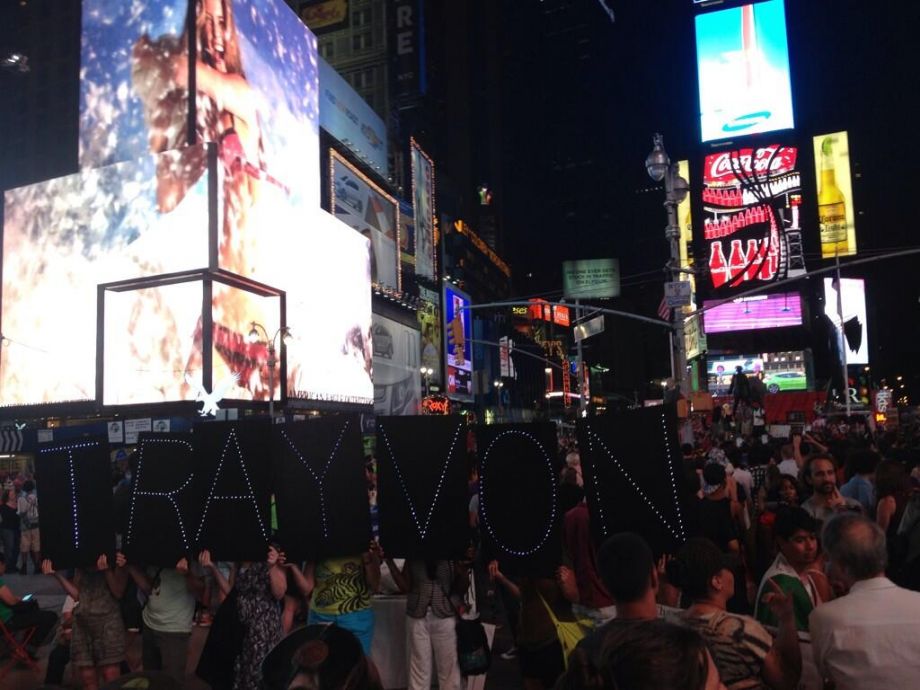 It was Saturday night when a six-member jury found George Zimmerman not guilty of murdering Trayvon Martin, the unarmed teenager gunned down following an altercation with Zimmerman in a Sanford, Fla. gated housing complex last year.

Yesterday, thousands of people gathered in cities around the country to protest, among other things, the jury’s decision, Florida’s “stand your ground” laws and the societal treatment of young black men in general. In doing so they turned ordinary, well-known public spaces — such as Times Square in New York, Love Park in Philadelphia, Daley Plaza in Chicago — into forums where an outraged community could voice its frustrations and demand change. With a few exceptions in Oakland and Los Angeles, the demonstrations were peaceful.

New York City drew out the largest demonstration, with between 1,000 and 2,000 people amassing at Union Square in the afternoon before marching 20-some blocks uptown to swarm Times Square by nightfall. About a dozen people were arrested.

Protesters in Philadelphia aired their grievances at two of the city’s most visible landmarks: Love Park and the Liberty Bell. About 700 people marched from the park through Center City to Independence Mall and back without incident.

Love Park is no stranger to public discontent: Besides Robert Indiana’s LOVE sculpture, the space is perhaps best known as an eminently skate-able place with a comically ignored skateboarding ban.

“At least 150 people” in Chicago held a protest outside the Richard J. Daley Center in The Loop, according to the Chicago Tribune. Named after the Windy City mayor who presided during the violent anti-Vietnam War protests outside the 1968 Democratic National Convention, the Center and its courtyard, Daley Plaza, house a major portion of the Cook County court system, among other things.

A number of protests occurred across Los Angeles yesterday, though the most intense involved about 200 people blocking traffic on Interstate 10 in Crenshaw. The demonstration lasted for about half an hour before police officers reportedly fired rubber bullets to disperse the crowd, according to local media reports.

Known as the 10 Freeway, the road in question is so frequently congested that it inspired a now-dormant parody Twitter account. However during the protests there were, per a local NBC affiliate, “no cars in sight.”