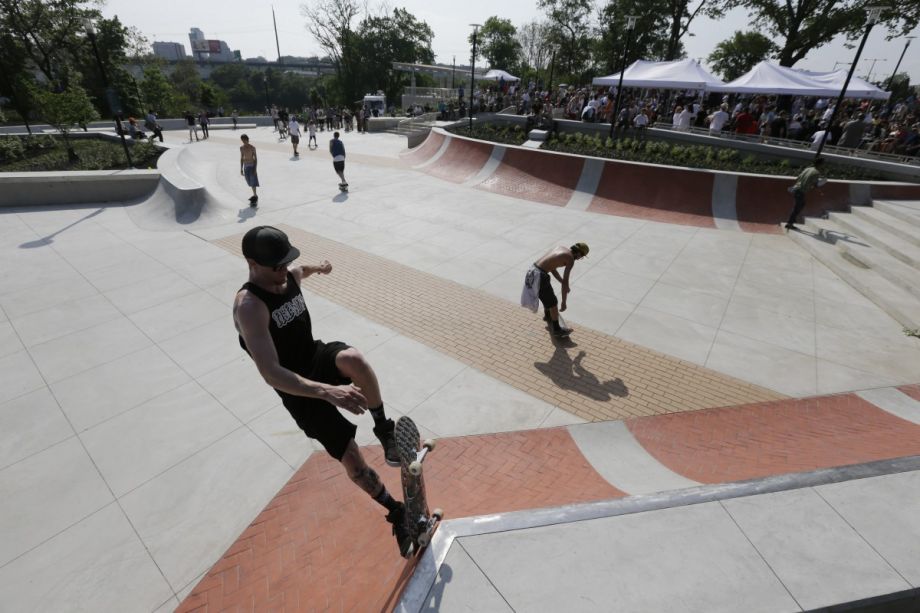 On a Thursday afternoon in autumn, there are close to a dozen skateboarders and BMX riders weaving around Paine’s Park obstacles and each other. Josh Dubin, the executive director of Franklin’s Paine Skatepark Fund, explains that if school weren’t in session, there would be more. The Philadelphia skatepark, now open for more than a year, is the pride and joy of Dubin’s skateboarding advocacy non-profit, which works to establish new parks in the City of Brotherly Love. Runners following the adjacent Schuylkill River Trail pass by. A mother pushing a stroller cuts through a grassy inlet. “It’s like a park,” says Billy Mahoney, 20, who skates at Paine’s Park a couple of times a week, on the different kinds of visitors he sees.

Critics have praised Paine’s Park, a space that very easily could have been a large cement bowl, for accommodating multifaceted use. At one glance, it looks very much like a plaza. From slightly higher ground, its amphitheater design is more apparent. The tiered ledges curve in the direction of an elevated stage. Complex named Paine’s Park in its list of world’s most innovative skate parks.

Inga Saffron, the Philadelphia Inquirer’s architecture critic, noted in her review that Franklin’s Paine Skatepark Fund had to raise $4.5 million to bring their vision for Paine’s Park to life, and they did so by “badgering state, city, and private funders to pay for the project.” The space reveals the shift in how skateboarders and architects imagine skateparks. But it also represents a surge of civically engaged skateboarders who are taking city building seriously. The kids who clung to their boards in the ’80s and ’90s have grown up, some of them into advocates. San Antonio has a “skate plaza” program. Seattle welcomes boards not only to skateparks, but “skate spots” (1,500 to 10,000 square feet) and “skate dots” (smaller than 1,500 square feet). Portland’s system has branched out to designate skateboard routes in the city’s downtown.

We may be nearing the day where skateboard urbanism is a thing. This urbanism would be interesting and tasked with a lot: public spaces and skateways that can accommodate a sport for both forward movement and stunts, while not scaring away mothers out for walks with their children.

“The pendulum of history is swinging back towards cities now,” says Dubin. “This is a challenge that cities are facing: How do you incorporate skateboarding and people who want to engage in the activity into the urban landscape in a cohesive and comprehensive way?”

When making their case for more skateparks, the Seattle Skate Park Advisory Committee started crunching numbers. Three years prior, the near-demolition of the cherished Ballard Bowl had planted the seeds for SPAC’s establishment. The local skateboarding community rallied to save the bowl, their protests and petitions pushing the city council to formally recognize skateboarding in a resolution in 2006, as well as support the creation of a skatepark system. So in 2007, SPAC analyzed the data on how much square footage other sports could claim in the city’s public facilities. Tennis, with 44,507 local participants, had 369,600 total square feet of courts. Soccer, with 42,253 players, had 3,996,000 square feet of pitch. Skateboarding though, with 29,295 participants, only had 31,500 square feet.

Today, the city has four skateparks, 12 skate spots and eight skate dots. A conservative estimate of their square footage (that doesn’t include indoor skate centers) today is 115,908. Seattle built the first skate dots, one-off skateable pieces, some as large as a set of stairs, others as small as a bench or sculpture, all less than 1,500 feet. The idea came from a 2005 paper, “Integrated Skateable Terrain in Seattle,” authored by SPAC member Matthew Lee Johnston. These small interventions serve a couple of goals: For one, they carve out more spaces where skateboarding is permissible. Secondly, with thoughtful placement, they help to build a connected park system where skaters can practice tricks in one neighborhood, then head on their boards to another, finding skateable features along the way.

Ryan Barth, an environmental engineer and SPAC chairman, says their aim was that visitors “don’t just drive from one [park] to the next.” He adds, “Rather than having this outcropping of skaters that stay at one park and never leave, our goal is to try to make everyone around the city know each other.”

Cities and skateboarders around the country have built their own skate dots, but these features haven’t gone without complaints in Seattle. Neighbors in the Capitol Hill neighborhood have griped that their local skate dot has brought unwanted graffiti, noise and skating on other elements in the park, which is technically illegal. Barth hopes that creating more legal, graffiti-welcomed walls near skateparks will reduce stray tagging and help ease tensions. He also says an intelligent skate plan and public meetings are crucial.

“Only a few neighbors expressed concerns and a member of the SPAC (me in this case) was there to address (and mitigate) their concerns,” Barth said in an email. “But in cities with less experience on the siting, design and construction of skateparks these neighbor concerns are often the largest hurdle to siting legal skateable locations.”

Even with the resistance, skateparks appear to have an edge. The range of design options allow planners to start small when cash-strapped and reach audiences outside of teens with dreams of making the X Games. And with the diversity found among skateboarders, building a new bowl in the neighborhood may not stir fears of gentrification as other projects might.

According to market research firm Board-Trac, there are upwards of 12 million skateboarders in the United States. Cities are growing their skatepark infrastructure piece by piece. On the other side of the Schuylkill River, diagonal from Paine’s Park, sits Miles Mack, a park in the Philadelphia neighborhood of Mantua.

Kira Strong, vice president of community and economic development at the People’s Emergency Center (the local CDC), says that “90 percent of the park is in great shape” except for one underused corner.

Franklin’s Paine Skatepark Fund held a series of skate days and community meetings to discuss building a skatepark in that corner and settle on a design.

“In the beginning, people wondered ‘Is this a sport that people are really interested in?’ [They saw] there’s definitely a lot of kids who skate,” says Strong. Franklin’s Paine expects construction to begin on the 5,500-square-foot project in spring 2015.