Six Months After Sandy, New York has a Brand-New Recovery Plan and Plenty of People Still Displaced – Next City 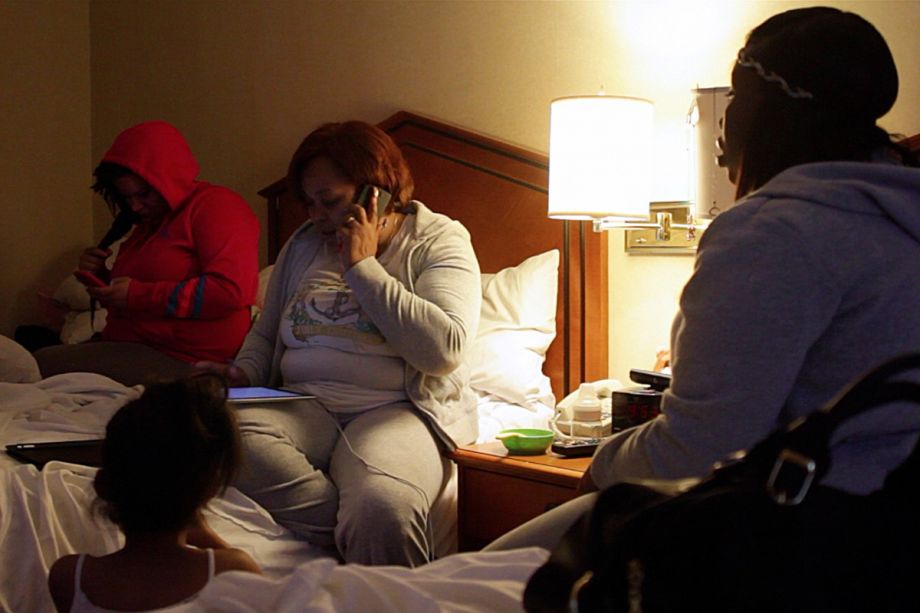 Cherrell Manuel with her daughters in the hotel room that became a temporary home after Hurricane Sandy. Credit: Juanita Ceballos

Cherell Manuel, 46, is left speechless every time Nah’Ja, her 7-year-old daughter, asks when she will be able to play in her own room again. “It’s frustrating because, as much as I want to, I don’t have an answer to her question,” said Manuel, a single mother who used to live in Far Rockaway.

Cherell and her four children are on their fourth stop since Hurricane Sandy flooded their rental apartment six months ago on Tuesday. There were two crowded evacuation shelters, and then two lonely upscale hotels in Midtown Manhattan. (Each night of tossing and turning in the hotel cost FEMA an average of $252 a night.) For the past 163 days the family has been living in cramped single rooms. Among the things Manuel misses most is a kitchen to cook meals for her children.

“It’s not easy. Every day is a journey, every day is a struggle, every day is a wait-and-see game,” said Manuel, whose Section 8 transfer voucher is set to expire on May 20. “I feel that I failed my kids because I haven’t been able to find a place that we can call home.”

“Right now we don’t know what’s going to happen. All we’re asking is a little more time and help.”

The city had planned to end the hotel shelter program on Tuesday. The decision would have put some 488 families out of their hotel rooms, though many of them were surviving on severly limited incomes and did not know where they would go next. After hearing from advocates like Giselle Routhier, a policy analyst at the Coalition for the Homeless, who argued the decision would risk “sending hundreds more storm victims into already crowded homeless shelters,” the city voted to push back the program’s end another month to May 31.

The extension, though necessary, will cost the federal government hundreds of thousands of dollars that could be better spent on permanent housing. (It has cost upward of $40 million to send some 1,800 households to more than 50 hotels and single room occupancies in the city. Of those, only 64 percent have been moved back to permanent homes.)

And now, many fear that the extra month will still not be enough. For critical observers, including the New York Legal Assistant Group, which spoke at Friday’s hearing, insufficient resources and unduly burdensome procedures have compounded with an air-tight housing market to make a tough situation even harder.

For these observers, the takeaway is that the local and federal disaster planning agencies must do more to address the needs of low-income populations if we don’t want each disaster to be followed by the rise in homelessness that came after Hurricane Katrina in New Orleans.

In the video below, Manuel talks about Sandy’s housing limbo:


Video from Juanita Ceballos on Vimeo.

Of more than half a million households across New York and New Jersey that registered for assistance from FEMA by February, 43 percent reported incomes of less than $30,000 a year, according to studies by Enterprise Community Partners and the Furman Center for Real Estate and Urban Policy at New York University. A whopping 68 percent of the renters had incomes of less than $30,000 a year. In New York City, 41 percent of the storm-impacted housing units were low-income, subsidized, rent-stabilized or Mitchell-Lama housing, while only one in 10 households were single-family homes.

“Much of the reporting on Sandy victims has focused on homeowners. Yet, 55 percent of the surge victims in New York were very low-income renters, whose incomes are $18,000 a year on average,” said Max Weselcouch of the Furman Center for Real Estate and Urban Policy in a release accompanying the March 2013 report. “These households were vulnerable before the storm, and programs to assist them will need to take their need for affordable housing into account in order for them to fully recover from the storm’s damage.”

For these households, the New York Housing Authority has made available 400 apartments and the Department of Homeless Services has given another 150 Section 8 vouchers for storm evacuees. Although NYCHA is granting Sandy victims the highest level of need-based priority, the application process can take at least four months.

And while Mayor Michael Bloomberg launched the NYC Housing Recovery Portal, intended to connect low-income Sandy evacuees with available apartments back in December, most of the households who signed up had incomes too low to even qualify for the units being made available.

On Friday, U.S. Housing and Urban Development Secretary Shaun Donovan announced his approval of a recovery action plan that will inject a combined $1.7 billion into rebuilding housing, infrastructure and business recovery activities.

Of that, $838 million will go toward housing programs while $415 million will be set aside to assist economic revitalization programs, according to HUD.

In its plan, New York officials make it plain that needs will go unmet unless the state identifies more funding. From the plan released by the state this month:

Once other forms of assisted are deducted from this amount, a balance of approximately $3 billion still remains in unmet needs. Since this anticipated amount of unmet needs exceed the entire amount allocated to the State, New York State has allocated the greatest amount of funding to address unmet housing related needs. It is anticipated that future tranches of CDBG-DR funds will be used to continue the efforts of addressing unmet housing needs in the greatest impacted areas.

How all this will unfold remains unknown. Let’s hope the plan’s execution is smoother than in New Orleans, where it took 6.5 years to remove the last FEMA trailer from storm-battered neighborhoods.