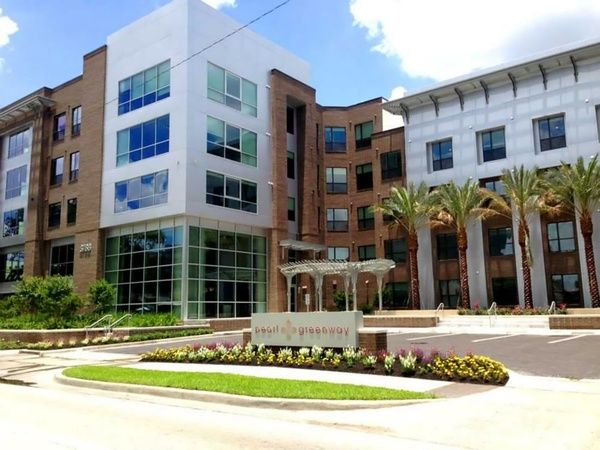 Pearl Greenway, a 341-unit building in Houston, near one of the city’s “five downtowns.”

Houston and its surrounding cities are notorious for their lack of planning. In the decades after World War II, this meant unfettered greenfield building opportunities, with suburbs sprawling in every direction for miles. While the sprawl machine is still hard at work, in recent years infill development — which has always been a part of Houston’s construction industry — has taken off, and the lack of planning is resulting in some surprisingly dense projects in areas where, were they in other cities, builders wouldn’t even think of poking the NIMBY hornet’s nest.

In a way, Houston is where more traditionally urban cities were before World War II, back when developers ruled and there was very little planning to speak of. Here’s a look at seven developments, from mid-rise apartment buildings to entire business districts, that have sprouted outside downtown Houston.

If you liked it, then you should’ve put a zoning code on it.

“Stop the San Felipe Skyscraper,” the neighbors’ signs read. Too bad, neighbors: Move to Dallas if you want a zoning code! That’s essentially what Houston-based national developer Hines told unhappy residents of the tony River Oaks neighborhood. Hines is plopping down a 17-story office tower — “boutique,” the developer called it, with its floors almost evenly divided between parking and actual usable space — in the midst of this quiet residential area. (The presence of a 34-story apartment tower a few blocks away, built in 1984 and aging surprisingly well, may have also alerted neighbors to the fact that a skyscraper might show up in their backyard at a moment’s notice.)

A building that would be at home on 14th Street in Washington, D.C. or, well, pretty much anywhere on the west side of Houston.

This 376-unit apartment building, announced last month, will appear on the site of what were once relatively sparse two-story buildings. A number of apartment and “townhouse” complexes already exist in the area, though this appears to be denser than the 1970s-era buildings nearby. It sits miles outside the 610 Loop that defines “urban” Houston, in an area with no light rail lines planned. In any other city, it would be zoned exclusively for single-family development. (The building will, however, be at the junction of two relatively frequent bus routes, which will likely become even more frequent after the city’s bus reorganization plan is completed.) Studios will start at $1,250 for 607 square feet, with the most expensive three-bedrooms coming in at $2,600 — about what you’d pay for an unrenovated prewar unit in a barely gentrifying Brooklyn neighborhood.

No sidewalks? In the middle of an industrial neighborhood? Right off a freeway? Perfect place for 200 apartments!

In some cities, land zoned for industrial (sometimes euphemistically referred to as “manufacturing”) purposes is jealously guarded against residential development. Not in Houston! The lack of a zoning code means there are no special hoops to jump through — no politicians to appease — for this 400-unit building announced in December on 15 acres of land, currently occupied by a grocery supply warehouse. At more than 25 dwelling units per acre, this is around the minimum density needed to supply light rail, which is as yet not planned for the area.

“The area has seen an explosion of new multifamily projects in recent years as developers scramble to keep up with demand,” reports the Houston Business Journal. “This site no longer suited the needs of Grocers Supply, particularly with the traffic along Studemont, which has increased significantly during the last few years,” the developer who bought the land told the publication.

Lovely place for a skyscraper, wouldn’t you say?

Not many cities — okay, no city outside Houston — would let a developer build an entire business district from scratch miles from the urban core, but that’s exactly what Gerald D. Hines did nearly half a century ago. Anchored by the Galleria mall, the largest in Texas, Uptown has emerged as a “downtown” to Houston’s western suburbs, centered on Post Oak Boulevard, just west of the 610 Loop. One of Houston’s “five downtowns,” Uptown has about as much office space as downtown Pittsburg or Denver. The Williams (née Transco) Tower, at 64 stories of glimmering glass, was at the time of its construction perhaps the tallest building in the world outside of a city’s central business district.

The neighborhood might have given Jane Jacobs a heart attack — its tall buildings are surrounded by what feel like endless expanses of open, green space, a sort of private-sector version of the Corbusian projects that Jacobs hated so much in New York — but the density is there, and it’s only getting denser. In fact, Uptown has grown so much that it is, in fact, getting rapid transit. Originally it was supposed to get its own light rail line, but the recession and resultant sales tax slump cut into Metro’s ability to finance it. Now, Uptown landlords are taxing themselves to pay for a bus rapid transit line.

And, for That Matter, Greenway Plaza

Uptown is not the only west side business district to sprout from nothing. There’s also Greenway Plaza, another one of the five downtowns. It is a bit closer to the actual downtown and within the 610 Loop, but nevertheless located amid suburban-looking single-family neighborhoods. Owned by Cousins Properties, the mixed-use development sprung up in the 1970s, around the same time as Uptown, and has millions of square feet of office space spread among 10 buildings. While the office towers are a bit dated at this point, the off-center business district has, like traditional business districts before it, attracted a fair amount of dense residential development. And while the property owners have not been able to cobble together enough money on their own to replace the light rail line that was once planned to run through the neighborhood, there’s no doubt that light rail will some day serve the area.

Would you like some mid-rise multifamily to go with your off-center business district? (Just kidding, you have no choice.)

At last there’s Pearl Greenway, a 341-unit building by the same developers working on 2033 South Gessner, mentioned above. Built on the site of a (very) postwar Presbyterian church, it’s wedged in between Greenway Plaza to the south and single-family, barey-gridded neighborhoods to the northwest — which are themselves going through somewhat of a process of densification, with single-story ranch homes being remade into roomier McMansions.

Just because Houston doesn’t have a zoning code doesn’t mean that neighbors, if sufficiently wealthy, won’t fight a project. Sometimes, they’ll win. The would-be builders of the most controversial building in Houston, 1717 Bissonnet — or, to a certain crowd, the Ashby high-rise — got taken to court over the 21-story tower planned for a residential neighborhood near Rice University. And the neighbors may prevail. A jury found the building to indeed be a nuisance and ordered the developers to pay more than $1.6 million in damages. Still, it remains to be seen whether the building will rise, as the developers have vowed to keep on fighting, and a construction injunction has not yet been handed down. Still, many are worried about the fallout from the case, and whether it will dent Houston’s development-friendly image and set a precedent for future suits.