Photos Signal Warning About a Future of Flooded Cities – Next City

Photos Signal Warning About a Future of Flooded Cities 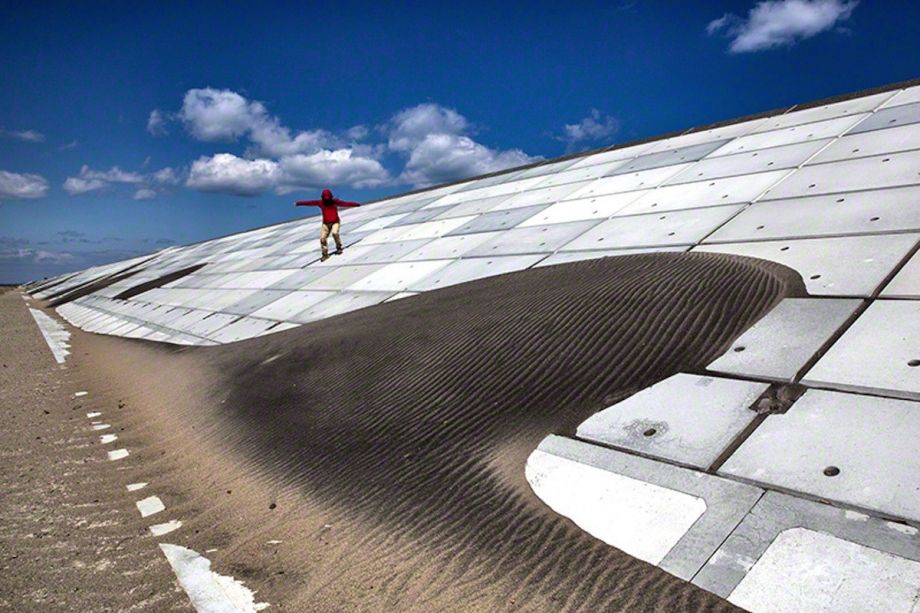 A woman makes her way down the seawall along the Kitakama and Ainokama coastline in Sendai, Japan. After the tsunami in 2011, the Japanese government has spent billions of yen on the reconstruction the seawall. (Photo by Paula Bronstein)

One of the most famous images of Superstorm Sandy, Steven Wilkes’ aerial photograph of the Jet Star Roller Coaster wading without permission into the Atlantic, is most obviously a journalistic record of an historical event. It is also art. It is also a warning.

Wilkes’ image, among many others in “Sink or Swim: Designing for a Sea Change,” a photo exhibition about sea-level rise and the fate of cities at the Annenberg Space for Photograph in Los Angeles, remind us that the disaster has already arrived. As the decades go on, the wind will not be blowing the roller coaster out to sea. The sea will be meeting the roller coaster — or the neighborhood, or the downtown or the nuclear power plant — right where it is.

With roughly 650 million people living less than 10 meters above the high-tide mark, it will also be meeting many of the world’s largest cities.

“Sink or Swim” displays the guiltiest sort of beauty: nighttime cityscapes, punctuated with dazzling points of light. Muscular engineering of the most inventive sort. Primitively endearing structures wrought by hand. Waters so brilliantly blue that they surpass anything that passes unaided from nature to the eye.

And yet, these are photographs — all large, all in color — of destruction, displacement and unease. Streets are flooded. Residents are upheaved. Cities in the developed world are nearly destroyed while cities in the developing world recede slowly. Some cities look nearly uninhabitable on even their best days. Never mind those when typhoons, tsunamis or high tides arrive.

“Sink or Swim” deliberately concerns sea-level rise and not climate change as a whole. But, to the extent that the exhibition is about climate change, it feels like old news. We’ve seen that movie before. Which begs the question, what is special about photographs? What can they tell us that we don’t already know — or haven’t willfully denied? 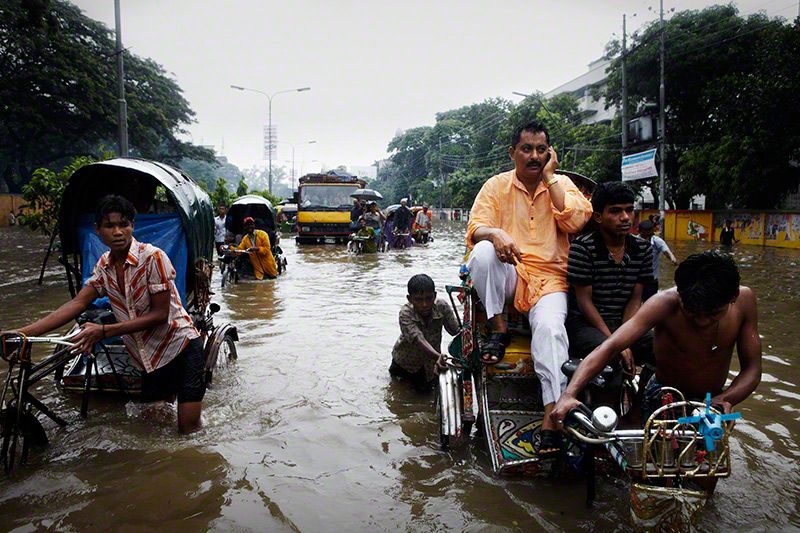 Arambagh, Dhaka, Bangladesh, 2009 — After a night of heavy rain, Dhaka experienced widespread flooding around the city. (Photo by Jonas Bendiksen) All photos can be seen at the “Sink or Swim: Designing for a Sea Change,” exhibition at the Annenberg Space for Photography in Los Angeles until May 3, 2015.

Climate change and natural disasters are constantly current events. The immediacy of photography means capturing the ongoing crisis moment by moment. Those crises include Sandy, the Japanese tsunami and, of course, Hurricane Katrina. They also include everyday life in low-lying places like Dhaka and Amsterdam. The exhibition’s images include broad cityscapes, flattering architectural works and anguished close-ups.

Photographs can also bring the world together in one place. Dhaka, Bangladesh and New York City are not usually in the same exhibition, or even the same universe. Except, they’re connected by the same ocean. In “Sink or Swim,” they appear on adjacent walls, with equal attention to the Netherlands and Japan as to Benin and Bangladesh.

The exhibition’s other major contrast is between destruction and solutions.

The heroes of this upcoming fight — or, more cynically, the perverse beneficiaries — are engineers, urban planners, landscape architects and architects. Their responses are inspiring. They have built sculpted sea walls in The Hague. Floating schools in Bangladesh. Impressive floodgates guard New Orleans; Katrina Cottages are cute as can be, hovering six feet aboveground. Lagoons in Malibu are meticulously restored to a healthy, tide-battling state. These efforts focus on resilience: They do not restore the planet, but they may ensure that life will go on.

“The show is about architecture and thereby it’s about ingenuity,” says Anderton. “Ingenuity can take the grassroots vernacular form, and it can take the highly resourced, highly developed form of sophisticated infrastructure.”

The images are inspiring. What we don’t know — from the photographs, at least — is whether they will actually work. This is, indeed, a funny sort of design. We won’t know if it works until it fails.

Anderton is locally renowned in Los Angeles for hosting KCRW public radio’s “Design & Architecture” show, so perhaps she may be wont to idealize our ability to alter the environment for the better. There’s plenty of evidence that she’s right. But the show misses two crucial elements: politics and capacity.

It’s worth noting that the show venue, the Annenberg Space for Photography, is in the L.A. office district of Century City. The classic edge city, Century City could not function without personal automobiles. Its office towers are accompanied by thousands of parking spaces. It is exactly the kind of place that has contributed to greenhouse gas emissions.

“Sink or Swim” disregards the fake “debate” about climate change with its focus on solutions. “We didn’t make this part of a partisan political fight. We didn’t even go there,” says Anderton.

And even if all the president’s men were dedicated to resilience, where would capacity come from? The photographs prove that humans can be ingenious. Anderton notes that “there has to be a collective and comprehensive approach that takes into account the forces of nature and … create this combination of soft and hard defenses.” But how many ingenious humans does this project need? And who will bring them together?

It’s ultimately up to state and local governments to muster the political will, and the funding, to support resiliency. Even with it, there’s no telling whether there’s even enough designers. A handful of demonstration projects will not save the world. Florida alone has 1,350 miles of coastline.

As the seas rise, humanity faces limitless possibilities, but no promises. That may be the inadvertent message embedded in the glib, but ominous title, “Sink or Swim.”

“Sink or Swim” is at the Annenberg Space for Photography in Los Angeles until May 3, 2015. Admission is free. “Sink or Swim” will move to the Long Beach (Calif.) Aquarium in June.