SimCity for the Second City – Next City

SimCity for the Second City 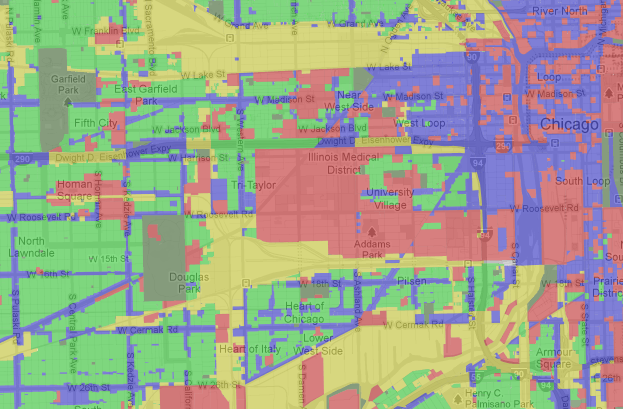 Juan-Pablo Velez is a freelance data journalist and member of Open City, a civic tech collective.

Under Mayor Rahm Emanuel, the City of Chicago is embracing open data to fuel civic innovation — the idea that if governments liberate their data on transit, crime, buildings and the like, technologists will build useful things with it. New York, Philadelphia, San Francisco and many other cities have jumped on the bandwagon.

This open data push has sparked the creation of dozens of civic apps, and the growth of a vibrant civic hacking community.

Chicago’s civic apps have a strongly urbanist flavor. Many try to visualize – and explain – how the city works.

Open City, a civic tech collective I’m a part of, has built tools that show who’s lobbying city hall, whether the city has plowed your snow-covered street and how the city’s economy is doing.

A quick refresher: A property’s zoning controls how dense its buildings can be, and what can go inside them. In other words, zoning is the built environment’s DNA. It defines the architectural and economic character of your city’s streets. And it’s all encoded in the forbidding legal tome known as your municipality’s zoning ordinance.

Reading one of these is an exercise in self-torture, and a huge pain point for anyone who builds cities: The entrepreneur looking for a place to put her business, the real estate developer figuring out what he can build on a property, the urban planner nudging the neighborhood to be more walkable.

In essence, the map allows residents to answer the question, “what can I build on this property?” Punch in an address to discover how a building is zoned, and see a human-readable description (written by us!) of what that actually means. (For instance, I live in an “RT-4” district, which typically features “two-flats, townhouses, low-density apartment buildings, single-family homes.”)

On top of the map, we’ve also distilled much of the zoning ordinance into a beginner-friendly cheat sheet, so residents can dig into the particulars of their property’s land use and density rules.

These rules are what actually limit how dense a building can be and what you can do with it. We’ve done our best to cut through the legalese and explain how they work. Ever wondered what a building’s FAR is? Enlightenment awaits.

By the way, the app’s homage to SimCity is critical to making zoning digestible to humans — for many, the video game is the only cultural touchstone people have for zoning.

Besides looking up a specific property, you can also use the app to explore Chicago’s zoning patterns and learn why the city’s urban landscape looks the way it does. That drive-through bank slicing through the walkable storefronts? The alderman carved out a tiny zoning district for that property. That industrial corridor butting up against downtown lofts and boutiques? There’s a planned manufacturing district keeping it around. That sudden drop-off in high-rise apartments? Anti-development NIMBYs downzoned the adjacent block.

Why has nobody done this before? Because this is the first time the City of Chicago has publicly released the city’s zoning map in digital form.

The code powers Second City Zoning is open source, and other cities are starting to open up their zoning data, so you’re free (and encouraged!) to redeploy our app in your city. Have fun wading through your hood’s zoning laws!