Signs of a Less Dirty, Life-Sustaining Future for the Gowanus Canal – Next City

Signs of a Less Dirty, Life-Sustaining Future for the Gowanus Canal 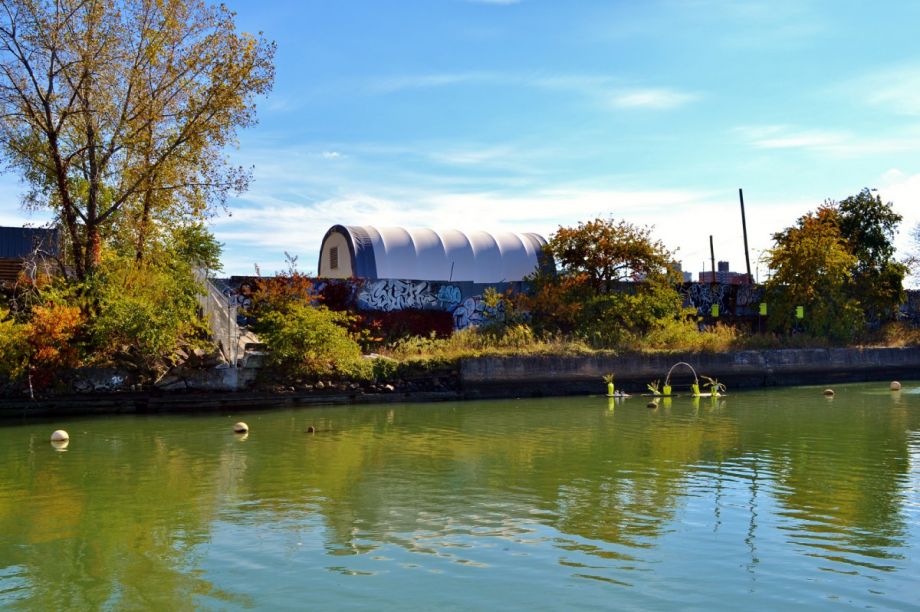 It’s among the most notoriously filthy urban waterways in the country, a repository for generations’ worth of toxic chemicals, coal tar and plain old human feces. New York City’s 1.8-mile Gowanus Canal was declared a Superfund site in 2010, but the cleanup is still in the planning stages and has yet to begin in earnest.

Despite the recent reactivation of a flushing tunnel that brings in fresh water from the East River, the sickly green canal emptying into New York Harbor still gives off a nauseating stench of petroleum fumes and sewage. Scientists sampling the water here have even found gonorrhea in the murky water.

When Hurricane Sandy hit, the canal — once a pristine wetland and fishing ground for the native Lenape tribe — overflowed its banks, leaving an unknown residue in the streets and in people’s basements when it receded. A dolphin died here last year, piteously comforted by a lone onlooker who climbed down a ladder to reach out and touch it in its final minutes.

Yet for years now, the Gowanus, which divides two booming residential sections of Brooklyn, has captured the imaginations of people who live and work nearby. There’s even a canoe club that regularly sets out to paddle on the water.

Landscape architects have designed a “sponge park” that would absorb and filter the stormwater runoff that regularly floods the area, and already some bioswales and other green infrastructure elements have been built in the surrounding streets. The Proteus Gowanus gallery, in an old industrial building on the canal’s banks, is home to a museum of artifacts documenting the canal’s history. Developers plan to build a massive condo apartment complex along its shores, promoting the area as waterfront. And a massive Whole Foods store, selling artisanal Brooklyn everything, just opened next to the Third Street Bridge.

The Gowanus, in spite of or perhaps because of all its nauseating, life-threatening faults, is a particularly well-loved industrial dreamscape. Last weekend, the canal neighborhood hosted what was probably its first conference dedicated to the waterway and its environs, TEDx Gowanus, featuring speakers on topics such as the region’s Native American history and the potential for gardening with blue mussels.

The most remarkable part of the event was a scheduled live dive into the Gowanus itself, transmitted to the audience in HD by the intrepid Coney Island River Rats. These guys are commercial divers who spend their workdays under the waters of New York Harbor, inspecting underwater structures, retrieving stunt people and doing anything else that’s called for. Even for them, the Gowanus was a challenge.

The live dive didn’t happen, however, because the temperature was low enough to potentially freeze up the breathing apparatus on the hazmat dive suit donned by diver John D’Aquino to protect him from the elements. But in a charming video of River Rat Lenny Speregen speaking at the TedX conference, you can see taped footage of a test dive conducted one day earlier.

What does D’Aquino capture with his helmet-mounted camera down there? Well, a lot of unidentified gunk floating around in the water, for one thing, and it doesn’t really bear thinking about what exactly that is. But he also sees some old wooden pilings that showed evidence of recent feeding activity by marine borers — normally a harbor scourge, but a welcome sign of life in this context. Perhaps even more amazingly, his camera shows us tiny young oysters, the spawn of restoration efforts farther out in the harbor.

They are just white spots in the video, you can barely make them out. But they’re a sign of hope that some day, the Gowanus could become more than a punch line for a tired joke about dirty New York water.

“This is an amazing critter, that it can survive there,” Speregen says of the minute signs of life on screen. “I want to give him a medal.”