SideCar Scuffle: Why You Couldn’t Ride Share During SXSW – Next City

SideCar Scuffle: Why You Couldn’t Ride Share During SXSW 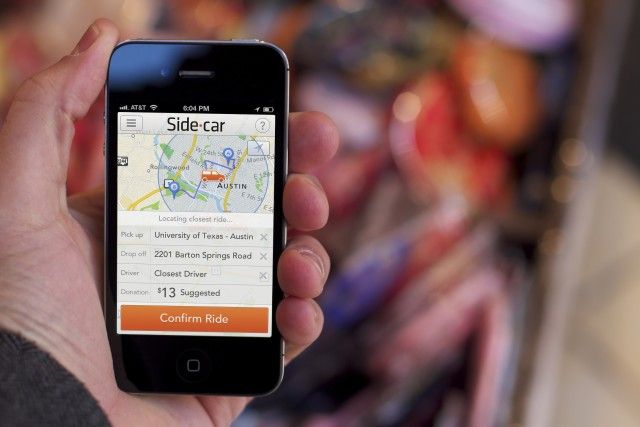 Austin drivers who use services like SideCar can now find their cars impounded on the spot.

As the throngs descended on Austin, Texas last week for the South by Southwest music festival, they traveled from hotel to party to party in nearly every mode of transportation known to the modern city. They went on foot, train, bus and car; they cruised around on loaner bikes or rolled around in pedicabs, including one pulled by a driver in spandex tights, a cape and a Mexican wrestling mask. (Keep Austin weird.)

But there was one transportation mode they didn’t take, at least not legally: IT-enabled ridesharing. Thanks to a city council ordinance hastily passed earlier this month, Austin drivers who use social transportation sites to connect with paying riders can now find their cars impounded on the spot.

The ordinance marked an escalation of a spat between Austin policymakers and the social transportation company SideCar over whether its users illegally provide unlicensed ground transportation for “compensation.” (SideCar answered the ordinance by filing suit in federal district court, seeking to prevent the ordinance from being enforced against its users.) With its passage, Austin became the latest in a string of local governments to enforce regulations designed for traditional taxis against drivers using social transportation sites. The crackdowns have a certain Big-Brother aroma about them, particularly made-to-go-viral incidents like Philadelphia using a sting operation to impound three drivers’ cars last month.

Do the scuffles represent plain old bureaucratic resistance to innovation, or does social transportation present bona fide public policy issues to be sorted out?

To Rich MacKinnon, chair of Austin’s Urban Transportation Commission, a citizen advisory board appointed by City Council, the “David and Goliath” narrative misses the challenges that companies like SideCar pose to Austin’s transportation mix. “It’s a great story, but it’s not the story in Austin,” he said. “We want to find a way for social transportation to work.”

So what is social transportation, anyway? In its idealized form, companies like SideCar, Uber, Lyft or Tickengo offer nothing more than a new tool in the sharing economy, a way to connect drivers with neighbors who need a lift. Although the details differ from company to company, the basic setup is that individuals register as drivers in the system, a process that may include some safety features like background checks or proof of insurance.

On the passenger side, potential riders register and plug in a credit card. Both drivers and riders can check out each other’s profiles and ratings from past trips before hitting the road — a system SideCar CEO Sunil Paul compares to Match.com. Payment is not a set fare but a negotiated “donation,” although again, each app works a little differently. At Tickengo, the passenger offers how much she is willing to pay when she posts her need for a ride; with SideCar there’s no discussion of money until the end of the trip, when the app suggests a price (er… donation) based on how much other riders have paid for similar trips. A fee for use of the app is charged on top.

To its supporters, social transportation is just plain old carpooling, made easier and more convenient with IT. To Paul of SideCar, it’s also a way to move transportation in a more sustainable direction while accepting that the internal combustion engine isn’t going away.

To city governments, however, summoning a stranger to pick you up and drive you to your destination, at which point you pay with a credit card, doesn’t sound like the neighborhood soccer-mom carpool. It sounds like an unlicensed taxi service.

In most cities, taxis are heavily regulated to deal with the fact that getting in a car with a stranger involves, well, some pretty obvious risks. It is also a competitive industry where licensed drivers — independent contractors whose incomes depend on the fare miles they tick off each day — fiercely resist adding new vehicles to the road. Frankly, it would seem unfair if social transportation were to be used as a work-around to licensing requirements, allowing de facto professional drivers to avoid the regulatory rigmarole that other professional drivers have to go through, for little reason other than their vehicles aren’t yellow. However, one thing that both Austin policymakers and social transportation services agree on is that whatever role social transportation will fill in Austin, the point is not to push traditional taxis off the road.

“Are we picturing an army of cab drivers available through smart phones that would displace the taxi industry as we know it? If so, that would raise a whole set of questions,” said Austin City Councilmember Chris Riley. Those questions, he said, would be the same ones the city asks in its conventional taxi licensing process — background checks, insurance, vehicle inspections and so on. “Pretty soon you have something that looks like what our taxicab company regulation looks like,” Riley said. “I don’t think that’s the vision of social transportation we’re aiming for.”

According to Paul, that’s not SideCar’s vision either. The company includes in its terms of service that it cannot be used for commercial purposes, which is defined in terms of a cap on profit. However, Paul said that SideCar does not track drivers’ expenses, which means the system cannot actually police this requirement. Again, though, models vary. According to Tickengo CEO Geoff Mathieux, his service keeps commercial drivers out by simply capping the revenue that its drivers can receive, regardless of their precise expenses. Once drivers hit the cap, they can no longer receive ride requests for the year.

Given the seeming agreement that social transportation is aiming to be the taxi of the future, can cities find a regulatory middle ground somewhere between cabbie and soccer mom? “I think the answer is literally, ‘how much, how often,’” said MacKinnon of the Urban Transportation Commission. Austin followed its impoundment ordinance with a new initiative to study social transportation in other cities and propose a regulatory system that recognizes social transportation’s niche. This appears to be a common trend: In California, for example, the Public Utilities Commission is also studying the market with an eye to possible future rulemaking.

Ultimately, the disagreement boils down to whether social transportation needs its own subgenre of regulation, or whether the safety features built into the apps are enough on their own. For his part, Paul maintains that SideCar needs no special regulatory approach. Instead, he said, it should be no different from carpooling — fully subject to “the same kind of basics that make sure that carpooling is done in a safe and legal fashion.”