Sick of Being Shot At, Detroit Bus Drivers Protest for Police Protection – Next City

Sick of Being Shot At, Detroit Bus Drivers Protest for Police Protection 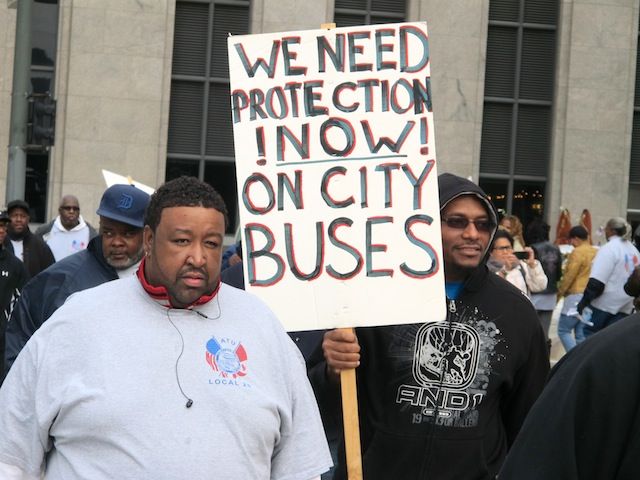 Protesters in front of the Coleman A. Young Municipal Center. Credit: Bill Bradley

Edno Casey was driving his route on Detroit’s west side when an angry driver pulled in front of his bus, parked his car and pulled a gun. The 56-year-old Casey, then working an overtime shift, took off. The man fired his weapon, shattering the bus’ passenger windows. It was only 2:30pm on Sunday.

Casey’s run-in with a gun-toting driver was not the first time a Detroit Department of Transportation (DDOT) operator has been threatened, spit on, assaulted or shot at. It happens so frequently, in fact, that about 150 drivers and members of the Amalgamated Transit Union Local 26 protested for police protection Monday morning in front the Coleman A. Young Municipal Center downtown.

Bus service was shut down across the city in what local media characterized as a “sick out” — the drivers reportedly called in sick, though union president Fred Westbrook denies this. He did, however, ask members who had Monday off or could get a vacation day to join the demonstration. “This is not a shutdown from the union,” he said. “The city put out Friday that the drivers are calling in sick and there would be no bus service.” 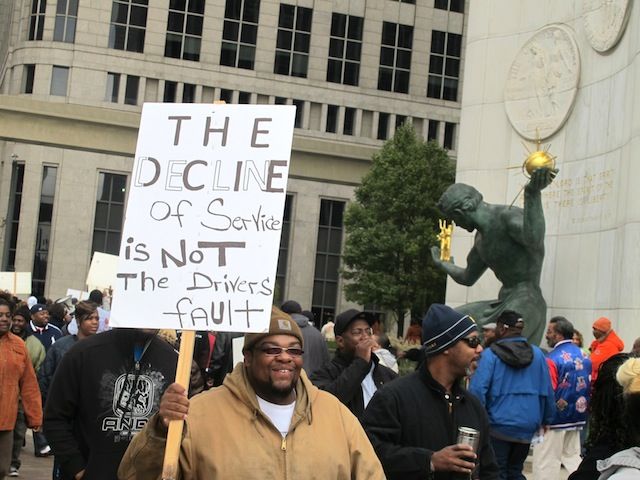 Driver harassment is nothing new in the Motor City. Speregon Evans, who has been driving DDOT busses for 24 years, was assaulted three weeks ago when he asked a young couple drinking on the bus to pour out their beers. Evans drove the bus to the police station, where the police — you can’t make this up — asked him if he could drive the two back afterward. Officers ended up arresting the man because he had a warrant out.

Eleven-year veteran Leandre Oden said he’s been in at least eight or nine fights since he started. Four months ago, a passenger who did not have money for a transfer began cussing him out. Oden called dispatch, which set the passenger off. “He came up to me and told me to get the fuck off the phone. He had his hand in his bag like he had a gun,” Oden said. “So everybody jumped up — like roaches, you turn a light on, they just jumped up. The guy told me to get the fuck off the phone. So I did. Right now, he’s the man in charge. He’s got a gun on me.”

Oden and the passengers escaped unscathed. Like Casey’s encounter, it happened in the middle of the day. These incidents highlight the dangers that DDOT drivers, who earn a base salary of $32,000, face every day. And while two drivers were stabbed last weekend, the daily job risk isn’t limited to the recent uptick in reported assaults. It’s been going on for years.

Abigail Bunch told me she was sexually assaulted by a passenger on her bus 10 years ago. “I was able to get off the bus, and I thank god for Eastland security,” she said. “Because if it wasn’t for them, he probably would have tried to kill me.”

Westbrook and his members marched for police protection in September to no avail. Reporters asked if Monday’s protest would have any measurable impact.

“It’s made an impact already,” Westbrook shot back. “Gary Brown [COO for Detroit Emergency Manager Kevyn Orr] and Chief [James] Craig are meeting with me at 2pm to talk about some solutions.”

Exactly what those solutions are remains to be seen. In the 1980s and early ’90s, Detroit buses had undercover cops. Brown said the city is addressing the safety issue using $3 million of $60 million the city received in U.S. Transportation Department funds. Starting next month, each bus will have eight cameras, according to the Detroit Free Press.

But if a man can shoot a gun in the middle of West Grand Boulevard at 2:30pm, what good will cameras do? They will certainly deter some crime, but a stronger police presence would be more effective.

This is just more evidence that Detroit’s newly formed Regional Transit Authority can’t get its wheels spinning soon enough. A central vision will not only help create frequent and better bussing for city residents, but could also bring in private investment or find more grant money to increase safety for drivers.

DDOT drivers who protested today will be back at work tomorrow, Westbrook said, where they will face the same dangers Detroit’s public transit operators have faced for decades. Meanwhile, many of the estimated 7,200 high school students who take transit to school missed classes on Monday. Abraham Sohn, an assistant principal at Osborn High School on the northeast side, said the school had about 60 percent attendance yesterday.

Some public officials have chalked up the sick out to last week’s rejection of a labor contract, which included a pay freeze and reduced health care. But Westbrook was having none of that.

“Contract has nothing to do with it,” he said. “I’m worried about my members coming to work, being jumped on, being shot, [having] urine thrown on them — that’s what we’re worried about, because nobody seems to care. Nobody seems to say anything about it but us.”