From Sea to Vacant Lot: A Shipping Container Condo Rises in Newark – Next City

From Sea to Vacant Lot: A Shipping Container Condo Rises in Newark 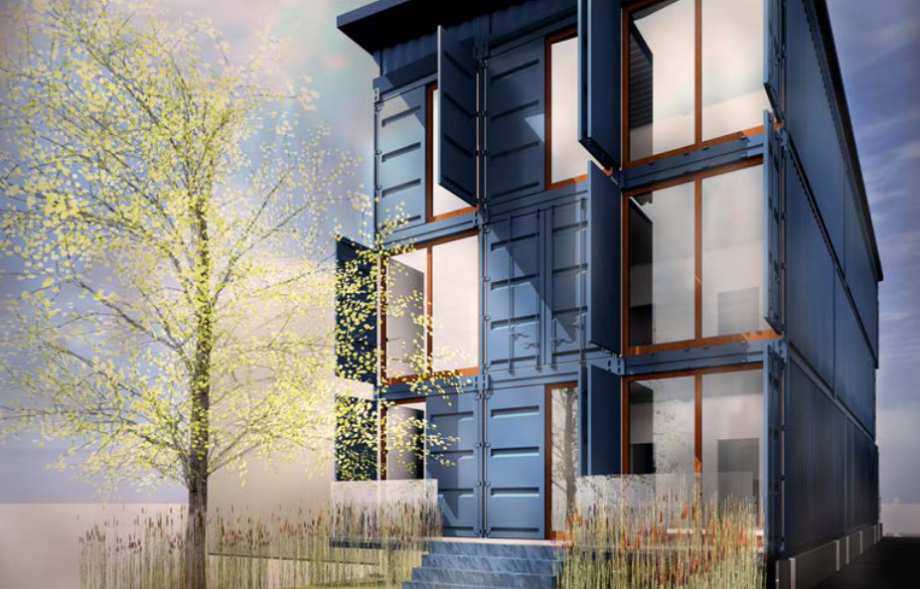 When it comes to building more affordable housing, you can get creative with financing — or you can completely rethink the single-family home.

Eschewing traditional construction materials, a team in Newark, New Jersey, is building a three-family home out of 18 shipping containers on a vacant lot, an approach that’s becoming more popular in design circles.

“Tiny living” enthusiasts have been raving about container houses for years, but the trend has just moved stateside fairly recently. So far, models have ranged from high-end (and high-priced) extravagance to off-the-grid boxes at bargain prices. Development partners Cor10 Concepts and Community Asset Preservation Corporation (CAPC) are shooting for somewhere in between; they hope that their first dwelling, built in Newark’s historic Lincoln Park neighborhood, will jumpstart other forward-thinking design projects in the stagnant housing market.

The principal of the firm designing the container dwelling, Frederick Cooke of C+C Architecture, says he steered clear of some of the offbeat architecture features coming out of Europe: “It’s a little different here. As Americans, our living standards are different. One of the challenges we’ve faced in doing this has been creating a very typical floor plan for a traditional urban three-bedroom apartment and figure out how to make the containers work with that.”

The current floor plan of each apartment includes an open living room, dining room and kitchen space; three bedrooms and two bathrooms (including a master suite); and laundry in each unit. The floors will be made out of poured concrete; closed cell foam insulation will exceed current standards. Other sustainability measures include the structure’s base, which will be built on pile footings to allow for better rainwater absorption and an option for residents to install solar panels in the future.

Cooke says the firm started looking at repurposing shipping containers a few years back when they were re-designing their own Newark office. They weren’t able to pull the financing together in time, but have been exploring the idea of using containers for affordable housing ever since.

“The neighborhood has not seen a lot of for-sale housing in a number of years since the real estate crash,” says Jeff Crum of CAPC. The organization acquires vacant lots and abandoned properties with the aim of stabilizing communities like Lincoln Park. “We’re trying to reinvigorate the neighborhood and create homeownership opportunities.”

“The problem with Newark isn’t that housing isn’t affordable, but the majority of it was created between 1880 and the 1930s and hasn’t been maintained for 40 years,” says Cooke. His firm also does these types of rehabs of older homes, but says that this is the “coolest” project in the two- to three-bedroom housing space that he’s helped to design. He’s hoping the building will be on the ground in two months and on the market by September.

The containers would be sourced locally, from the Port of Newark. “There are probably tens of thousands of empty containers around here, stacked everywhere,” says Cooke. He estimates the cost of a “one-trip” container to be around $2,000 — ones that have already made multiple ocean voyages may have already begun to rust.

Since the announcement of the Lincoln Park project, several interested groups have contacted C+C Architecture about exploring the possibility of shipping container facilities, including local community gardeners and a prison reentry organization.

The project would be one of a only a handful of shipping container homes in the Northeast. Two buildings have recently gone up in Williamsburg, Brooklyn and an apartment complex opened in Washington, D.C., last fall.

Crum says that he is hoping the design features will attract buyers from the creative class to Lincoln Park with the innovative design. “We think we’re pushing the envelope a little but with what we’re doing here, really trying to attract artists and people who might think about living in an urban environment as a cool and creative thing to do.”