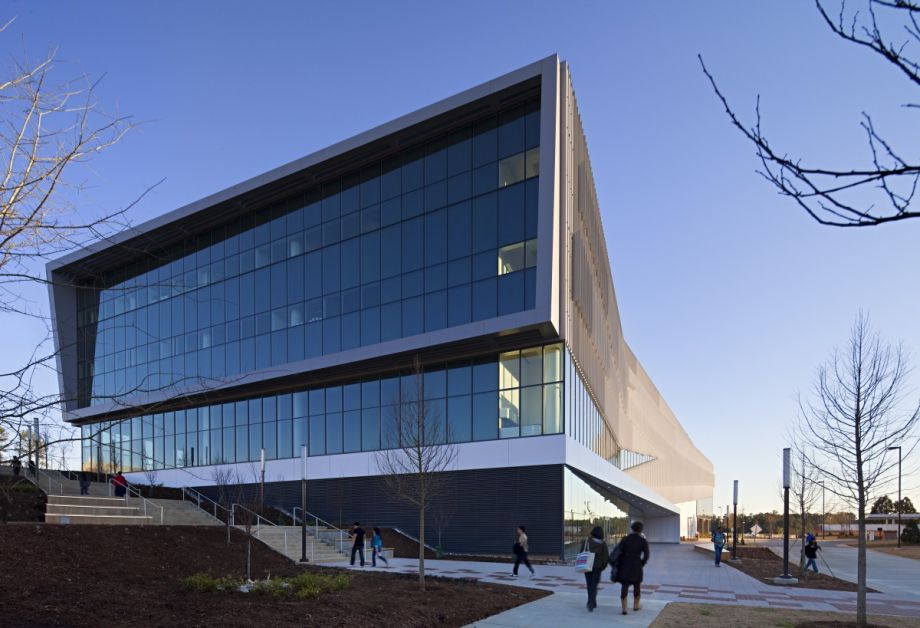 The Snøhetta-designed James B. Hunt Jr. Library on North Carolina State University’s Raleigh campus opened in January to critical acclaim. It took five years and more than $100 million to build the 221,000 square feet library and its parking deck.

The Norwegian architecture firm Snøhetta has designed some of the most notable buildings and public spaces in the world over the last 15 years. The new Oslo Opera House. Egypt’s Bibliotheca Alexandrina. A reconfigured Times Square in New York, and a massive expansion of the San Francisco Museum of Modern Art.

Next up? Temple University’s library, on a still-gritty stretch of Broad Street between Montgomery and Norris in North Philadelphia. Snøhetta director and co-founder Craig Dykers is delivering a lecture on campus next week, sharing some of his firm’s work with Temple students and a general audience of designers, architects and urbanists.

Dykers might shed some light on Snøhetta’s early stage thinking for the library project, but design work has not yet begun, so don’t expect any renderings.

Even so, Dykers is likely to address a full house. The Oslo-based firm, which was featured in a glowing 5,400-word New Yorker profile in January, is very much in vogue. Plenty of its work is as iconic as it comes, which is pretty much a prerequisite in this starchitect age. But Snøhetta is more focused on engagement than the wow factor, which would seem to make the firm a fitting addition to Philadelphia’s evolving architectural scene.

Long regarded as a fusty, conservative city in terms of architecture, Philadelphia has slowly but surely been shedding that identity, emerging as a place where serious and innovative architecture is increasingly welcome, but flash for flash’s sake is still frowned upon.

Taking a really long view, Philadelphia has of course been a national leader in design: Frank Furness and Louis Kahn, Edward Bacon and Robert Venturi, the PSFS building and the Fairmount Water Works.

But for a good 20-year stretch — after the Center City skyscraper rush ended, and before the renaissance of the past five or 10 years began — Philadelphia was in a serious architectural funk.

“We have a fantastic tradition of quality architeture and urbanism in Philadelphia, but we do go through low ebbs in that tradition,” says Harris Steinberg, the executive director of PennPraxis, the clinical arm of the University of Pennsylvania’s School of Design.

With some exceptions, the 1990s and arguably the early 2000s were architecturally uninspired years in Philadelphia. Design and planning experts had been sidelined, both culturally and politically, by political elites and business interests who built with an eye toward economic development and making a splash. Placemaking was hardly considered.

“I mean, look at the Kimmel Center,” Steinberg says. “It’s an awful piece of starchitecture that was in many ways foisted upon Philadelphia by the [Ed] Rendell administration for economic development. It’s a $275 million boondoggle that was sold as a piece of world-class architecture and it’s anything but.”

The Rafael Vinoly-designed performing arts center Steinberg says, was the nadir for Philadelphia’s design community. “I think now we’re on an upswing.”

Political change explains some of the shift. Mayor Michael Nutter has participated in both the Mayors’ Institute on City Design and the Rose Center for Public Leadership at the Urban Land Institute, and clearly values the effect good design can have on a city. With his hiring and investments, he’s made it a priority. The city Planning Commission — a wasted shadow of what it was in Bacon’s day — has grown more robust and influential.

“People, whether they’re architects from out of town or already here, they are getting a pretty strong sense that the city has higher expectations for the outcome of the physical environment. And I think they’re responding accordingly,” Greenberger says.

But it’s not just a political shift behind Philadelphia’s embrace of design, Greenberger hastens to add. The city’s design community has, quite deliberately, grown more assertive and engaged in public life, through organizations like PennPraxis and the Community Design Collaborative.

“There’s a whole new wave of architecture and new urbanism that is beginning to settle in to Philadelphia that will be looked upon in the future as an important and interesting layer of strata in the city’s design history,” Steinberg says.

Some of this is simply catch-up. Other cities were madly courting starchitects and erecting boundary-challenging buildings well before Philadelphia got around to developing the disappointing Kimmel Center.

But there simply isn’t the economic demand in Philadelphia to rebuild as rapidly as New York or other more prosperous cities do. “We move in 50-year increments here, not 10 years like some other places,” Steinberg says. The potential downside to that is stagnation and an unduly conservative design culture. The upside, Steinberg argues, “is that we get to keep a lot of old stuff because we’re not in a mad rush to tear everything down, and ultimately our new work is more thoughtfully integrated than in a lot of cities.”

And that is exactly where Snøhetta excels. “Their work is grounded in people, place, material,” Steinberg says. “They don’t just build shiny baubles.”