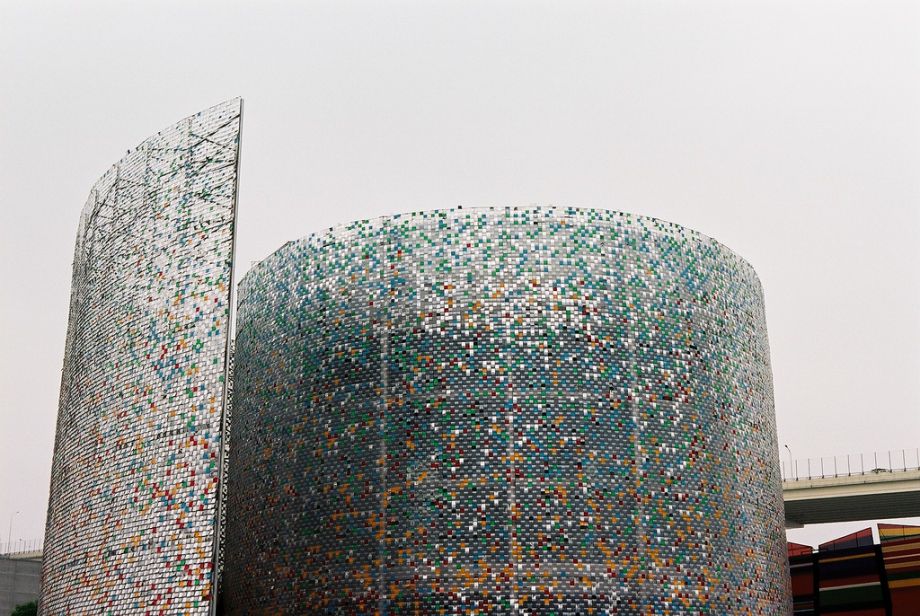 A pavilion at the World Expo in Shanghai. Eugene Regis

This is the second in Josh Leon’s series of posts about the World Expo in Shanghai. You can read the first installment here.

There has been ample criticism of the World Expo for being all flash and no substance. That is, for having dramatic architecture on the outside but little of substance on the inside. There is some truth to this. Most of the exhibits center around films, not all of them good. In fact you could refer to the Expo as in part a film festival of urban innovations. At worst, these displays are little more than PR, the shameless self-promotion of governments and businesses. That said, the sheer size of the Expo means that there are more fantastic exhibits than could possibly be taken in with one visit (or many visits). Many of the spaces in the “urban best practices” area have a lot to say about contemporary urbanism – as long as you accept that this is, perhaps appropriately, and upbeat show. Few evils of the modern city are seen or heard.

I’ve been entering through the Puxi side of the Expo grounds on the West side of the river, which is basically the rear entrance. This, in my (admittedly incomplete) estimation, showcases the best of what the Expo has to offer in terms of exhibits that speak to the theme of “better city, better life.” Nearby is the “urban footprint” pavilion, which chronicles urban innovations going back to Mesopotamia. Here digital media is used to great effect. The pavilion’s gigantic atrium is covered at all angles by cinema screens (cleverly embedded in what looks like a Hollywood set). One minute you’re walking through ancient Babylon, the next your surroundings have morphed into the Roman Forum. As history progresses you find yourself immersed in a glittering representation of midtown Manhattan, presented as a fitting apotheosis of the 21st century city. The displays highlight what’s new in cities (especially the transition toward knowledge-based societies) and what’s continuous through the ages (particularly street layouts still with us from the bronze age). This is replete with real ancient artifacts.

My favorite exhibits so far are in the “pavilion of the future,” which captures all of the Expo’s utopian flare. You enter through a long corridor of urban visions from pop culture, most recognizably Fritz Lang’s Metropolis. From there you enter an atrium which is essentially a homage to utopian urban ideals, which the exhibit presents as the underpinnings of modern urban planning. Most of the great theorists get mentioned—Thomas More, Ebenezer Howard, Frank Lloyd Wright, Charles Fourier, and so on. Le Corbusier is the star of this show. There’s even two giant sculptures depicting their great books piled from the floor through the ceiling. Conspicuously absent, from what I could tell, were proponents of organic development from
the Jane Jacobs school. The images celebrate ideals of open space and decongestion that connect the featured figures. This is fitting in a place like Shanghai, where most new development is Garden City writ large.

Follow the path further and you find kiosks extolling the need to reduce urban footprints, minimize traffic, use alternative fuels, concentrate services and build to the heavens rather than expanding outward. Like most of the rest of the Expo, none of this is controversial. The pavilion itself is an homage to industrial conversion. It was once an old power station. Aging industrial sites, the message goes, should evolve into creative, white collar infrastructure. This is part and parcel with what’s happening in Shanghai itself. This city, mainland China’s most educated, is undergoing a push to form “creative clusters” out of old buildings. This has meant tons of adaptive reuse. Move from to the next area and you get to walk through the future of cities—of course rooted in the Garden City visions of yesteryear. There’s a city in water, a green “eco city,” a space city, and something called an “intelligent city.” This last type was ambiguous, although I gather it implies a creative class on steroids, something that would very much please Richard Florida. To top it all off there is a borderline hallucinogenic cartoon on massive jumbo screen that shows a population of children riding a bright red deer through these various wonder cities.

Those are my favorites, but there are many more interesting displays. Hong Kong’s pavilion showcases the city’s “smart cards,” which store your personal information and consumer tastes, transmitting them instantly wherever needed. Widely used to monitor the whereabouts of school children, they can also aid shopping, dining and public transit. Rectangular cubes with digital video demonstrate how much more fun certain activities are with the help of smart cards. These include trying on clothes, romantic jaunts through the city, and buying raw fish (sure beats getting back physical change covered with fish guts!). Still, my inner civil-libertarian has reservations. Stay tuned because the best is yet to come. I’ll be saying a few words on Expo architecture, which is by far the biggest reason I’ve come here. And I do mean the biggest.