Sham Minority Contractors Have Been Hired in Your City, Probably – Next City

Sham Minority Contractors Have Been Hired in Your City, Probably 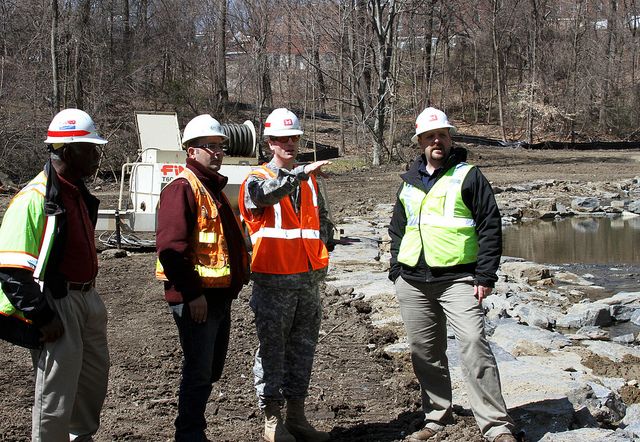 Contractors at work on an environmental restoration project in Philadelphia. Credit: U.S. Army Corps of Engineers

In New York, investigations into fraudulent hiring of minority- and women-owned subcontractors are so common that they have become something of a specialty for local prosecutors. The most recent instance was a $10 million settlement reached with Siemens Electrical.

The story is the same in Chicago, Seattle and Dallas. And that’s just in the last few years. Go back further, and it’s the rare city or state that hasn’t endured a scandal or four tied to well-intentioned minority contracting regulations.

The particulars of the rules vary from city to city and state to state, but the objective is always the same: Foster economic development in minority communities by requiring (or strongly encouraging) companies awarded public contracts to hire subcontractors owned by minorities or women.

It’s a laudable goal, as business ownership in America remains largely the domain of white men. Of the 4.65 million privately held firms in the nation with more than one paid employee, 89 percent are run by white principals and 62 percent are owned by men, according to U.S. Census data. (Women own 18 percent on their own, while another 20 percent of firms are owned jointly by men and women.)

Government contracting requirements are designed to reduce that imbalance, and they can work. The federal government’s version of the program, called the 8(a) Business Development Program, is designed to help minority-owned businesses “build their competitive and institutional know-how.”

But that’s where things can get sticky. In a large number of cases across the country, contractors have taken to using sham minority subcontractors — shell companies “owned” by minorities that don’t have the actual capacity to perform the work in question. These faux contracting operations can make it look as though real work and real cash is flowing to minority-owned businesses, when in fact the money is really being passed through.

Another version of the same scandal features politically connected minority business owners, who use their juice to ensure their companies receive a big slice of the set-aside contracts, as was the case in Philadelphia in past years.

What is it about minority contracting programs that makes them such persistent sources of fraud and corruption?

The answer depends on whom you ask. Some non-minority contractors suggest privately that the root of the problem is a genuine lack of capable minority-owned firms in their industry or city, a state of affairs that can lead less scrupulous contractors to look for shortcuts to satisfy municipal requirements.

Others suggest that affirmative action in contracting is vulnerable to fraud because all parties are eager to welcome good news. Politicians sometimes embrace stats that reflect climbing rates of minority participation in contracting, even when the firms driving those spikes are shams.

Back in Philadelphia, Kurland doesn’t accept the premise that minority contracting programs are inherently prone to corruption. Rather, she said that for a variety of reasons, they just do not get the scrutiny they need.

“These programs can be effectively policed,” Kurland said. “And the press we’re getting on this can have a huge deterrent effect.”