Lighting Design Could Bring S.F. Neighborhood Into Focus – Next City 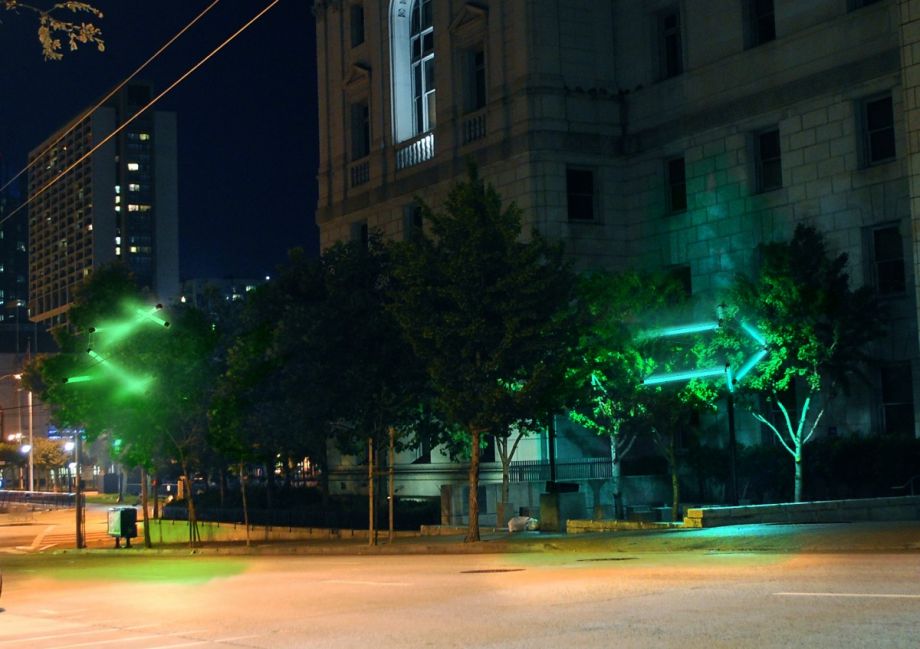 Just a few blocks separate San Francisco’s Civic Plaza from the restaurants and entertainment in Little Saigon, but as it is today, the route along Larkin Street isn’t very inviting. The stretch is pocked with blank walls and dark at night. It’s also a common gathering place for homeless men and women, and has garnered a perception of being unsafe. The space is in between and indeterminate too, part of the Tenderloin neighborhood, but with spillover businesses from Little Saigon, and newly trafficked by techies from the software companies that have relocated up the street.

In a bid to repair the severed connection, the Tenderloin Community Benefit District worked with nonprofit Our City to solicit design proposals for light-based art on Larkin Street. The winning design, a series of light installations that change color in response to sound and appear as a coherent symbol only from a certain perspective, was announced this week.

“The challenge was to try to help create a culture because [Larkin Street] doesn’t already have a particularly cohesive one, and to get people to actually spend time there, and to voluntarily traverse the corridor,” says Annie Atura, a member of winning team Synesthesia. Their original design was inspired by two primary facets of life on Larkin Street: the Tenderloin’s noisiness, and the inescapability of urban sound for people living outside. Of all the city’s neighborhoods, the Tenderloin receives some of the highest rates of noise complaints.

“I was interested in trying to transform noise from a nuisance into something productive and interesting,” says Atura. “And I was also interested in using the lighting to break down the barriers between interiors and exteriors. If you’re driving through the area or walking as quickly as possible, how can we use light to shatter the boundary, real or imagined, between you and the people outside?”

At first, Synesthesia proposed to do so by embedding sensor-connected light panels in sidewalks and walls. But in speaking to business owners and learning more about the permitting process, unintended consequences became clear. For one, the design would be difficult to permit and maintain. And many people mentioned the street’s filthiness — in particular the prevalence of human excrement. The Synesthesia team realized that if the street wasn’t also better maintained, bottom-up illumination would only make it appear in worse shape.

Some shop owners also liked the idea that sidewalk lighting would discourage people from sleeping there, but that wasn’t Atura or team member Tyler Bushnell’s intent. Bushnell says increased safety is one component of the lighting project, but the group didn’t want that to come at the expense of homeless men and women. Rather, they wanted the lights to encourage compassion, by calling attention to the noise we all live with, and to shake people out of their individual spheres, by visually registering people’s presence in response to the sounds they make passing by.

Their next design called for color-changing globe lights in trees. Then the Synesthesia team, which also includes Jason Sauers, took their design to the streets to solicit ideas from the community. This public process is fundamental to Our City’s vision, which co-founder Ray Boyle describes as “putting residents at the center of civic process and giving them the opportunity to lend their ideas and lend their local genius to local problems.” Collectively, the three finalist teams spent over 100 hours surveying people on Larkin Street, she says. Part of the criteria for selecting a winner was the degree to which the team’s design evolved in response to what they heard.

A typical RFP is like a black box, says Our City co-founder Jake Levitas: A call goes out, teams apply, a winner is chosen, and then the community-engagement process is supposed to begin. Our City engages in projects that aim to bring people typically outside of the civic process into public design. With this project, the nonprofit had its first opportunity to apply that philosophy to the RFP process, opening up that black box to public view. They asked the teams to consider Larkin Street itself the client, not the Tenderloin Community Benefit District or Our City. They encouraged teams to share information and help each other out.

Synesthesia’s proposal evolved drastically from public feedback. While asking pedestrians to identify urban sounds and match them to colors, one group mentioned wind as a prominent sound on Larkin Street. Bushnell says the team had been struggling with the wind all day, but hadn’t fully registered it until that comment. From it, an idea started to form that eventually transformed their proposal. Rather than globe lights, the team came up with a vision for a lighting structure that looked jumbled and organic from one angle and then cohered into a shape like a star or an arrow from another.

“We thought that was a really beautiful metaphor for that whole street and for the Tenderloin in general,” says Bushnell. “We want people to kind of take a second look and realize there is something to be appreciated about the area.”

The team hasn’t yet decided on final symbols, but wants to work with property owners and residents near the installation sites to agree on images with some meaning to them. Boyle and Levitas of Our City say the team’s final design really reflected their deep listening. Synesthesia will receive $2,000 to develop a final design, which will then be used to fundraise for the actual installation. No funds have yet been secured, but the winners are asked to stay within a $100,000 budget.

Beyond Larkin Street, Boyle and Levitas want to see this type of RFP applied to more aspects of public design. Engaging artists and residents in the creation of their city offers an opportunity not just to change the physical landscape, says Boyle, but also the “collaborative landscape” of cities.