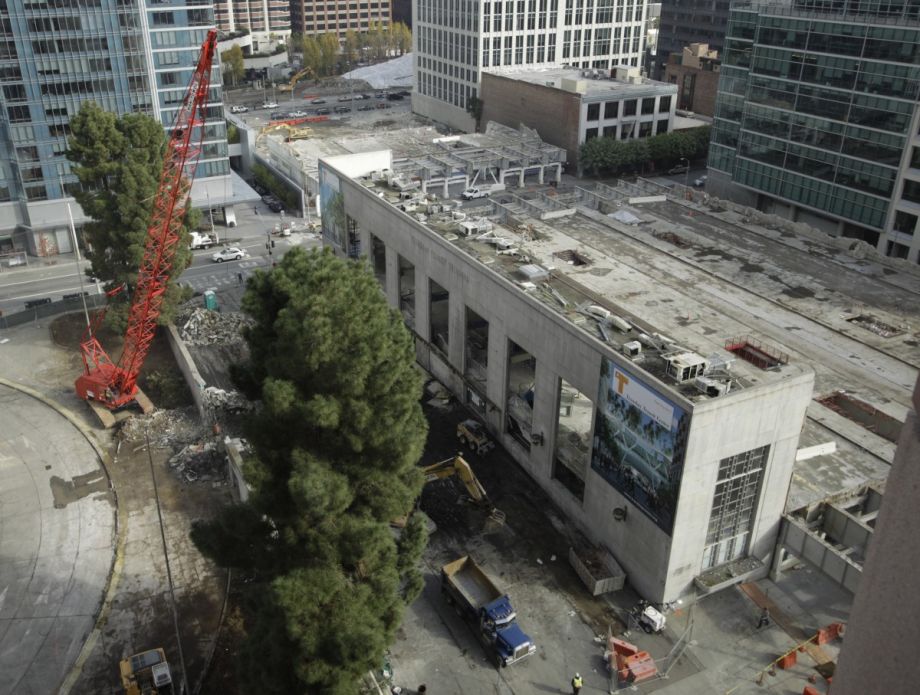 The old Transbay Terminal building in San Francisco, which has been taken down for the new Salesforce Transit Center. (AP Photo/Eric Risberg)

San Francisco has no shortage of privately managed public spaces, but the rooftop park atop the city’s new transit hub, which is set to open next spring, will be one of its larger and more spectacular ones.

The 5.4-acre park, designed by PWP Landscape Architecture, will include 12 gardens and more than 400 trees towering over plazas and meadows — all sitting atop the “Salesforce Transit Center” (named after a local tech firm that will drop $110 million in sponsorship fees over the next 25 years for the honor). Though owned by the Transbay Joint Powers Authority, programming will be managed by Biederman Redevelopment Ventures, which traces its origin to the team that revived Bryant Park in Midtown Manhattan in the 1990s, the San Francisco Chronicle reports.

That historic park reopened in 1991 after several years of renovation, and a privately managed budget that dwarfed its former public one. According to Bryant Park’s website, it is “the largest effort in the nation to apply private management backed by private funding to a public park.”

Dan Biederman of Biederman Redevelopment Ventures told the paper that, despite its private management, the San Francisco park will be “public” in terms of access.

“Everything here except buying a meal will be free,” he said, suggested that by the summer after it opens, the park will host everything from community festivals to face-painting booths and free knitting classes.

Of course, the line often blurs in privately owned or privately managed public spaces, as Next City has covered, particularly where security is concerned. Questions of how long people are allowed to linger, when lingering becomes loitering (and for whom lingering becomes loitering) and what happens with political protests are often determined by the private management companies, and can look different than if the park were truly a public amenity.

According to the Chronicle, the rules for this park will be based on those at Yerba Buena Gardens, also a public space managed by a private firm. That firm handles maintenance and security, the paper reports, which will be the same arrangement at the new park.

The Chronicle piece, written by the paper’s urban design critic, John King, notes that the paper is working on a deep-dive investigation into the “huge changes set in motion by the replacement of the old Transbay Terminal with a new facility intended to serve trains as well as buses.” The first piece will appear this Sunday here.