Severe Winter Floods In Ireland and the U.K. Could Become Commonplace – Next City

Severe Winter Floods In Ireland and the U.K. Could Become Commonplace 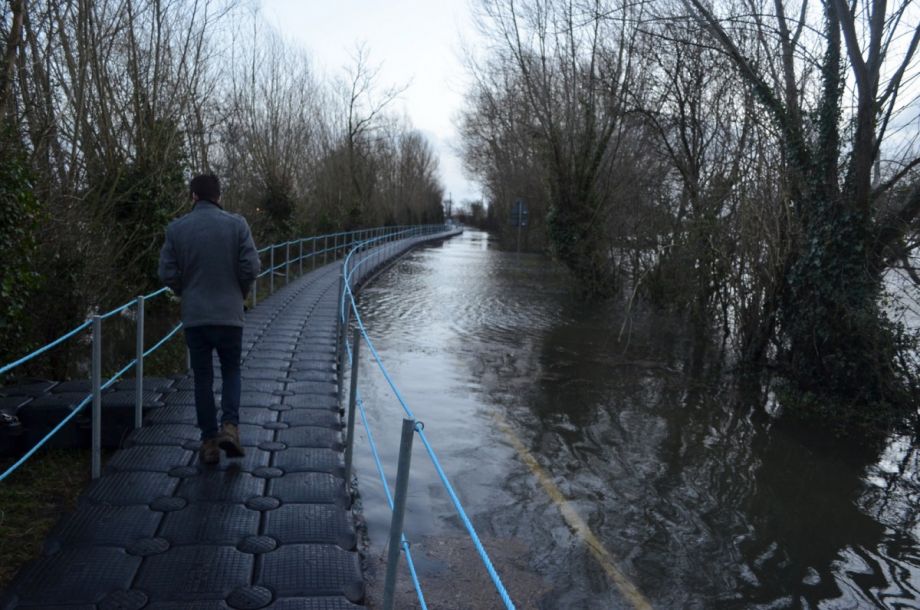 “There’s nothing like a jolly good disaster to start people doing something.”

Those were the words of Prince Charles as he visited the Somerset Levels region of southwest England this week. He reached the pastoral village of Muchelney, built on a hill by medieval monks, via boat — the only way to access this community of a few hundred residents since floodwaters essentially turned it into an island in early January. The prince toured the area by tractor, traveling through water high enough to cover the wheels. He sat in the tractor bed on a wooden bench decorated with fresh roses.

The flooding this winter was by no means an isolated incident in this part of the British Isles. Shortly after Charles made his visit, the United Kingdom’s Environmental Agency issued no fewer than nine severe flood warnings, indicating “a significant threat to life,” for coastal areas. Dozens of less dire warnings and hundreds of flood alerts were posted for communities throughout southern England.

Across the Celtic Sea, in Ireland, the city center of Cork filled up with several feet of water on February 4, and many surrounding communities were hit by high waters from rivers and streams breaking their banks. A storm surge and high winds resulted in waves as much as 30 feet high breaking over houses in the village of Glandore, on the southern coast. More heavy rain could fall this weekend.

Residents affected by the latest round of flooding in both Ireland and the U.K. expressed anger that the government has not done enough to help them.

“Fuck the OPW [Office of Public Works],” the Irish Examiner quoted one Cork business owner as saying. “They did sweet fuck all for us. We are now fighting a rearguard action and we are trying to stop the floodwaters coming up through the toilets.”

The head of the OPW, for his part, had told reporters before the floodwaters started rising that, “The idea that we can protect every acre of land in the country is a lie and a pretense that has to be struck on its head.”

The relentless flooding in Ireland and the U.K., which has cost many millions of euro and pounds in damage, is the result of a particularly brutal series of storms that have marched across the Atlantic one after another. January was the stormiest month on record since 1969, filled with torrential downpours that have filled rivers to bursting and saturated the ground. High winds and high tides have made the situation even worse.

The pattern that has produced flooding this year could become a new normal, one scientist has suggested. “With climate change ratcheting up in the background, events which have been described as one in 100-year storms, will become more like one in 20-year storms,” John Sweeney, of the climate analysis and research unit at the National University of Ireland Maynooth, told the Irish Times. Sweeney added that many current flood defenses are not adequate for the new climatological reality.

In both Ireland and the U.K., a comprehensive plan to address the recurrent floods has yet to be adopted. New flood protections for settled areas could be ruinously expensive in both nations.

In Ireland, defending 250 areas currently identified as “hot spots” for flooding would cost tens of billions of euro, according to the Irish minister for public works. In the U.K., Environmental Agency chair Lord Smith said that financial reality means governments and taxpayers will have to make difficult decisions about what to save from potential inundation.

“Rules from successive governments give the highest priority to lives and homes, and I think most people would agree that this is the right approach,” Smith said, according to the Guardian. “But this involves tricky issues of policy and priority; town or country, front rooms or farmland?”

It’s a dilemma that won’t be going away anytime soon. A video from the Irish Environmental Protection Agency discusses how flooding in the nation’s cities, including Dublin, has become commonplace. Development has taken place in floodplains. Streams and wetlands have been covered in concrete. And storms have become more frequent and heavier, in part because of warming ocean waters and increased storm surge.

The problem will likely only get worse. “Research suggests that in the future, climate change will indeed bring more intense surge events to these coastlines,” says Ray McGrath, a scientist with Met Éireann, the Irish Meteorological Service, who appears in the video.

As Prince Charles said, sometimes “a jolly good disaster” gets people’s attention. But his follow-up remark is worth noting, as well: “The tragedy is that nothing happened for so long.”