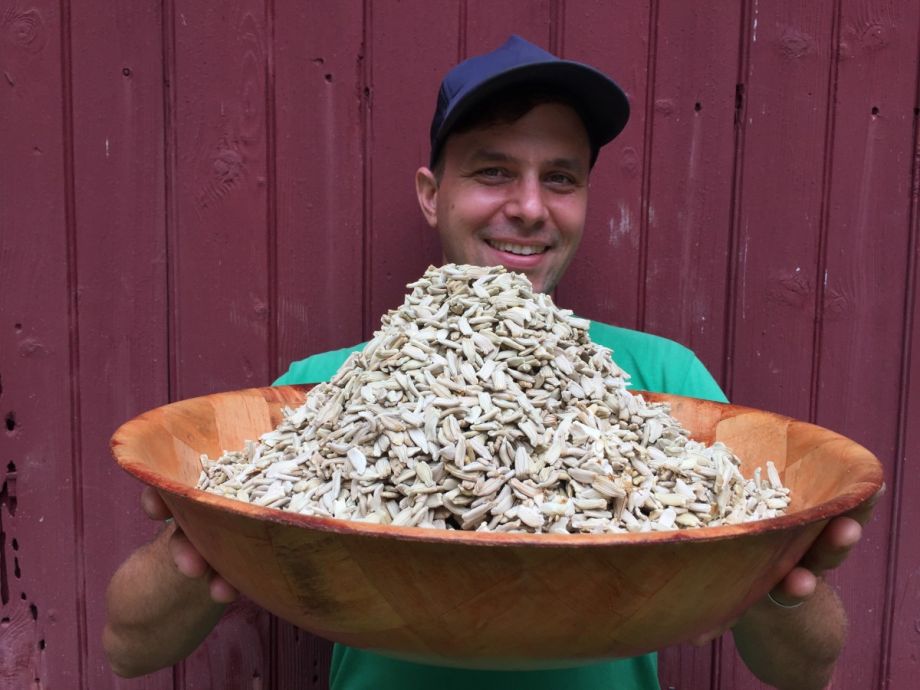 This adage was shared with Owen Taylor, founder of TrueLove Seeds, by his Bronx mentor, and it informs his seed keeping ideology.

The global population is estimated to reach 9 billion people by 2050. According to the USDA, plant breeders are necessary figures in maintaining crop diversity to be able to feed a burgeoning population, but crops are facing increased stress from climate change and a finite amount of arable soil. Climate-smart crops will be necessary to adapt along with the rising temperatures and increasing droughts, and according to the Yale School of the Environment, seed saving may hold the key to global food security.

“People being able to not just grow your own food, but save your own seed, makes us much more secure in face of the pandemic, and changing climate,” says Taylor.

We’re having a trial run with COVID-19, says Taylor. It’s happening simultaneously with climate change — a global phenomenon that’s impacting our systems related to food and seed access, and our food system is growing increasingly insecure. Climate change leads to more erratic weather patterns, unpredictable frosts and droughts. Cultivating bio-regionally adapted seeds that have learned to thrive in their current soil and ecosystem, and are able to pass that information on to future generations of seeds, is necessary for food system resilience, he argues.

The majority of seeds we see in a garden store today are likely owned by a global company, treated with fungicides and insecticides, and even genetically modified. These seeds haven’t learned from their environment, and likely need pesticides to grow. Bio-regionally adapted seeds, on the other hand, have learned from their region, soil and climate over time, reducing the need for pesticides and other crutches, and making them more resilient to a changing climate.

Seeds have taken a front seat in the global sustainability conversation, and the Global Crop Diversity Trust, established in 2004 to safeguard crop diversity, has spearheaded an international effort between nations to pay for conservation of seeds. To date the trust has received over $440 million in pledges from donors ranging from civil society foundations, the private sector, farmer’s organizations and governments from developing and developed countries.

Saving seeds is one of the most human activities, says Taylor. 10,000 years ago or so, humans started farming, and a necessary part of that was saving seeds. Until recently, seed saving wouldn’t have been considered “an endeavor,” he says. It would have been the obvious thing to do. Seed companies are a relatively new concept.

“What has made us who we are is this act of seed saving,” says Taylor. “It’s such an intimate relationship with the plants that nourish us.”

Recently, Taylor’s team has been working to adapt the aji amarillo pepper, a pungent, orange chili from Central and South America. He has successfully been able to get the plants to fruit by carefully selecting and saving their seeds over the years. Some other crops from warmer climates that Taylor is trying to adapt include Papalo seeds from a piquant Mexican herb and the fluted gourd-like Nigerian ugu.

“As populations and tastes change in our region, people are always trying to find their tastes from home,” says Taylor.

Adapting seeds is a trial and error process, says Taylor. Some thrive and some don’t. The ones that thrive are the ones you save you seeds from.

Hardly anything we eat today is native to this area, with the exception of some Lenape bean, corn and squash varieties, he points out.

“Almost anything else you can think of, wasn’t here 500 to 600 years ago,” he says. “If we look at our dinner plate now, a lot of that is made possible by adaptation.”

The process of regionally adapting and acclimating a seed is rather quick. In the Native community, people tend to think in terms of seven generations, says Rowen White, seed keeper and farmer from the Mohawk community of Akwesasne and founder of Sierra Seeds, an organic seed stewardship organization focusing on local seeds and education, based in Nevada City, CA.

It’s not just home gardeners and big agribusinesses using commercial, rather than locally adapted, seeds. Even local farmers often get their seeds from larger seed companies. But they shouldn’t — seeds are not a “one-size-fits-all,” says White. In the arid West, where growers are under increasing drought pressure and higher temperatures due to climate change, generic seeds from big companies are not going to have the knowledge of how to thrive in these climates, she says.

And those memories are very vast, she says. They include memories of past seasons and drought cycles. As a result seeds are inherently diverse with many variances. And they pass on this inherited knowledge to their seed children.

“But we have to be willing to select and save them in order to work with the plant’s gifts to us,” she says.

Part of seed keeping and selecting seeds for food security and sovereignty includes rematriation, the indigenous concept of returning something to its lands of origin, but in a living way. Unlike repatriation, in which funerary objects, ancestral remains, are returned — rematriation is the idea of bringing life and living relatives back into communities. Sierra Seeds works with universities, institutions and museums to bring home indigenous seeds from their collections.

“It’s to re-connect and revitalize those connections,” says White. “In Akwesasne cosmology these plants sprung from the body of the daughter of our original woman. The movement is really about tending and restoring relationships to these seeds.”

This is relevant to now, she says, because of the urgency of climate change.

“As humans, we’re very dependent upon our plant relatives,” she says. “Bio-regional seed keeping is part of a durable local food system, to allow us to continue to adapt to this climate chaos,” says White. “Plants are our biggest allies.”