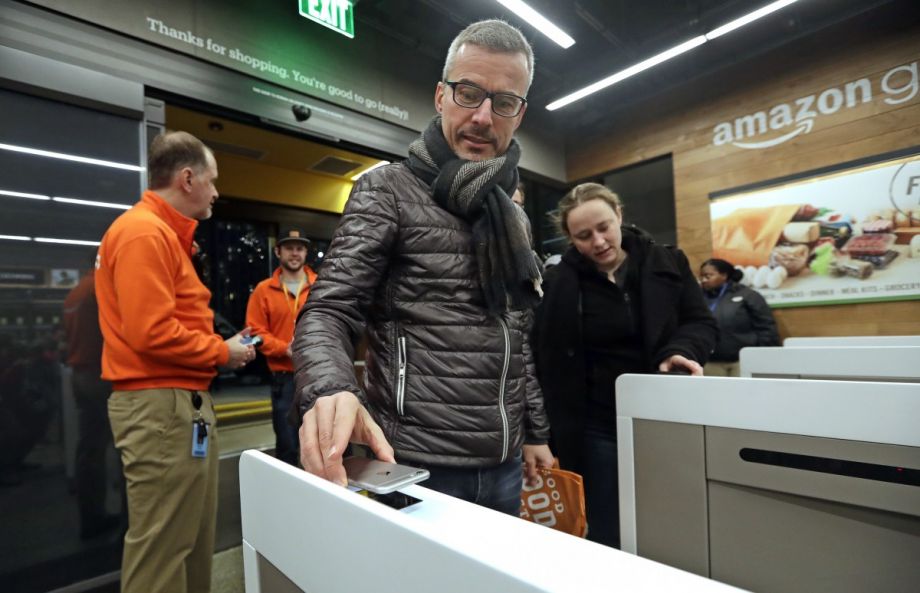 A customer scans his Amazon Go cellphone app at the entrance as he heads into an Amazon Go store in Seattle. (AP Photo/Elaine Thompson)

Amazon’s checkout-free grocery store opened to much fanfare (and a long line of curious shoppers) Monday in Seattle. Because the retail giant trademarked the phrase “No Lines. No Checkout. (No, Seriously.)” for the stores last May, those lines were a source of irony to many observers.

I’m in Seattle and there is currently a line to shop at the grocery store whose entire premise is that you won’t have to wait in line. pic.twitter.com/fWr80A0ZPV

The store allows shoppers to walk in, select their items, place them directly into grocery bags and leave — all without the help of cash registers or cashiers. Amazon has been secretive about the technology that allows this purportedly seamless process, but it’s essentially a mix of sensors, overhead cameras and machine learning. Customers scan an app upon entering, and their purchases are recorded by sensors on the shelves. Hundreds of overhead cameras “read labels through machine learning and sense the shopper’s body type,” according to NBC News. As Next City has covered, the technology began raising concerns about surveillance long before the store opened Monday, and several people took to Twitter this week with renewed unease.

Another widely reported concern: How will the business model impact the unbanked — as well as those without smart phones — and grocery store employees?

The irony of long lines is one reason to stay away. The job-killing business model is another. If we want a thriving economy, we must support grocery & #retail workers: https://t.co/FY3urjHrXJ #canlab #Amazon #AmazonGo #retailtrends

“Job-killing business model” Question: Have you shopped at AmazonGo? It’s smaller than a 7/11 and I counted at minimum 9 employees helping customers, restocking shelves, and cooking all the grab-and-go food. When’s the last time you saw 9 employees at 7/11?

According to the New York Times, roughly 3.5 million cashiers were employed in the U.S. in 2016, and their jobs could be threatened if Amazon Go’s technology spreads. For now, Amazon says it has no plans to install the tech at Whole Foods, which it purchased for $13.7 billion last August. And it maintains that it’s not actually taking jobs away, just redistributing them.

Instead of working a cash register, employees restock shelves, help customers troubleshoot technical problems and work in the kitchen preparing meals for sale in the store. An employee also sits in the wine and beer section checking shoppers’ I.D.s before they take alcohol off the shelves.

Still, it’s a definite change, and it will impact one of the country’s most common entry-level jobs. The row of empty gates (resembling a subway entrance) that greeted customers Monday appeared to some as a symbol of an economy in flux.

Looks like a giant version of the typical soul-less corporate lunchroom. #Amazongo pic.twitter.com/zvUdrT8KUm

#AmazonGo is freaking me out a little. Not about the tech directly but bringing home how so many jobs are going to change in the not so distant future.