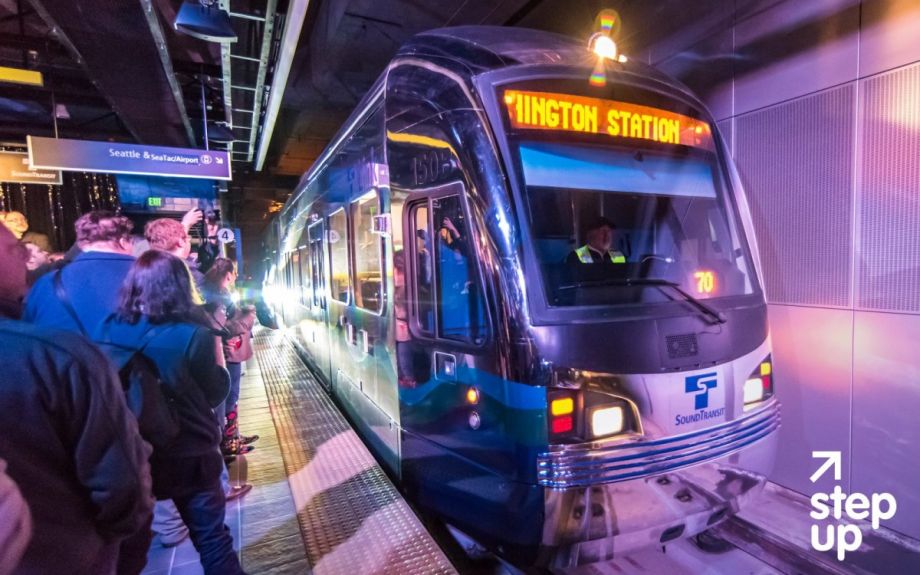 Seattle Celebrates Early Rollout of Light-Rail Expansion
In Seattle, where tunneling projects have had trouble staying on course lately, officials celebrated the completion of one that did stay on course this past Saturday.

Seattle’s KING5 TV reported that the University Link LRT extension connecting downtown Seattle with the University of Washington campus was completed six months ahead of schedule and $200 million under budget.

The tunnel also includes a subway station at Capitol Hill, where the formal ribbon-cutting took place. Resident Michael Connolly noted that the bus he takes downtown can take as long as 45 minutes to get there from Capitol Hill at rush hour, while the train will make the trip in only six minutes.

Sound Transit officials were also pleased the line was open, given how smoothly the project went. “This agency has matured and we’ve gotten better and better at delivering these projects,” said King County Executive Dow Constantine, chair of the Sound Transit board. Constantine said that the agency would be able to do more engineering on the line’s planned extension to Federal Way with the money saved on the University Link project.

The line’s completion may also help the agency make the case for the Sound Transit 3 tax package, which would fund further extensions of the LRT system.

British Commission Urges a Fast Track for London’s Crossrail 2
The first passengers have yet to board trains on the new Elizabeth Line, formerly known as Crossrail, and a newly formed British government commission says London needs to get cracking on building another one.

People pass along a walkway in a Crossrail tunnel in east London. (AP Photo/Matt Dunham)

Global Rail News reports that the National Infrastructure Commission is urging that a funding package for the proposed Crossrail 2 express subway route be nailed down as soon as possible to give government ministers a bill to consider by 2019.

The commission’s report identified three requirements for any Crossrail 2 program: London should pick up half the project’s tab, the stations should be built with private financing and it should also include a concrete plan for providing the 200,000 new housing units slated to accompany the project.

In urging that progress toward building the northeast-southwest tunnel through London start as soon as possible, commission Chairman Lord Andrew Adonis said, “A new northeast to southwest line would help relieve severe overcrowding across some of the busiest Network Rail stations in the country, and the most congested Underground lines and overground commuter routes. … There is no good reason to delay. Crossrail 2 will help keep London moving, create hundreds of thousands of homes and fire regeneration across the city from northeast to southwest.

The Clock is Ticking on Virginia Beach LRT Decision
With opponents of a proposed Hampton Roads Transit LRT extension into Virginia Beach pushing for a referendum on the proposal, the state of Virginia has set two deadlines for the city to fish or cut bait on the project.

According to a story in Mass Transit, the Commonwealth Transportation Board has given Virginia Beach until April 30 to tell Hampton Roads Transit to submit a grant application for the purchase of new rail cars to the state Department of Rail and Public Transportation and agree to a memorandum of understanding that spells out what the city, state and HRT are responsible for. The Virginia Beach City Council is set to vote on that memorandum April 5.

The second deadline is Dec. 31, by which date the city must issue a request for proposals to design and build the extension. This deadline gives the city time to hold a referendum in November and make a final decision on proceeding with the project.

If the city decides to kill the extension at any point between now and Dec. 31, it will have to reimburse the state for costs incurred to date, including the $20 million the state spent to purchase the right-of-way in 2010. The state will then toss the $155 million it has set aside as its share of the project’s cost and the repayment back into the general pool of funds available to Virginia cities on a competitive basis.