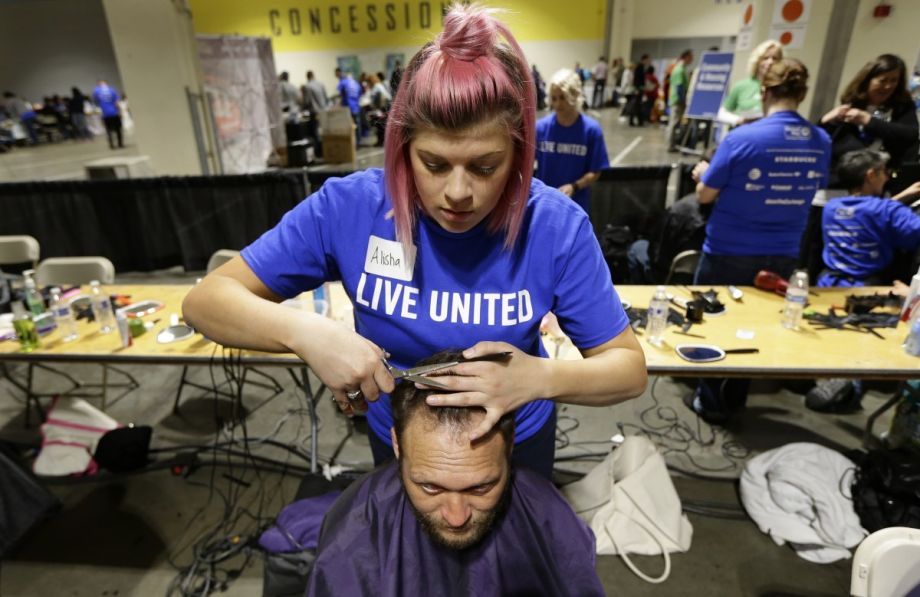 A hair stylist volunteers at a United Way of King County event designed to provide opportunities for people who are homeless and facing other challenges to access resources and services available in the Seattle area. (AP Photo/Ted S. Warren)

In one of America’s wealthiest cities, where the average tech employee salary is $74,000 a year, a January count found more than 4,000 homeless people across Seattle and King County — a 19 percent increase over the previous year’s tally. A high cost of living, limited affordable housing options and years-long waiting lists for subsidized housing have forced some Seattle residents into shelters; some seek refuge under bridges or in makeshift tent communities. Last November, Seattle Mayor Ed Murray declared a state of emergency regarding homelessness.

Now, amid several efforts aimed at supporting the homeless population, the city of Seattle and several local nonprofits are piloting a new employment project. According to city leaders, “Jobs Connect” will help over 1,000 people find short-term, full-time jobs in its first year.

According to Director of Ending Homelessness Vince Matulionis, of United Way of King County, the initiative, which kicked off last month, is raising a budget of $250,000. The city of Seattle has contributed $92,000, and the United Way has received donations from several private donors. Other partners include the Millionair Club Charity and the Downtown Seattle Association.

“We know, based on data, that modest interventions like job programs can help a significant portion of people who are homeless move out of their situation. With a little investment on our part over the next three years, we can get people back to work,” says Matulionis.

Jobs Connect takes notes from a similar initiative launched in Albuquerque, New Mexico, last year that tapped people panhandling and connected them immediately with jobs and social services during the day.

“Previously, we haven’t had supportive services immediately available for folks. Many of them are trying to deal with daily life issues like where they’re going to take a shower or get their mail, in addition to taking on a 40-hour-a-week job. We see real value around the alignment of services, housing and employment,” says Jon Scholes, program director at the Downtown Seattle Association, which serves as an anchor employer for Jobs Connect.

The DSA maintains downtown streets and is currently training a cohort of people from the homeless community and will add a few dozen positions to their “clean and safe” team in the coming months. All employees will have access to health benefits.

Scholes points to targeted recruitment and outreach efforts as part of the model to reach out to homeless people looking for work. The program aims to make contact with at least 3,000 individuals this year.

Every day, in a 15-passenger van, members of the DSA team will head to key downtown areas to engage with folks who appear to be homeless and looking for work. Similar outreach will be conducted by the Millionair Club Charity, which already runs and operates temporary staffing services, job training and licensing for those experiences homelessness.

“People who are living unsheltered find it hard to believe that they’re employable,” Jim Miller, Millionair Club Charity executive director, said in a press statement. “Their clothes are dirty; they’re cold, hungry, and have a backpack they have to carry around at all times with all their possessions. Jobs Connect gives us the power to take our message to them where they’re living, bring them back to the Millionair Club Charity, and give them the support they need to be job ready. It’s an amazingly empowering message for people at their lowest ebb of confidence — and one that will hopefully be the start to getting them into a job and housing.”

Funding for Jobs Connect will also go toward extending hours at the Millionair Club’s local storage and hygiene facilities so new employees don’t have to worry about making it back in time from work to shower, do their laundry or eat a hot meal. Transportation costs and job training are also covered.

After measuring the results of the efforts, the partners hope to extend the program beyond downtown and into neighborhoods where homelessness is becoming increasingly pervasive like South Downtown, Ballard and the University District.