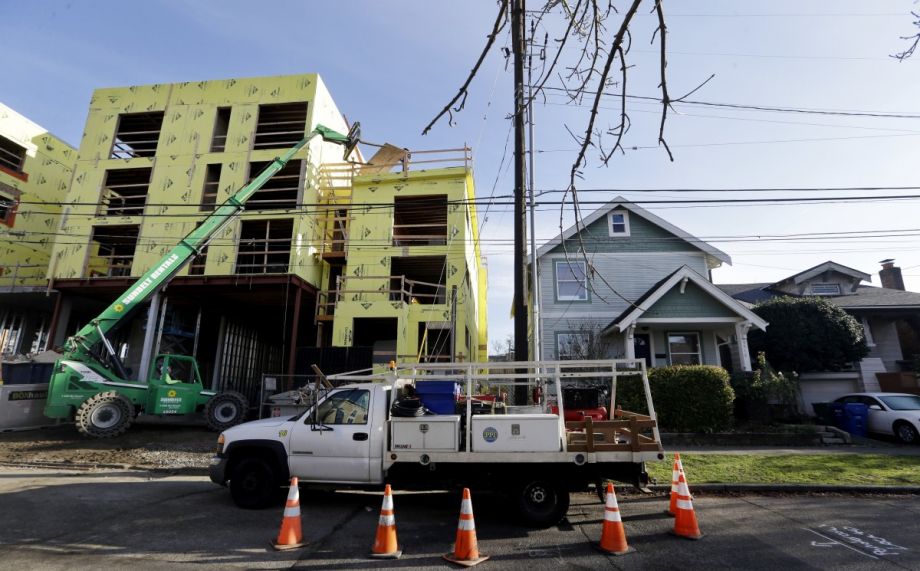 The Seattle Department of Constrution and Inspections sees earlier community engagement by developers as a win-win for all sides. (AP Photo/Elaine Thompson)

For real estate developers, there’s a deep catalog of approaches to take when trying to build community support for a new project. And John Feit, chair of the Pike/Pine Urban Neighborhood Council, representing a dense, active stretch of Seattle’s Capitol Hill neighborhood, has seen them all.

“Seven or eight years ago, applicants would try to divide and conquer [the neighbors],” Feit says. “If you take us all out for coffee, we’ll all say something different. And then they’d use that against us, saying, ‘You don’t really represent anyone.’”

Other times neighbors only find out about a project proposal when the design is more or less set in stone, Feit says, “And we’ll interject ourselves into the discussion rather late, which isn’t the best way, because it’s too late for us to have any meaningful dialogue.”

Still, most of the time developers are sincere in their desire to get communities to buy-in to a design, Feit says. The best scenario — and the rarest; it’s happened only a handful of times — is when the developer invites neighbors to a site before the project is even assigned to an architect, and asks questions about the site characteristics and the surrounding context.

“It’s good to meet onsite,” Feit says. “That’s the most effective thing. And to walk around and for community members to point out what they like and don’t like.”

This month, the City of Seattle is enacting a new set of regulations related to Design Review, an official city process that has allowed community members as well as professional planners and designers to weigh in on new development projects in Seattle since 1994. Among the updates, which were proposed in draft form last summer by the Seattle Department of Construction and Inspections and adopted by the city council in the fall, is a measure that allows the department to make rules for community outreach and early design guidance for projects going through Design Review. A new rule for early community outreach, intended to “ensure that applicants provide early notification to the local community that a project is being planned as well as opportunity for the local community to engage in a dialogue with the applicant about the project,” took effect July 1.

In the past, outreach from developers to communities happened informally, says Lisa Rutzick, the Design Review program manager for Seattle.

“The way we’ve designed it with the new requirement is that it will be the very first stage of the process, where the applicant is just submitting their very first paperwork with the city,” Rutzick says.

The requirement is outlined on a new web page, which is publicly accessible for developers and community groups. It calls on developers to submit community outreach plans to the city at an early stage, before the later Design Review meetings. Developers can create plans that include a mix of in-person, digital, and printed strategies laid out in the requirements. The Department of Neighborhoods will let applicants know which neighborhood groups to contact, and post details about new applications on its project blog.

Rutzick says that often during the Design Review process over the years, community members have wanted to talk about other issues, like zoning or building use or maintenance. But the purview of the review meetings, which are conducted by eight Design Review Boards covering different parts of the city, is limited only to design. Encouraging earlier contact with communities could allow some of those other conversations to be more productive, Rutzick says.

Another addition to the outreach requirements is the establishment of “equity areas,” historically underrepresented census tracts that meet two out of three criteria, including having more people of color, low-income residents, or households with limited English proficiency than the city as a whole. In those areas, developers will have to work with the Department of Neighborhoods to develop outreach plans that are tailored to the local community.

The goal, says Danielle Friedman, community outreach and engagement advisor for the Department of Neighborhoods, is to help connect developers to a wider cross-section of those communities, rather than just the usual self-selected participants. Additional outreach in equity areas could include advertising in foreign-language outlets, hosting in-person meetings at certain times and places, or direct-mailing to apartment buildings rather than flyering. The Department of Neighborhoods will work with developers to customize plans for each project in an equity area.

“We have people at the Department of Neighborhoods that work really closely with communities,” Friedman says. The goal of tailored plans is to create “true outreach and engagement so that all voices are heard” before the formal Design Review meetings even begin.

And the city hopes the new process will lead to better outcomes. Christina Ghan, a senior planner at the Seattle Department of Design and Inspections, who helped develop the new guidelines, says that there have been instances where informal early outreach has created better projects. One developer started talking with the community when he was trying to figure out how to arrange the massing of the building on the site. Neighbors had some input about the context, and what they wanted to see in the general form of the building, and those conversations ended up shaping the project, Ghan says. But if they’d happened at the end of the process, it would have been too late for such foundational considerations.

“It ended up being kind of a win-win for that project,” Ghan says. “And if you’ve already gone through your early stages of Design Review, it’s hard and expensive to redo that.”