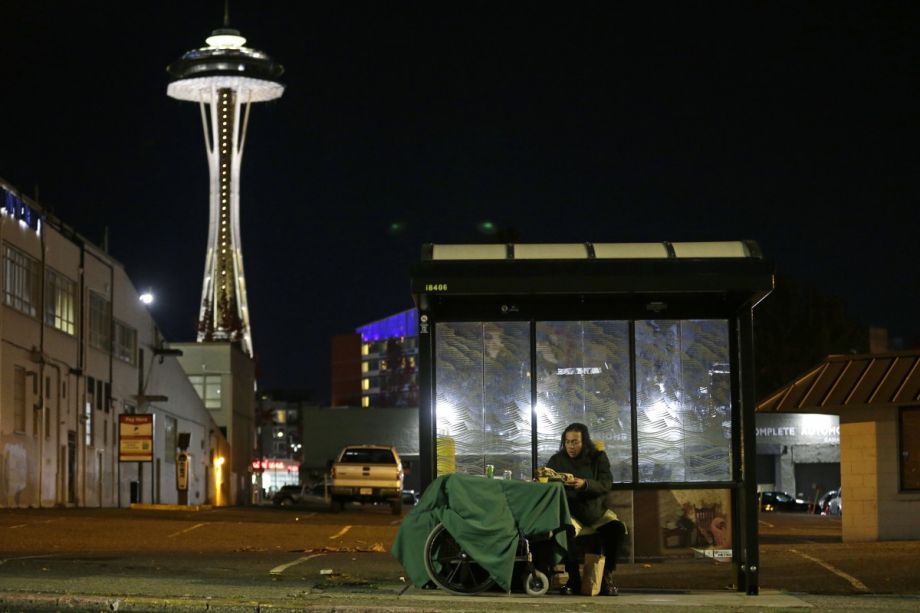 In this Oct. 30, 2017 file photo, Dave Chung, who says he has been homeless for five years, settles in for the night at a bus shelter in Seattle. As Seattle's economy has boomed, the number of homeless people in King County has grown and the affordable housing gap has increased. (AP photo/Ted S. Warren, file)

Washington State famously has no income tax, relying on sales and property taxes to fund everything from housing to transportation to education. It has the most regressive tax system in the country, with low-income residents paying vastly more of their income than wealthier residents. That disparity is perhaps starkest in Washington’s largest city: A 2016 study of U.S. tax burdens found Seattle had the dubious honor of being the only city in the country to be in the top 5 highest burdens for people earning $25,000 and top 5 lowest burdens for people earning more than $150,000.

The city wants to changet that. Last week, Seattle’s Progressive Revenue Task Force released its final recommendations for an Employee Hours Tax (EHT) to fund affordable housing construction and homeless services. If adopted by the city council, the proposal, which would tax employers based on their revenue and number of employees, would generate an estimated $75 million annually. In addition, the task force proposed several other progressive revenue streams that could raise another $75 million a year.

As the cost of living continues to climb skyward in Seattle, the number of homeless people in King County has grown to more than 11,600 and the affordable housing gap has increased. The Housing Development Consortium, a Seattle-based nonprofit, estimates the city will need more than 20,000 new units of housing affordable to people earning 0 to 30 percent of Area Median Income (currently $0 to $20,200 for a single person) in the next decade. The task force calculates meeting that need will cost $340 million a year for 10 years.

The goal of the task force—created last November after the city council rejected a different version of an EHT—was to find a progressive revenue stream to fund that need.

“When we look at how to address the homelessness crisis it’d be nice to not just slap on more regressive taxes that disproportionally burden low and middle income people,” says Wilson. “There’s also a question of how much we can just keep raising regressive taxes, before we see political and voter push back.”

A tax on employers scaled by annual gross revenue and number of employees is more equitable than another property levy or sales tax increase. The task force proposed three options for structuring the EHT. The first would affect companies earning $10 million annually in gross revenue. They would pay a percentage of total payroll, based on how many employees they have, between 1/4 of 1 percent up to 3/4 of 1 percent. The other two options have a lower threshold of $8 million per year in gross revenue and charge a flat rate per employee per year that increases for companies with more than 500 employees. In all three scenarios, the task force recommends a flat $200 per year “skin in the game” fee for companies earning less than the threshold.

It’s hard to estimate what companies might pay under the first scenario, because payroll info is not public. At the high end, the city’s most talked-about employer, Amazon, which had about 40,000 employees in Seattle in 2017, would pay roughly $18 million a year in EHT under the second proposal.

The task force recommends 80 percent of the EHT revenue be spent on housing construction and 20 percent spent on homeless services and shelters, an approach that Alison Eisinger, director of the Seattle-King County Coalition on Homelessness, supports. She says, “It is more or less the right direction. We need to prioritize creating homes and getting people into those homes. It’s equally imperative that we not ignore the immediate critical plight of people who don’t have a safe place to lay their heads.”

Though Eisinger also points out $75 to $150 million a year is not enough to meet the affordable housing need by itself, she’s buoyed by the direction things are heading. “It is really significant that we are not pretending that another $10 or $20 million here or there is what we need.

“We’ve come to a watershed moment where people are really grasping that if we want things to be better for people living here, we need to fix our upside-down tax structure.”

Eisinger points out that an EHT would give the city a new steady revenue stream to bond against, further increasing its ability to make the needed capital investments in affordable housing.

In addition to the EHT, the task force outlined several recommendations for generating another $75 million without relying on regressive taxes. They include taxes on speculative real estate investment, second homes and vacant or unoccupied properties, an increase in the Real Estate Excise Tax on high-value properties and a local estate tax. Most of the proposals would require the city to seek new authority from the state legislature. The additional recommendations would be considered separate from the EHT.

The city council has no obligation to adopt the task force’s recommendations. But given that EHTs aren’t completely new ground for Seattle, advocates are hopeful about the tax’s chances. The city adopted an EHT in 2006 to fund transportation improvements. Companies paid a flat $25 per employee per year, which was projected to raise $50 million over 10 years. The tax was repealed during in 2009 during the Great Recession.

Last November, the council narrowly rejected an EHT that would’ve raised $25 million annually. The reasons for the rejection included a lack of input from businesses, a feeling that the EHT process had been rushed, and a lack of specificity about how the new revenue would be spent. Hence the task force. In creating the task force, the council set a deadline of taking action on the EHT by March 26 or “early enough to ensure that EHT revenues can be imposed as of January 1, 2019.”

The council likely won’t meet that March 26 goal, but both Wilson and Eisinger hope that they’re still moving with the urgency to get the tax in place at the start of next year.

“There’s no such thing as a perfect revenue source,” says Eisinger. “But I think everybody understands we cannot wait for the perfect to do something good and important now.”