Two weeks ago, the Seattle City Council authorized the purchase of a parcel of land owned by a notorious slumlord to build a new pocket park. It is the culmination of a years-long effort to deal with nearly three blocks of decrepit housing in the Roosevelt neighborhood and a months-long fight over what to do with the land once the city got the property. Some see the park plan as a necessary concession in a neighborhood that will be transformed by a coming light-rail station. Others see it as a missed opportunity for a city desperate for new housing, income restricted or otherwise.

The parcel’s former owners own over 50 properties near Roosevelt High School in northeast Seattle, and they’ve racked up $3.5 million in building code violation fines. They took the issue to court and have been fighting the city’s charges for years. Last March, Mayor Ed Murray and City Attorney Pete Holmes announced the city’s intention to seize two of the properties as recompense. At the time, they promised a small park for the property, a concession to vocal neighborhood residents concerned over the added density of transit-oriented development around the light-rail station coming in 2021.

Murray temporarily shelved that plan in May in response to protests by urbanists and housing advocates. Futurewise, a Seattle-based nonprofit focused on land use and conservation, submitted a letter at the time urging city council to build affordable housing instead.

“We love open space. Part of the reason Roosevelt is such a great neighborhood is because it has so much open space. But the amount of land we have around transit stations is precious, and we need to make sure it’s put to its highest and best use,” says Amy Gore, Futurewise sustainable communities director.

The property sits between two major parks to the south and two pocket parks to the north. Cowen and Ravenna parks form nearly 60 contiguous acres of forested parkland and the northwest corner sits just .2 miles from the property under debate. Froula Playground is six blocks to the north. Rainbow Point pocket park is a few blocks west of that. The nearly 260-acre Greenlake Park, while not in the Roosevelt neighborhood, is less than a mile from the city’s proposed pocket park.

This map shows all the parks around the proposed new park and its location relative to the future light-rail station. 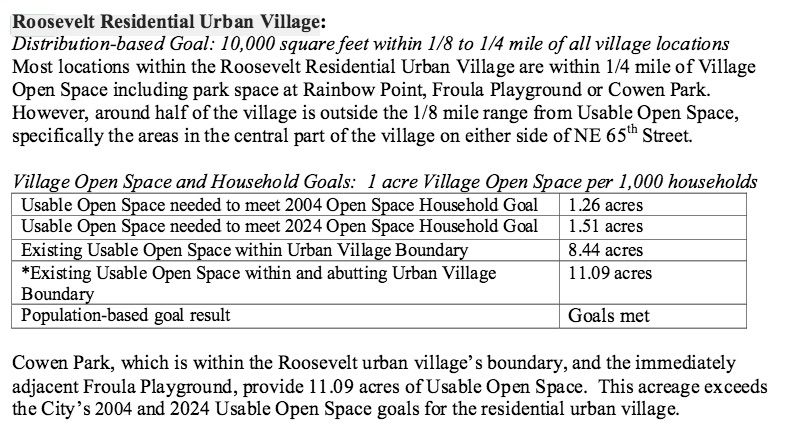 Those numbers will drop some in the coming years as new residents move into the transit-oriented development planned around the future light-rail station. But it’s clear that the neighborhood isn’t suffering from any real lack of park access.

Over the summer, the Office of Neighborhoods did further outreach with Roosevelt residents before Murray settled on the park plan. In that time, developer Roosevelt Development Group (RDG) paid off the former landlords’ $3.5 million fines. RDG has long-term ground leases on 51 of their properties and plans to develop heavily around the light-rail stations. They couldn’t move forward until the fines were paid so they did just that.

The city now plans to use the funds from RDG to purchase one of those blighted properties. Murray announced his final decision in a September 15th letter to council. In it he cites residents’ requests for open space. Murray’s office did not respond to an email and phone call requesting comment for this article, but in the council letter he writes, “For years the community has expressed a desire for more open space.” Murray also writes that having a park on the property will preserve views of Roosevelt High School, which “remains the community’s number one priority.”

To be fair, Murray wants to use $500,000 of RDG’s fine payment for tenant assistance and outreach citywide. Half that money will be given to community organizations to help with relocation for tenants displaced by rising rents. The other $250,000 will be used to help tenants with criminal records and other problems overcome barriers to housing access.

Murray also points out that RDG has submitted proposals for four projects with 329 units, 69 of which will be rent restricted through the city’s multi-family tax exemption program. Another developer submitted a proposal to Office of Housing that includes 16 affordable units.

Still, it is a surprising move considering the ambitious 10-year housing goal Murray set with his Housing Affordability and Livability Agenda (HALA). That calls for the creation or preservation of 50,000 units of housing, 40 percent of which will be rent-restricted affordable units. It is also surprising given that the final report produced by Murray’s HALA commission recommends the city start using surplus public property to build affordable housing.

A public park is certainly better than derelict housing and RDG’s plan to build hundreds of new units is great. But according to the HALA report, Seattle has at the best of times only built about 800 affordable units a year. The city will need to take advantage of every opportunity it can to meet Murray’s HALA goals.

Given the council’s unanimous vote to move forward with the park plan, Gore says there’s likely little to be done to push for housing at this point. Instead she’s hoping the city creates clear guidelines moving forward for how they intend to use public land to build affordable housing.

“Obviously everyone loves parks,” she says. “But we need to balance that with our huge need for affordable housing. Hopefully the city as we move forward with implementation, the city comes up with very clear guidelines that quantify how we make these decisions.”