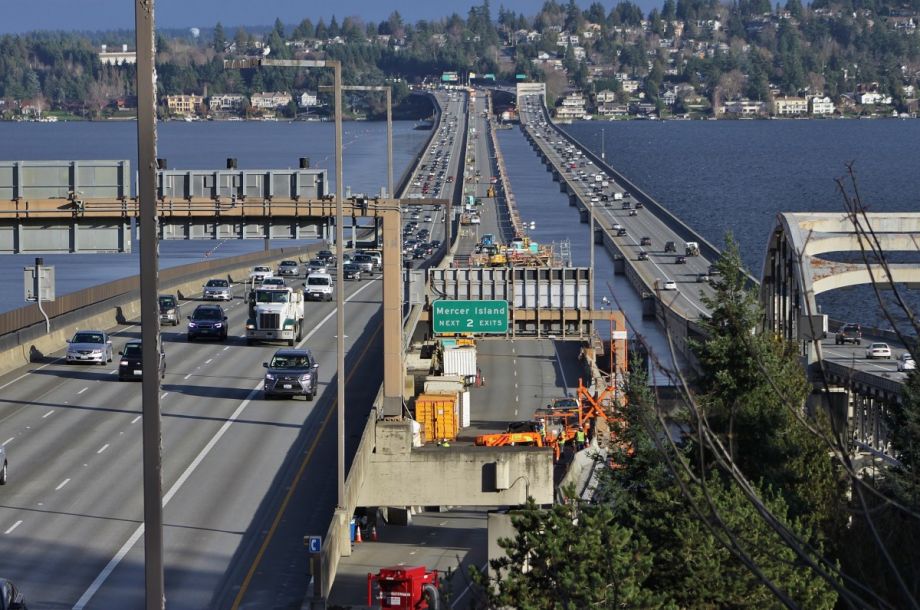 The I-90 floating bridges (seen in 2018) across Lake Washington were strengthened to support the coming light-rail trains. (Photo by SounderBruce)

Among the milestones passed in the first half of the project: Completion of three miles of elevated viaduct, the digging of a tunnel under downtown Bellevue, strengthening the I-90 floating bridge so that it can support the trains and laying of a mile of track. In addition, the station on Mercer Island is nearly complete, a bridge has been built over I-405, another bridge in Seattle has been removed to make way for a future station and half of a long-span overpass over I-90 has been built.

This year’s work schedule includes building the rail lanes on the I-90 floating bridge, another elevated viaduct, parking lot and garage construction and building a pedestrian bridge in Redmond.

The 14-mile line connecting downtown Seattle with Mercer Island, Bellevue and Redmond should be ready to welcome riders in 2023.

The intital 9-km (5.6-mile) segment contains three stations: an interchange station with Line 4 at Shohada Square, its northern terminus; the southern terminus at Dowlat Abad; and an intermediate station at Besat. Six more stations will be added to this segment at a later date.

The second segment, a 23-km (14.3-mile) extension northwest from Shohada Square to Kan, is set to open next March. According to a report in the English-language Iranian business newspaper Financial Tribune, Line 6 will be the longest of Tehran’s seven metro lines when complete; the finished line will have 27 stations along 38 km (23.6 miles) of route.

As part of its effort to shrink a growing operating deficit, the Santa Clara Valley Transportation Authority (VTA) will end service on a lightly used LRT route as part of a larger restructuring of transit service in Silicon Valley.

The line, known as the Almaden Shuttle, had been threatened with closure twice before, the International Railway Journal reports. Opened in 1991, the 3.5-km (2.2-mile) branch line from Oholone/Chynoweth to Almaden had ridership well below projections from the start. In 2018, only 141 passengers on average boarded trains at Almaden every weekday, and only 166 caught the train at Oakridge, the shuttle’s one intermediate stop.

VTA will replace the LRT service with a bus shuttle later this year as part of a new service plan the VTA board will vote on next month. The plan includes other changes and cutbacks aimed at reducing a projected $26 million operating deficit. Ridership plunged by 23 percent on the VTA’s system between 2001 and 2016.

In other plunging-ridership news, Cleveland.com reports that ridership on the Greater Cleveland Regional Transportation Authority system now stands at less than one-third of its level in 1976, the year several local operators merged to form the regional authority. Ridership climbed in the agency’s first five years, reaching an all-time high of nearly 129.7 million in 1980, but since then, the ridership curve has sloped downward in a jagged line. Ridership has set record lows in each of the last three years, falling to just over 35 million in 2018.

The article blamed the losses on a number of mostly external factors, including the decline of central Cleveland as a regional job center, relatively low congestion on area highways, lower gas prices and a growing number of people who work from home. The RTA has made numerous route and service cuts over the years to cope with the decline.