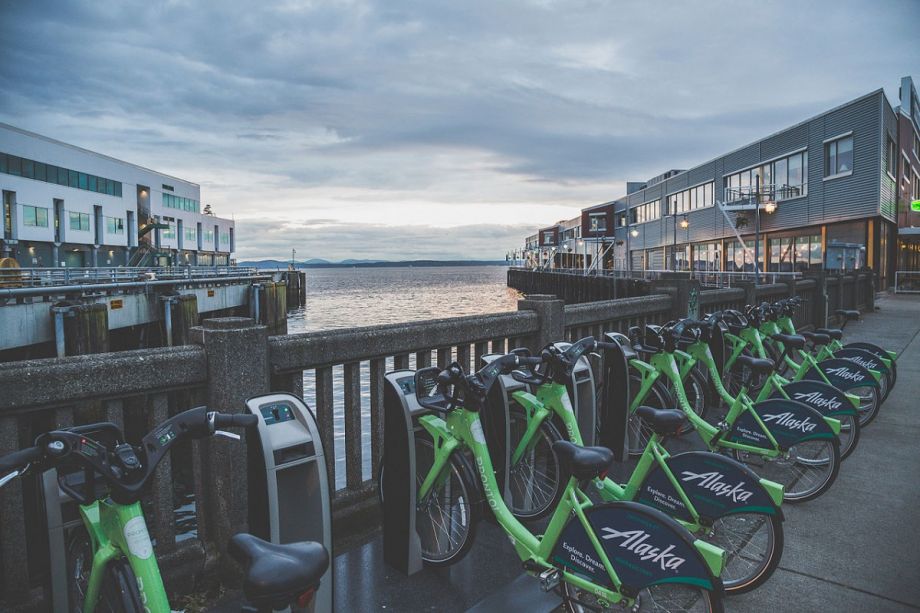 Last week, Seattle Mayor Ed Murray rolled out his proposed $5.1 billion 2016 budget. Tucked among plans for body cameras, jobs initiatives and seawall funding was a $5 million item for Pronto bike-share expansion. The city is putting up the matching funds necessary to qualify for a $25 million TIGER grant, $10 million of which would be used to quintuple the number of stations and bikes and add electric-assisted bikes to the fleet.

The $5 million budget entry is essentially the city’s first act as Pronto’s new owner. As Seattle’s bike-share system nears its one-year anniversary, the Seattle Department of Transportation (SDOT) is taking over system management, and nonprofit Puget Sound Bike Share, the previous owner/manager, is being dissolved. It’s a move the city says will help Pronto more quickly expand to the size necessary to serve as a form of public transit.

“For bike-share to really operate well it’s got to be done at a huge scale,” says SDOT Director Scott Kubly.

If Seattle gets the TIGER grant, they will increase the number of stations from 50 to 500 and number of bikes from 500 to 2,500. SDOT also plans to purchase electric bikes that assist the rider while they pedal (as opposed to using a moped-like throttle), which, Kubly says, should open the doors to commuting by Pronto to many more people.

And ultimately, that’s the point of all this. Seattle’s current system is small, clustered in the downtown core and has seen relatively low ridership in its first year. After seven months of operation, users had taken just 70,700 trips. Compared with over 35,000 daily rides on New York’s Citi Bike, 13,000 on Chicago’s Divvy and 5,700 for Capital Bikeshare (CaBi) in D.C., that’s miniscule.

Of course New York and Chicago dwarf Seattle and D.C.’s had bike-share for much longer, but the real key, says Kubly, is having a big enough system to make bike-share as convenient to use as buses and trains.

“When done at scale, bike-share is public transit and really effective public transit,” he says. Kubly points to his experience in D.C. He was associate director of the District DOT when they launched SmartBike in 2008. The trial program had 10 stations, and each bike was ridden less than once per day. When CaBi launched it did so with 110 stations and daily ridership went up to around five times per bike per day, according to Kubly.

The city says it can get the system up to scale faster and better manage it once it’s there.

“Seattle is making a major investment [in expansion],” Kubly explains. “We wanted to make sure along with that investment we were actively engaged in day to day of management of the bike-share system.”

Part of the advantage, to his mind, is that SDOT simply has a larger organizational infrastructure to run the system than Puget Sound Bike Share did.

“I give Ref [Lindmark, Pronto board president] and Holly [Houser, former PSBS executive director] huge props for getting it up and running,” says Kubly. “But when it’s a big municipal system, we can’t rely on a single point of contact for everything.”

Kubly says city management will also give them better access to federal funds, a greater ability to install new stations in good locations and perhaps improve the locations of current stations, and more media coverage since news outlets are perhaps likelier to cover the goings-on of the city than of a nonprofit. “So much of a successful bike-share system is about marketing,” he notes.

Pronto’s re-org is, in some ways, another example of American bike-share trying to figure out how to brand itself: transportation for tourists, a tool for recreation, transit for locals? Though it’s not their only stated goal for Pronto, Seattle wants it to be seen as part of its transit network.

“Given that those are Seattle’s goals, the approach they’re taking [with city management] is really smart,” says Bill Dossett, executive director of Minneapolis bike-share Nice Ride and former president of the North American Bikeshare Association board.

He does not, however, see city bike-share management as inevitable for every system around the country: “There is no consensus around a single best system. When you look at other cities with other goals, city management makes less sense.”

Nice Ride is a nonprofit, which Dossett says best serves one of their primary goals of health and active living because they can shape their programming to that end. Other cities that want to use bike-share primarily for tourism and downtown economic development might be best run by private entities.

Perhaps unsurprisingly, Dossett says one of the potential downsides of DOT management is the risk of bureaucracy slowing everything down.

Pronto’s major expansion hinges on the TIGER funding. Kubly says there will be a much smaller expansion if they don’t get the grant. If they do get the money, Kubly is confident it will change the way Seattleites think about bike-share.

“I think there’s this initial skepticism pre-launch of this big bike-share system in terms of what it can mean and the impact it can have,” he says. “After it launches it becomes totally clear. It gets hard to conceptualize the city without it.”