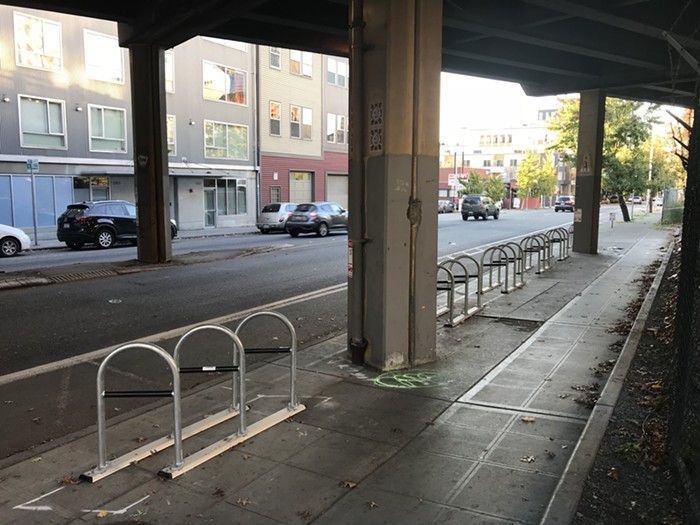 Last September, the Seattle Department of Transportation (SDOT) installed 18 bike racks under the Highway 99 Viaduct in Belltown. Their purpose was not actually to encourage people to lock up their bikes, but to prevent the occupants of a recently cleared homeless encampment from returning to the spot. News of the bike racks and their intended function broke in December, public outcry followed and some city officials denounced the department’s misuse of bike infrastructure. Last week, SDOT announced they would relocate the bike racks.

“Mayor [Jenny] Durkan has made it clear that bike racks should be deployed to support and encourage biking. … SDOT plans to remove the bike racks after a location is identified to ensure the greatest use to bicyclists in Seattle,” SDOT said in a statement to PubliCola. SDOT did not respond to request for comment.

The number of unauthorized encampments in Seattle has increased as the region’s homeless population has grown — there are at least 11,643 homeless people living in King County, 5,485 of whom are unsheltered. The city has a policy of clearing encampments they deem hazardous or blocking a public right of way.

Seattle resident Jeff Few lives right next to the former Belltown encampment site. Because there isn’t a demand for bike parking at that location, he was suspicious about the city’s intentions when the racks were installed immediately after the encampment sweep. He confirmed his suspicions with a public records request. The emails he obtained show SDOT coordinated the timing of their rack installation with the sweep as part of a “Homelessness Emergency Response effort.”

After The Stranger broke the news of Few’s findings, several councilmembers and the mayor spoke out against the project.

“It’s good news that SDOT went back to the drawing board and is moving away from using bike racks for displacement purposes,” says Councilmember Teresa Mosqueda, one of the project’s critics. “While we’ve gotten resolve on the bike racks under the Alaskan Way Viaduct, we need to make sure if there is a fund being allocated for hostile architecture, it is redirected to housing options for those that are unsheltered.”

Using bike racks to discourage street camping is a textbook example of hostile architecture—though according to Selena Savić, co-editor of the book Unpleasant Design, this is the first she’s heard of bike racks being used this way. Other classic examples are spikes or bumps installed on ledges and windowsills that make it uncomfortable to sit or lay down and armrests in the middle of benches that prevent people from sleeping on them.

“The most important feature of hostile architecture is to function without being detected,” says Sara Rankin, Seattle University law professor and Homeless Rights Advocacy Project director. “It serves a function of forcing out targeted or undesirable users of public space, but is supposed to be imperceptible to non-targeted users. That helps shield public officials from pushback.”

Though it’s unlikely SDOT will use bike racks for ulterior purposes in the future, there are still plenty of examples of hostile architecture throughout Seattle, including benches with center armrests and so-called leaning benches that provide an angled bar for people to lean against, but have no seat to allow sitting or laying. The city has also spent millions on fencing to block encampments from returning after being cleared, though Rankin points out fencing is not technically hostile architecture since its purpose is very explicit.

She argues that the fences are, however, on the same spectrum of anti-homeless measures including hostile architecture and homeless criminalization laws that make life harder for homeless people without addressing any of the root causes or providing solutions.

“There are laws that prohibit or limit the ability to sit or stand [in public], receive food from other people, ask for help, protect yourself from the elements. They’re extraordinarily ineffective, cruel and wasteful. They do nothing but exact devastating penalties on our most vulnerable residents,” Rankin says.

Rankin co-authored a report on the cost of enforcing homeless criminalization laws in Seattle and Spokane. It estimates that over a period from 2009 to 2013, Seattle spent at least $2.3 million enforcing those laws.

“We know hostile architecture and criminalization laws are ineffective. They’re also terribly expensive. … Dealing with the laws would have a bigger impact on homelessness than dealing with one cruel, unnecessary fence or bike racks,” she says.

It’s an argument that has resonated with some councilmembers. Last year, councilmember Mike O’Brien proposed an ordinance to decriminalize RV and car camping on Seattle streets.

Discussing the issue of hostile architecture at a council committee meeting last week, O’Brien said, “There’s a lot of urgent need in the community and every dollar we’re spending on something that seems wasteful is a dollar that can’t be going to something that’s good.”