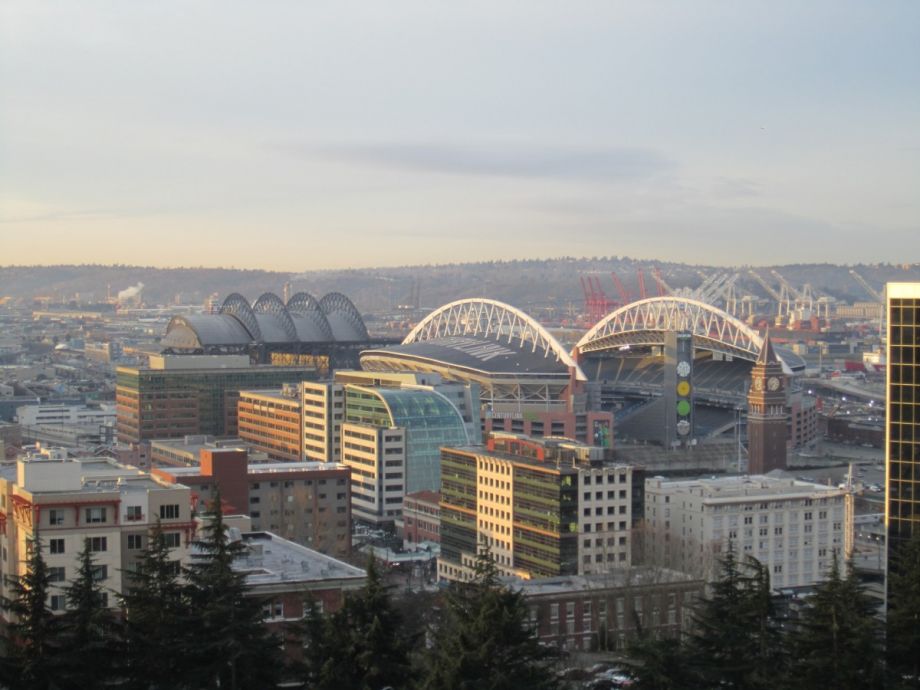 CenturyLink Field and Safeco Field (foreground) aren't likely to get an arena for a neighbor because of potential negative impacts on the Port of Seattle (background). (Photo by SounderBruce via Flickr)

Much to the dismay of local NBA and NHL fans, Seattle’s city council voted this week against vacating a street south of downtown to build a third arena in the SoDo District, citing concerns about traffic and impacts on the nearby Port of Seattle, reports the Seattle Times. The proposal, rejected in a 5-4 vote, would have given over half of Occidental Avenue South to hedge fund manager Chris Hansen to build an arena using a mixture of public and private funding. A deal between Hansen and the city would have provided him with up to $200 million in public bond money, provided he landed an NBA team before the agreement expired in November 2017.

Had the council approved the street removal, Hansen would have had five years to build an arena — just south of the existing CenturyLink and Safeco Field venues — even after public funding ran out. Attracting an NBA team back to the city has been a goal of local sports fans since the Seattle SuperSonics relocated to Oklahoma City in 2008, having failed to secure public funding for a new arena.

The five dissenting council members cited danger to the port and employees there. Maritime unions and the Port of Seattle opposed the measure as well, saying increased arena traffic could slow operations. Council Member Kshama Sawant, one of the country’s only socialist elected officials, said she did not like being in a position where “I have to pick sports against jobs and jobs against jobs. … I do want to help bring back the Sonics, but I cannot do that on the basis of undermining our working waterfront and good-paying unionized industrial jobs.’’

Council Member Debora Juarez spoke about the unique and irreplaceable value of a deepwater port, compared to an arena without a committed team that could be built elsewhere. A report last year by engineering firm​ AECOM indicated that the existing KeyArena could be renovated to NBA and NHL standards for $285 million. The Seattle Times recently uncovered documents, however, demonstrating that city officials failed to update an environmental impact statement on the SoDo site to reflect that study, so that the city continued to assert a KeyArena remodel was unfeasible.