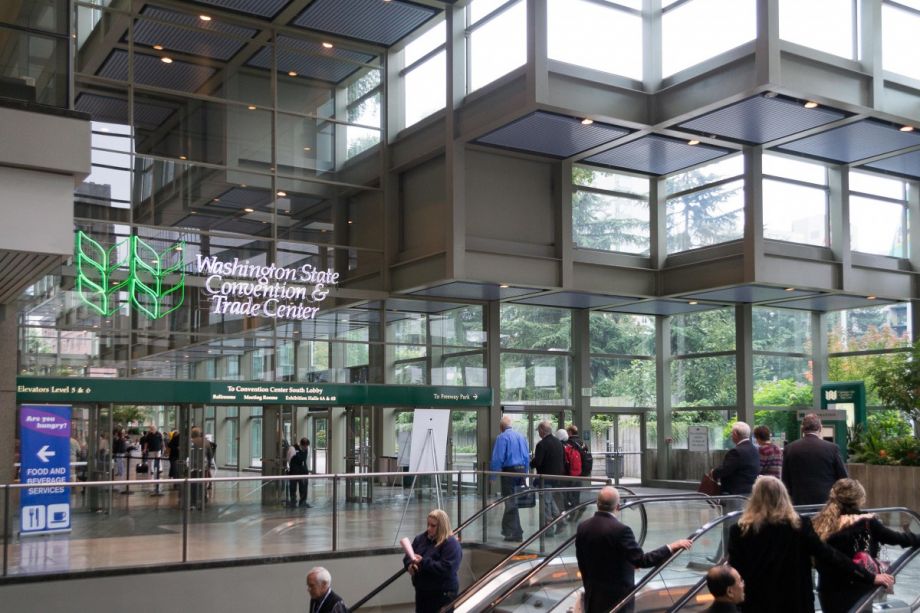 The Washington State Convention Center (WSCC) is massive — occupying nearly four city blocks on either side of Pike Street in the heart of downtown Seattle. In 2015, it hosted 340 conventions and generated an estimated $375.5 million in spending from out-of-state attendees. But the WSCC wants more.

Efforts are underway for a $1.6 billion convention center expansion. Plans call for three new adjacent buildings: a 5-story exhibition hall, a 30-story apartment building and a 16-story office tower. WSCC officials say the project is a public good that will double hosting capacity, in turn creating jobs and bringing in more out-of-state spenders. The Community Package Coalition, a newly formed group of neighborhood organizations, says the convention center needs to offer the public more benefits to match the impact the 4-block redevelopment project will have on the city.

“Many convention centers around the country are saying ‘we’ve got to be bigger to compete.’ Seattle’s not that case. We actually turned away more business in the last five years than we booked,” says Matt Griffin, managing partner at Pine Street Group, the developer spearheading the expansion. The larger space could bring in some larger conventions, but the primary goal is to be able to host multiple conventions at the same time, creating a steady stream of conventioneers instead of having spikes and lulls.

WSCC estimates that growth would generate another $200 million in out-of-state spending and $35 million from in-state spenders each year. They also estimate the expansion would create 2,300 new permanent jobs on-site and at other hospitality businesses, 1,600 jobs around the region from the economic activity generated, and around 6,000 jobs during construction.

Griffin says the project is also an opportunity to remake the pedestrian realm around the convention center. “I’m real interested in creating urban spaces downtown with walkable neighborhoods. … People want to come to Seattle cause it’s a cool city. The design is intended to celebrate the fact that the convention center is urban and you’re in the middle of the city.”

Sidewalks around the building would get seating and street trees and other elements to encourage conventioneers to walk around downtown rather than driving.

The expansion plan requires the convention center to purchase some public right-of-way including some above- and below-ground alleyways. Seattle regulation requires developers to not only pay market value for the land they’re purchasing, but provide a public benefits package that compensates the public for its loss of land.

Griffin did not provide a figure for the value of the proposed package. Alex Hudson of the Community Package Coalition says they put the WSCC’s benefits outline at around $20 million, nearly $57 million short of what they say would be appropriate for a project this large.

“They are proposing the single largest real estate project in the history of Seattle. It’s bigger than CenturyLink and Safeco fields put together. … They are asking for the vacation of 1.28 acres of public land. The benefits package isn’t asking them to go above and beyond. It’s asking them to do what’s fair and right,” Hudson says.

The coalition calculates that a $77 million benefits package value would be fitting based on other large construction projects in Seattle, including a proposed arena in the SoDo neighborhood that would require a street vacation. The SoDo project would cost about a third less than the WSCC expansion and offered $20 million to $25 million in public benefits.

“It’s really important that we understand that a project the size and scale of the Washington State Convention Center has impacts beyond just their site,” says Hudson. “We want to make sure these public benefits serve more than convention center visitors and workers, that they benefit the city as a whole.”

Community Package Coalition’s benefits proposal lists 11 projects, including improvements for several parks and promenades and bicycle infrastructure, a feasibility study for putting a lid over I-5, and affordable housing funding.

Griffin says the comparison to the SoDo arena isn’t fair because the arena asked for the city to give up an entire street and most of the convention center changes relate to alleys and underground. “It’s not about the whole project’s impact, it’s about the impact of the vacations. We’re vacating three alleys that don’t connect to the grid. At the end of the day, the city isn’t giving up the same thing as the street, which affects freight and the port and all those things.”

He continues, “The fact that those groups have interests in things for the community, I don’t mock their ideas at all. They’re legitimate ideas. It’s just a little apples and oranges.”

Hudson thinks her group and the WSCC have a similar vision for benefiting Seattle, just different definitions of commensurate scale. “When they talk about value of their project they talk about benefiting the city as a whole. The project states that as an explicit goal. We’re just seeking to help them fully actualize those goals.”

Whether the convention center will end up offering more for public benefits remains to be seen. The Seattle Design Commission is currently reviewing the project. If the Commission approves it, the project heads to City Council, which can vote to approve the alley vacations with the existing benefits package, or ask the developer to come back with a bigger offer. WSCC also needs approval from the King County Council to purchase a downtown bus station on which the new exhibit hall will be built.