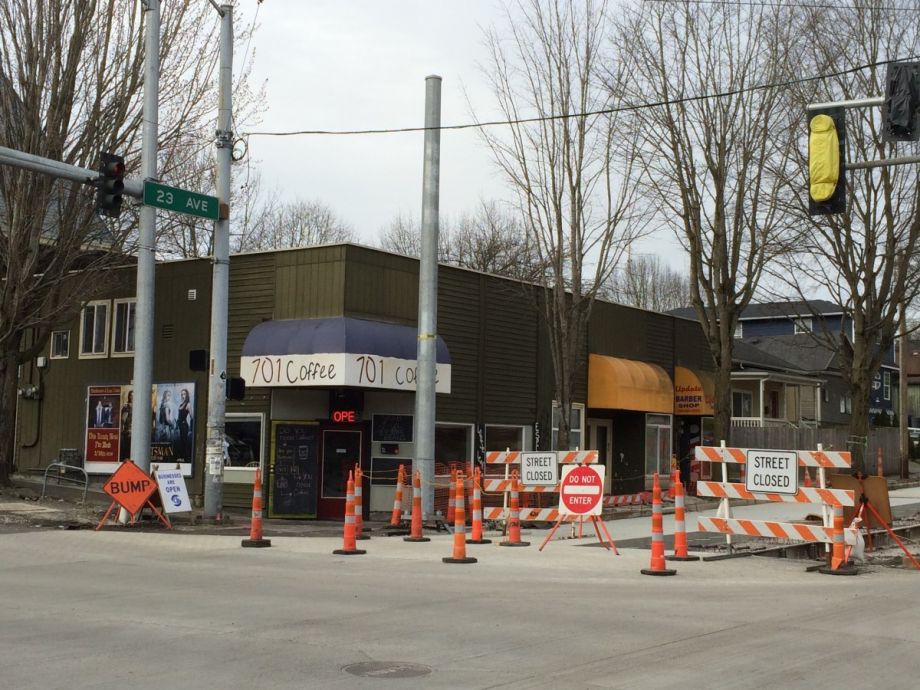 Small business owners have seen a drop in customers because of a complete streets project in Seattle.

When the Seattle Department of Transportation wraps up its 4.5-mile, $43 million complete streets project on 23rd Avenue through the heart of the Central District neighborhood, it will be a corridor transformed. The busy four-lane arterial is being repaved and reduced to two travel lanes and a turn lane, and getting new streetlights, widened sidewalks, new traffic signals for transit priority and a new water main. But at least one group of locals fears they won’t be around to see the upgrade by the time it’s completed next summer. A coalition of mostly minority-owned businesses along 23rd Avenue cites a major decline in customers, thanks to all the construction.

“My business is being bankrupt by an effective closure. I had 15 customers yesterday. Vehicle, bus and foot traffic is down to a trickle. This is a full taking. Sales are down 80 percent,” Sara Brereton said at a Feb. 16 city council briefing on the issue. Brereton owns 701 Coffee at the corner of 23rd and Cherry.

She continued, “23rd Avenue people of color-, transgender- and family-owned businesses are sending out an SOS to the council … our businesses are hanging on by a thread.”

It’s likely that every road project in the history of road projects has been met with grumblings from nearby residents and businesses over loss of parking and reduced revenue. SDOT typically offers marketing help and sets out “businesses are open” signs along projects and has done so with 23rd. But, in some ways this project is atypical.

For one, SDOT didn’t follow its own plan to phase construction. When it discovered it needed to redesign the light poles during phase one last summer, SDOT decided to push ahead with phase two rather than put the whole project on hold. As a result, there’s now just one lane of traffic and buses were rerouted around the bulk of the neighborhood’s business strip. Walking along 23rd, it’s easy to see why business would slow. The street is an unwelcoming mess of construction vehicles, materials, orange netting and cones. The asphalt has been ground off the single travel lane, while the rest of the road is down to dirt.

The Central District is Seattle’s historically African-American community. Impacted by pervasive redlining for much of the 20th century, it has followed a classic trajectory of many black and low-income neighborhoods in America. Decades of disinvestment gave way to new, wealthier residents who spurred gentrification and displacement. In the 1970s, 73 percent of the neighborhood was African-American. Today that number is less than 20 percent.

Brereton and a dozen other 23rd Avenue business owners were at the Feb. 16 council briefing to plead for direct financial compensation to keep them afloat. Prior to that, Mayor Ed Murray had committed additional money to help with marketing, but told the businesses the city does not pay mitigation money for construction projects as a matter of policy. The Washington State constitution explicitly prohibits local governments from gifting local tax dollars to private entities.

The one exception to Seattle’s no mitigation money policy is the ongoing waterfront tunnel project. Because businesses had to close down during construction (a process called a “full taking”), the city provided $15 million in mitigation.

Seattle’s policy is in keeping with other U.S. cities. In 2010, the University of Wisconsin-Milwaukee produced one of the few academic studies of city construction mitigation programs. Of the 33 surveyed, just two cities — Cedar Rapids and Kansas City — offered direct compensation to businesses during construction on a “case-by-case basis and only if the construction project included unexpected street closures or extended well beyond the scheduled end date.” Nine respondent cities offered low-interest loans to businesses during construction.

Central District business owners say the 23rd Avenue project might as well be a full taking. Nop Zay, owner of First Cup Cafe at 23rd and Union, broke into tears as she described her desperation at the council briefing: “This year is the worst year I’ve ever had. I’m drowning with four credit cards. I’m about to go bankrupt. … By my age, I couldn’t find no job. I’m 70 years old. You think somebody would hire me?”

Gerald Hankerson, president of the Seattle-King County NAACP, said he believes the city is intentionally driving out minority businesses.

“The city has orchestrated this plan, in my opinion, to gentrify this community,” Hankerson said. “The intention is for these businesses to be gone for the new CD to come into place … that’s part of this whole strategic plan.”

In response to mounting pressure from the community and the serious allegation from the NAACP, Murray relented on mitigation funds last week. The city has pulled together $400,000 from federal Community Development Block Grants and $250,000 from federal New Markets Tax Credits meant to support local development.

“I’ve gone to 23rd Ave. and inspected the project … it is obvious that the project is having serious impacts on those business,” Murray said at a press conference announcing the mitigation money. “It is obvious they need help.”

The city is still hashing out exact details, but according to its website, “the fund will be focused on assisting micro businesses that have struggled the most during the project, with an emphasis on low-income business owners and those in danger of displacement.” The Murray administration estimates 20 to 30 businesses may qualify for funds. In addition, the city will offer affected entrepreneurs the option to defer payment on utility bills, business permits, signage permits and the city portion of the business and occupation tax.

Murray was clear that this is not an ongoing fund for businesses impacted by construction. “We’re not going to get in a situation of giving limited transportation money to businesses simply because there’s a construction project going on,” he said.

But he did admit a need to better involve the community as the city moves forward on transportation investments. (Thanks to the recently passed $930 million Move Seattle Levy, the city has plans for many new transportation projects down the line.)

“Do you leave neighborhoods that are minority and economically depressed out of infrastructure improvements?” Murray asked rhetorically. “We need to do community development with community input.”

“It’s so critical that as growth is happening that we’re not erasing the history of racial segregation and also remembering the vibrancy of black community and economy that grew despite community disinvestment to make sure we’re not going to repeat that ugly history,” says Saldaña. “Communities that have been disinvested in must be engaged as we figure out how to develop in a fundamentally inclusive way.”