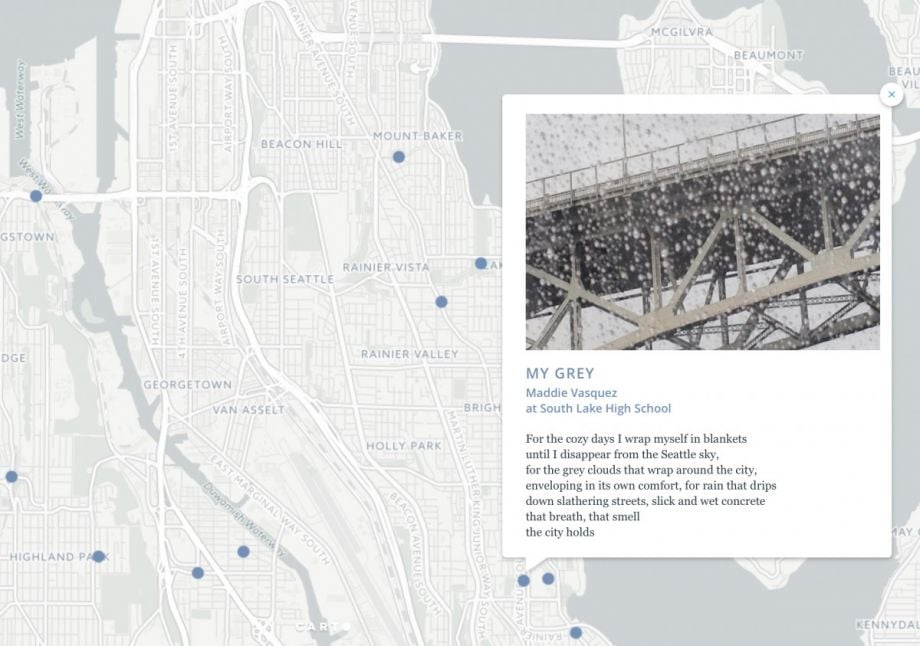 Claudia Castro Luna has spent her life thinking about the intersection of people and place and how each exerts influence on the other. Early in her career as an urban planner, she aimed to make people the center of her work. Then Castro Luna left planning for poetry and earned a Master of Fine Arts. Now, she’s wrapping up her two-year term as Seattle’s first civic poet. Her culminating project, the Poetic Grid, is an interactive map of Seattle plotted with place-based poetry.

“Poems give us a quick view into someone’s feelings or expectations or thoughts, especially when talking about place and people’s relationship to it,” says Castro Luna. “They’re not a dissertation about the proliferation of the tech industry in Seattle. They’re not going to do that for us. But together in this project written by a huge swath of people, we can learn something about ourselves.”

Castro Luna contributed several poems to the project and used poems from late Seattle luminaries Denise Levertov, Theodore Roethke and Richard Hugo. But the bulk of the poems are from amateurs and even first-time writers. As civic poet, Castro Luna created a residency program at library branches throughout the city and invited people to drop in and write poetry with her; some of the results are on the map. The only must to make the Poetic Grid: Poems had to be about a specific place.

The Grid captures a wide range of emotions about Seattle. There’s frustration, anger and heartbreak about displacement and change, homelessness, the tragic deaths of a cyclist and a pedestrian, and catcalling harassers. Jaqueline Ware’s “Starbucks at Rainier and Edmunds” is both an ode to the Starbucks that “took a risk” moving into the historically black Columbia City neighborhood long before it gentrified and a lament about the gentrifying shops and people that have since transformed the neighborhood and its residents.

There’s joy, celebration and satisfaction about the beauty of Seattle’s parks, of breakfast at the Fishermen’s Terminal, of fresh fruit from the fruit stand by Ballard High School. Seattle Youth Poet Laureate Lily Baumgart shares the whimsical legend of a giant squid that lives in the Volunteer Park Reservoir.

Some of the poems are in Spanish. One is in Japanese. As an immigrant from El Salvador, Castro Luna wanted to highlight immigrant voices and share their experience of the city as well. Though her time as civic poet is drawing to a close, she wants to continue reaching out to and working with immigrant communities in Seattle so that, “the map has true reflection of all of us. It’s not there yet in the dimension I want it to be. … We say we want all voices to be heard. It should be that way. But, that takes work and we have to be diligent about finding those voices and inviting those voices to the table.”

It is fairly common for a city to have a poet representative. There are at least 35 cities with poets laureate and nearly every state has one. Seattle’s civic poet position grew out of former City Councilor Nick Licata’s Poet Populist program. From 1999 to 2009, Seattleites voted to elect a poet representative. The program had no budget, however, and died off after a decade. Licata and Mayor Ed Murray revived it as the civic poet position in 2015, this time with a budget from the Office of Arts and Culture.

“We intentionally named it civic poet instead of poet laureate,” explains Calandra Childers, Office of Arts and Culture deputy director. “We wanted it to feel very accessible. It doesn’t have to be someone classically trained. … We think of them as a cultural ambassador and expect them to both reflect on the city and reflect back to the city.”

In addition to the larger projects, the civic poet writes poems for certain city events such as the Mayor’s Arts Awards, performs readings, and serves as the city’s representative in different literary communities.

When Castro Luna learned of the position, she knew right away that she wanted to use it as a way to explore Seattle through the people who make the city.

“We each carry a map of the city that’s different from each other’s maps because we each have a different relationship to the place we live,” she says. “And we love it or hate it or change it in a particular way. So the city lives in us and we live in the city and we exert change by our living here.”