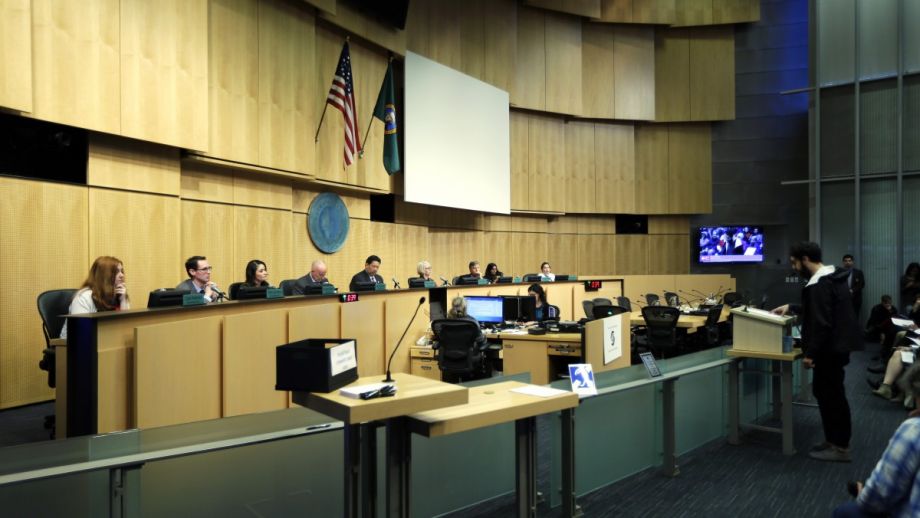 It’s been a wild few weeks in Seattle politics. On Sept. 13, Mayor Ed Murray resigned — a day after news broke that a fifth man had accused Murray of sexually abusing him as a child. Per the city charter, City Council President Bruce Harrell was sworn in as temporary mayor and given five days to decide if he would stay in the position until a new mayor is elected in November. Harrell declined, and the council appointed Council Member Tim Burgess to serve as acting mayor effective Sept. 18.

Now, the council is on the hunt for an appointee to fill Burgess’ seat until January when a newly elected District 8 council member takes office. (Burgess had already announced plans to step down at the end of his current term so his replacement will come from November’s general election.) The process is oddly similar to what happens when there’s any job opening.

Anyone interested in being a temporary council member submitted a cover letter, resume and references by Sunday, Oct. 1. The only stipulations: Candidates must be U.S. citizens and registered Seattle voters.

With applications in hand, the council will be reviewing those who want the job this week. On Tuesday, there will be a community forum at which the public can meet and ask questions of applicants. The following day, the council will hold a full session to give applicants time to make the case for themselves and give the public time for on-the-record comments. On Thursday, there will be one more council session, and on Friday, council will appoint their temporary colleague.

Seattle’s city charter is vague on the process for filling council vacancies. It only establishes a deadline for filling the seat and requires five votes for appointment.

“The process is really sort of inconsistent,” says Nick Licata, a former council member who has applied to fill Burgess’ seat. “I’ve been through four or five of these things as a council member and a candidate. I think this process has been as open as any in the past.”

A coalition of community groups called Transparent Seattle deserves credit for that openness. They argued that a job as important as city council deserves as much public input as possible, especially since the appointee will weigh in on the 2018 city budget. They lobbied for the open forum and the on-the-record council meeting the following evening.

Though they got the forum and the council meeting added to the process, Transparent Seattle organizers are still concerned that the city councilors are only paying lip service to openness. Organizers didn’t respond to requests for comment for this article, but organizer Dae Shik Kim Hawkins took to Twitter to voice frustrations over the report that five of the eight council members would not attend Tuesday’s community forum.

“What’s the point of democracy if elected officials tasked to represent communities best interest aren’t even there to gauge community need?” he wrote.

Seattle’s steps toward a more open process for filling city council vacancy is not entirely unique. Chicago’s charter gives the mayor authority to appoint an alderman in a closed process to fill a vacant seat. But in 2010, former Mayor Richard Daley responded to demands for transparency and held an open application process to replace an alderman.

There is very little consistency on procedure from city to city in the U.S. San Francisco also leaves council appointments up to the mayor. In Philadelphia, council vacancies are filled by special election. In Los Angeles, the city council president has the authority to appoint replacements when there are vacancies. This led to a spectacularly odd situation last year in which Council President Herb Wesson appointed himself to fill the seat opened when a colleague retired 10 months early to take a job as a lobbyist. In a move he said was about saving taxpayer money, Wesson represented two districts, but took only one council member salary for the work.

Licata is chipper about how Seattle’s council will do in the coming months.

“The council will be fine quite honestly whether I get on or someone else,” he says.

He does, however, hope they spend the time to codify their process to make it official for the next time a council seat vacates. “Whatever they come up with,” he says, “it’s important to say ‘this is the system we propose to use.’ If they want it to last, they need to formalize it with legislation.”