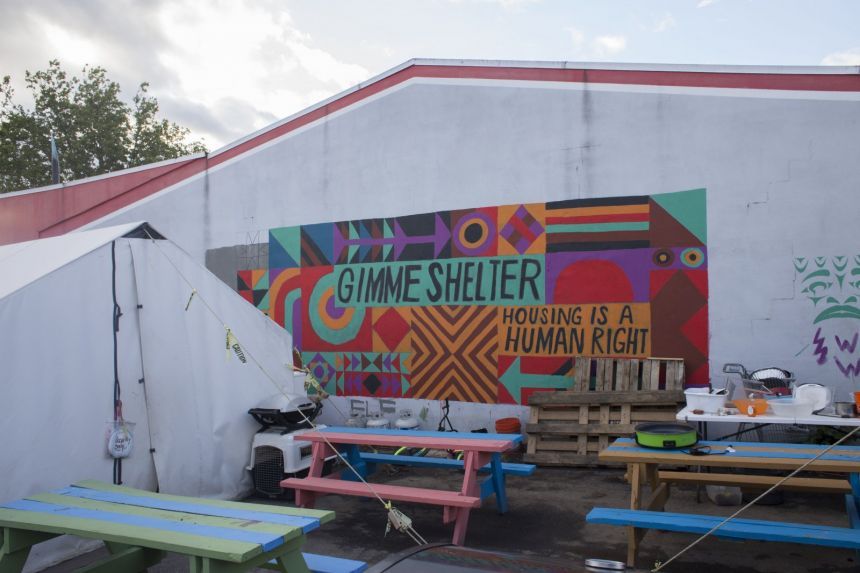 A mural at Seattle's city-sanctioned Othello Village, a homeless encampment with tents and tiny houses (Photo by Jen Kinney)

Seattle is experiencing a homelessness crisis. The 2016 One Night Count — an annual tally of the number of people living without shelter in Seattle and surrounding areas — totaled 4,505. That’s up 19 percent from 2015’s count of 3,772 people, which was itself 21 percent higher than 2014’s number. That population growth has led to an increase of unsanctioned encampments under highway overpasses, parks, green spaces, and just about anywhere someone can fit a tent or tarp. It’s an inevitable outcome for people who can’t or don’t want to find space in shelters or city-sanctioned tent cities.

Encampments, even unsanctioned ones, provide a greater semblance of stability than finding a new place to sleep each night (which is part of the reason a group of homeless advocates proposed legislation this week to limit the city’s ability to remove encampments). And while some stability is better than none, many encampment residents are still left with the question of where to access the basics: bathrooms, water, a place to charge electronics and so on. Devin Silvernail is turning to businesses in Seattle to help provide an answer.

Silvernail is founder and director of Be:Seattle, an advocacy organization for low-income and homeless residents. His goal is to get local businesses to sign The Pledge and make their facilities available to homeless people.

When a business signs up they decide what they’re comfortable offering and advertise it with Pledge stickers posted on their door or window. In turn, the business gets added to a map Silvernail hands out to people on the street and gives to service providers.

Since its launch in June, 12 businesses have signed The Pledge. (One cafe pulled out of the program after a few weeks of participating.) Silvernail got the idea while working as a political organizer in San Francisco.

“I was working with a candidate running for mayor. One of the things he wanted to do if elected was provide incentives to businesses to open up restrooms to people,” he explains.

After moving back to Seattle this year, Silvernail tried to start a similar campaign to get business to allow public bathroom access, without much success. Around the same time he learned about the Le Carillon in Paris, a program using the sticker system since November, and decided to emulate it.

“As soon as I gave people the choice to do what they wanted to do, that’s when it really took off,” Silvernail says.

For those unwilling to sign up, Silvernail sees an issue of stereotypes.

Peloton, a bike shop and cafe in Seattle’s Central District neighborhood, is one of The Pledge’s early adopters and is offering people a place to charge their phones, get a glass of water and use the bathroom. Co-owner Aaron Grant says they signed up after Silvernail explained the program because, “it just makes sense. It’s not much effort on our part, but it could make a difference for someone.”

He said he and his co-owners had some concerns at first. “We’re trying to run a business and don’t want to have people hanging out all day drinking water and charging phones. But it’s not really about that. It’s about the community.”

And part of Silvernail’s goal is exactly that. “The Pledge is a way to help homeless people in the community remember they’re still part of the community. Part of it is breaking down those stereotypes that homeless people are aggressive or drug addicts, helping people realize they’re everyday people.”

For now, Silvernail is aiming to get 20 to 30 businesses on board by the end of the year. In the long term, Silvernail wants to see a cultural shift.

“Three years down the road I want people to see The Pledge sign and think ‘that’s awesome’ and stand in line with a homeless person and think it’s totally fine cause that’s their neighbor.”

He also hopes the idea might spread to other cities. “It took about $200 to start up and get the first batch of stickers and maps and stuff. I would say for anyone who wants to get this started [in their own city] it doesn’t take that much.”