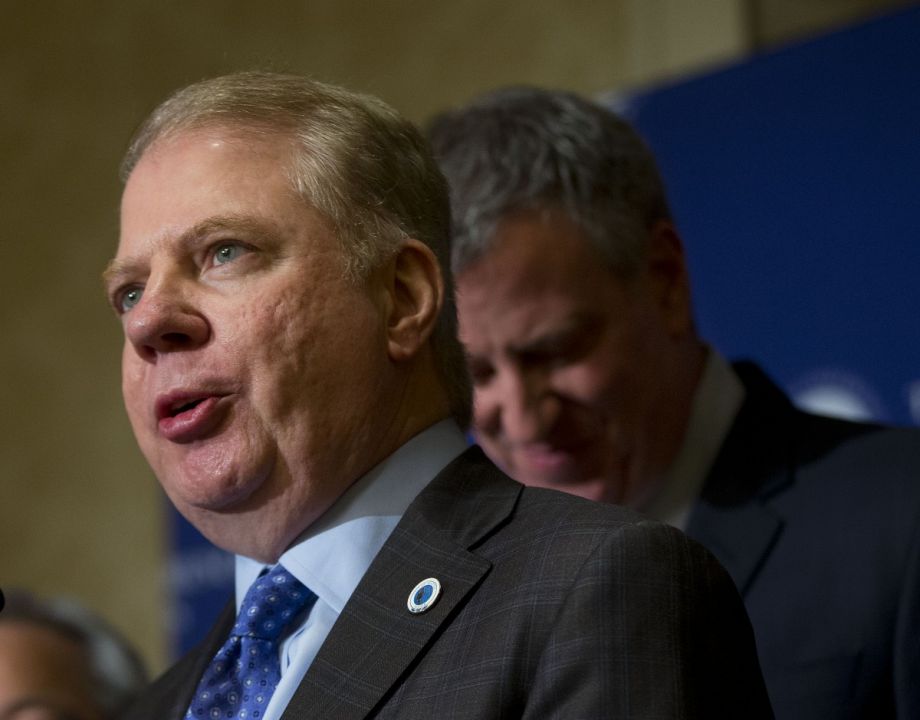 “My vision is a vision where the people who work in Seattle can afford to live in Seattle,” said Seattle Mayor Ed Murray. (AP Photo/Pablo Martinez Monsivais)

For Seattle to remain affordable, the city will have to grow taller and denser, says Mayor Ed Murray’s task force on housing affordability. After 10 months of deliberation, the panel of developers and affordable housing advocates have put forth 65 proposals that would halt the city’s rapid transformation into a place “accessible only to the affluent and privileged.” Their goal: 20,000 affordable housing units in the next decade, and at least 50,000 new housing units overall.

“My vision is a vision where the people who work in Seattle can afford to live in Seattle,” Murray said at a press conference Monday. “Without this plan, people will continue to be forced to live outside this city. We will continue to have a city of economic apartheid.”

At the heart of the recommendations, released Monday, is what Murray is calling “the grand bargain.” Residential developers will be allowed to build taller in newly developed “upzones,” in return for either building affordable housing units in their projects or paying into a fund for the city to build them. Commercial developers will pay a linkage fee based on square footage to fund affordable housing. (The report comes at the same time that Boston Mayor Marty Walsh is examining how his city’s affordable housing policies may or may not be helping with high rent.)

This proposal tones down a plan for a full-scale linkage fee proposed last year by Council Member Mike O’Brien. When the council unanimously approved the principle of a per-square-foot fee levied on all new construction, developers filed two separate lawsuits. Therein lies the bargain: O’Brien is shelving the strong linkage fee proposal so long as developers agree to and uphold the new accord, with its moderate linkage fee for commercial development and mandatory inclusionary zoning on new multi-family and mixed-use developments. O’Brien told the Stranger, “If everyone stays arms and arms, then the linkage fee bill stays in the drawer. But if the coalition falls apart, then that linkage fee bill is there and ready.”

Under the more modest proposal, residential projects taking advantage of upzones will be permitted an extra one or two stories and they will need to make 5 to 7 percent of their units affordable to households with incomes at or below 60 percent of area median income. In Seattle, that’s $54,000 per year for a family of four.

The upzones mostly encompass areas of the city with already significant density, including the downtown area and designated urban villages. However about 6 percent of single-family zoned neighborhoods, those adjacent to denser urban villages, will be upzoned as well.

The status of Seattle’s iconic single-family neighborhoods became a contentious flashpoint last week when the Seattle Times leaked a draft of the recommendations that suggested the “single family” designation would be eliminated altogether. “The historic level of single-family zoning is no longer realistic or sustainable,” the draft stated. Murray has also said that Seattle’s preponderance of single-family neighborhoods — which currently make up 65 percent of zoning — has historically been linked to racial and economic segregation.

But the final proposal didn’t do away with them. Instead, it recommends that the 94 percent of single-family neighborhoods not being upzoned become denser by allowing more types of small-scale multi-family housing, including duplexes, triplexes and backyard cottages.

Among the 28-member committee’s other suggestions were tax breaks for landlords who agree to restrict rents at existing properties, support for land trusts that preserve permanent affordability, easier housing access for people with criminal records, reduced parking quotas for residential development and doubling the size of Seattle’s current housing levy in 2016.

The committee estimates that meeting their target number of affordable housing units will cost $3 billion over the next 10 years.

All policies must be approved by the council before implementation. Five of the nine council members stood with the Mayor at the news conference Monday, but three members, despite the proposal’s ambitious scope, say the recommendations are too weak.

“It goes nowhere near far enough to address the scale of the problem that we’re facing,” Council Member Kshama Sawant told the Stranger. According to the city (and this handy infographic by Council Member O’Brien), 38 percent of Seattle households spend more than a third of their income on housing and 17 percent spend more than half.

Sawant and Council Member Nick Licata are backing an alternative proposal by council candidate Jonathan Grant, which includes the citywide linkage fee that O’Brien took off the table, set at its maximum level. They also call for repealing the state ban on rent control. Grant, who held his own press conference Monday, says his plan would collect roughly $500 million more in fees from developers to fund affordable housing over the next decade.

Beyond individual recommendations, Grant and Licata take issue with the pace of the housing affordability committee’s proposal. No resolution is required under the proposal until 2017. “You’re two years off before you can even do an action plan,” Licata told the Stranger.