If You Love Blueberries, You’ll Love These 9-Foot-Tall Sculptures in St. Paul – Next City

If You Love Blueberries, You’ll Love These 9-Foot-Tall Sculptures in St. Paul 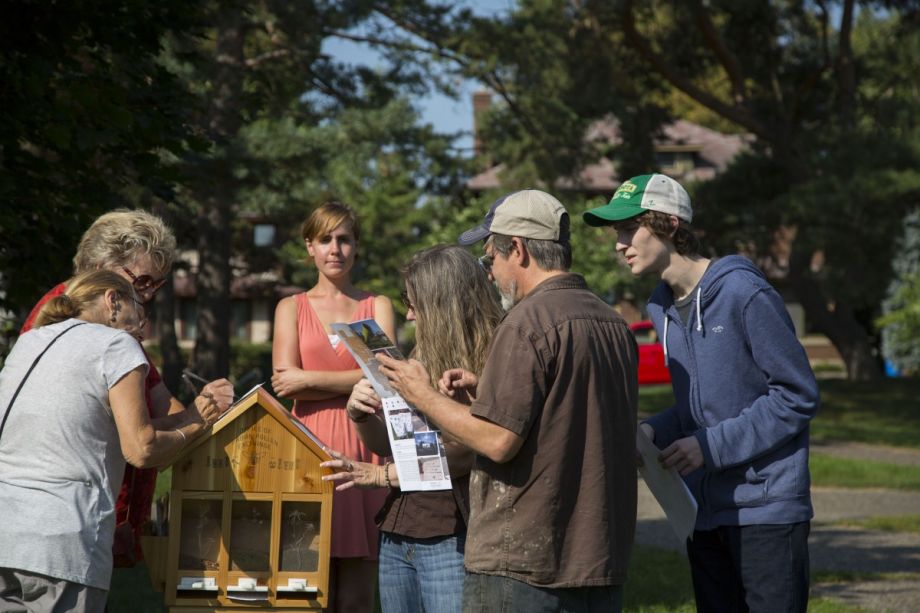 When we think of bee habitats, we usually think of hives. But that’s just where honey bees live. There are over 400 types of native, solitary bees in Minnesota alone that nest in the ground, or in debris like broken plant stems. In cities, where broken plant stems are seen as debris and cleared out, there are fewer homes for native bees.

Artist Christine Baeumler says that while the new bee habitats likely won’t provide homes for all the bees that need them, she hopes they’ll serve as lightning rods to draw awareness to the issue of bee loss.

“Unless we change our larger landscaping practices, this is just a Band-Aid,” she says. But Baeumler, who says she has done a lot of collaboration with scientists, is committed to a functional art project, not just a symbolic one. And if that comes in the form of education, that works for her.

“There is a lot of attention to honeybees, and it’s important,” says Baeumler. “And people understanding the decline is important. But as an environmental artist, I work on restoring urban ecosystems. To have diverse and native ecosystems in our landscapes we really need those native bees as well.”

Honey bees are technically an invasive species, brought in from Europe and Asia. We rely on them to pollinate monocultures — corn, soy — because they are particularly effective at doing so. But native nesting bees have the unique ability to pollinate certain foods that they have evolved alongside, like blueberries and tomatoes. Studies have found that in the Midwest, over 50 percent of native bee species have disappeared.

“Minnesotans care about bees,” says Erin Rupp, founder and executive director of Pollinate Minnesota, an education and advocacy organization. Her group led efforts to push Governor Mark Dayton to pass an executive order last August requiring various agencies to prioritize pollinator protection, including the Department of Natural Resources. Around the same time, the Minnesota Department of Agriculture released a report, which found that neonicotinoids applied to plant seeds to prevent pests are one of the most lethal culprits in bee decline. But because the pesticides are applied in the form of a seed coating that comes pre-applied before planting, they don’t technically count as pesticides and therefore can’t be tracked or measured properly, let alone regulated. The MDA sought legislative approval to track these seed coatings the way that pesticides are already tracked, but the measure did not pass during the last session.

“It’s hard to be a bee right now,” says Rupp. “It’s also hard to be a farmer.” Rupp says her group is investigating ways that farmers could insure strong corn yields without using neonicotinoids, which studies have found may not in fact increase yields, or deter pests that feast on soy, one of the largest monocultures growing in Minnesota.

Baeumler says for individuals, even if you’re trying to be responsible and conscious of pollinators, it can be hard.

“You go to Home Depot and buy a plant that says, “pollinator friendly” and then find out it has neonicotinoids in it. I was doing that!” she says.

Still, Minnesota has more pollinator-friendly communities than any other state. Twenty-six municipalities have adopted resolutions around avoiding the use of neonicotinoids and aiming to preserve food sources like flowers for all bees, and habitats for native bees.

Because of this attitude toward pollinator protection, Bee Real Bee Everywhere has gotten a lot of support from the parks and the public works department. And they have received funding from the city alongside the Knight Foundation.

Once all the sculptures are up, says Baeumler, her team will analyze how they’re doing and what’s living there. From there, they’ll figure out what to do next, whether that’s installing more, smaller habitats in private lawns, or ramping up their education and awareness efforts.