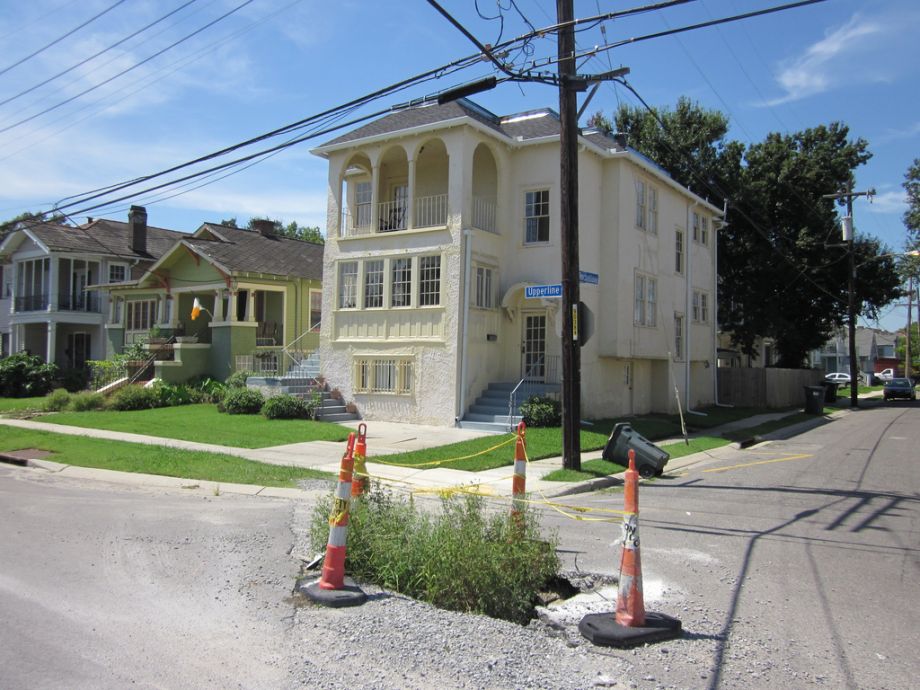 A pothole in New Orleans — one of many. Photo credit: Infrogmation of New Orleans via Flickr

In his house of 40 years, located about eight blocks from the Mississippi River levee, Lee Hulbert, 59, stands on relatively high ground in New Orleans. But in 2005, a breached Industrial Canal levee sent several feet of brackish floodwater into his stretch of Marais Street in the Upper 9th Ward.

“All that saltwater came in and it sat here, putting its weight onto this street and eating away at this asphalt. And this is the result,” Hulbert said, pointing at the pockmarked surface at his feet.

Hulbert gestured toward a nearby intersection, at a deep pothole, big enough to swallow a car tire, and a manhole that protruded several inches above the pavement. “The waters caused that too,” he said, “because they washed the base from under the street. It’s to the point where we damn near need to drive on the sidewalk around here because the streets are so bad.”

Road repairs were delayed after Hurricane Katrina because the city had to bring back basic services and get people home. So nine years after the storm, the city is still in negotiations with the Federal Emergency Management Agency, in part because FEMA will only pay for damage caused by a disaster, and nothing else. This means sussing out exactly which damage was caused by Katrina a decade ago — something that’s not so hard to do in the case of a building, but pretty daunting when you’re talking about streets. Figuring out which specific potholes were caused by Katrina’s floodwaters, as opposed to garden variety wear-and-tear, is a formidable task. Even trained engineers standing on a roadbed may not be able to tell how how much of the base washed away or how many subterranean pipes were corroded open by saltwater.

In recent months, city-contracted engineers have begun a comprehensive, scientific analysis of these roads and road beds, hoping to more precisely determine how much damage they sustained and how that damage occurred. Thomas “Mike” Womack, director of FEMA’s Louisiana Recovery Office, described core sampling, analysis of inundation levels and cameras snaking through pipes as part of an approach that he says is brand new. “I’m not aware of anyone using this very scientific sampling of roads and substructure to try and validate storm damage,” he said.

If such efforts are successful in New Orleans, other Katrina-affected cities could follow suit. “If the city of New Orleans can bring this claim, using scientific methodology, how would we deny a claim to Biloxi or Gulfport or other cities on the Gulf Coast that had higher surge levels, though the water didn’t stay on the ground as long as it did in New Orleans?” asked Womack.

In 2005, 80 percent of New Orleans flooded, affecting much of the city’s 1,652-mile network of streets. Heavy trucks and demolition machinery further ruined pavement, exacerbating damage. To this day, the city is dotted with orange cones and road crews, making much-needed repairs. But still the negotiations continue, because FEMA is charged with bringing damaged public infrastructure and buildings back to their “pre-existing” state. In New Orleans, that means bringing the city back to the way it looked the day before Katrina struck. It’s like an insurance company trying to decide which of a patient’s illnesses were pre-existing and won’t be covered.

FEMA has set a threshold for public buildings. If they are 50 percent damaged, the agency will pay to demolish and replace it. But there’s no similar threshold for roads.

On Marais Street, for instance, FEMA will pay for repairs to only part of Hulbert’s block as part of its Recovery Roads Program. Each of the city’s 72 neighborhoods requires dozens of pages of documentation, listing thousands of spots where the roads are pitted, buckled or cracked in a way that teams of FEMA, state and city experts agree was caused by the disaster. On Hulbert’s street, a 15-by-19-foot section denoted by the address of his house will be re-paved with 5.5 inches of asphalt. Two slightly larger sections are also slated for repaving, but altogether the repairs will cover only about 20 percent of his street.

Hulbert shook his head. “Why patch?” he asked. “It’d be cheaper to do the whole block. That’s just common sense.”

His feelings are shared at City Hall, where Deputy Mayor Cedric Grant’s teams must create crazy-quilt drawings, cobbling together FEMA-funded portions of new asphalt with portions of existing street that were judged to be non-damaged.

The city drawings are shaded with a rainbow of colors, showing FEMA-eligible damage, damage that is anticipated to be eligible, pavement that sits over broken pipes owned by a separate agency (the Sewerage and Water Board), and ramps required by American with Disabilities Act. Since each color is attached to a different funding stream, contractors working on streets typically have to submit seven different invoices to get paid. “If we were doing a regular paving program, there’s no way we’d do it this way,” Grant said.

But Womack said that patchwork is longstanding practice for most urban areas. “Don’t you see that in every city?” he said. “If a waterline has to be replaced that takes up one-third of a road, you don’t automatically replace the whole road.” That said, he doesn’t blame the city for trying to identify more damages. He and his staff now work closely with Grant’s staff, having met with them several hundred times since Grant’s boss, Mayor Mitch Landrieu, took office in 2010. Since that time, the Recovery Roads total has grown from $40 million to more than $280 million.

The work being done with FEMA in New Orleans goes far beyond paving local roads, said Grant, who believes that they are establishing new procedures that will prove invaluable to other disaster-struck cities. “We are breaking new ground, literally,” he said.