The Science of Building Better Bridges – Next City

The Science of Building Better Bridges 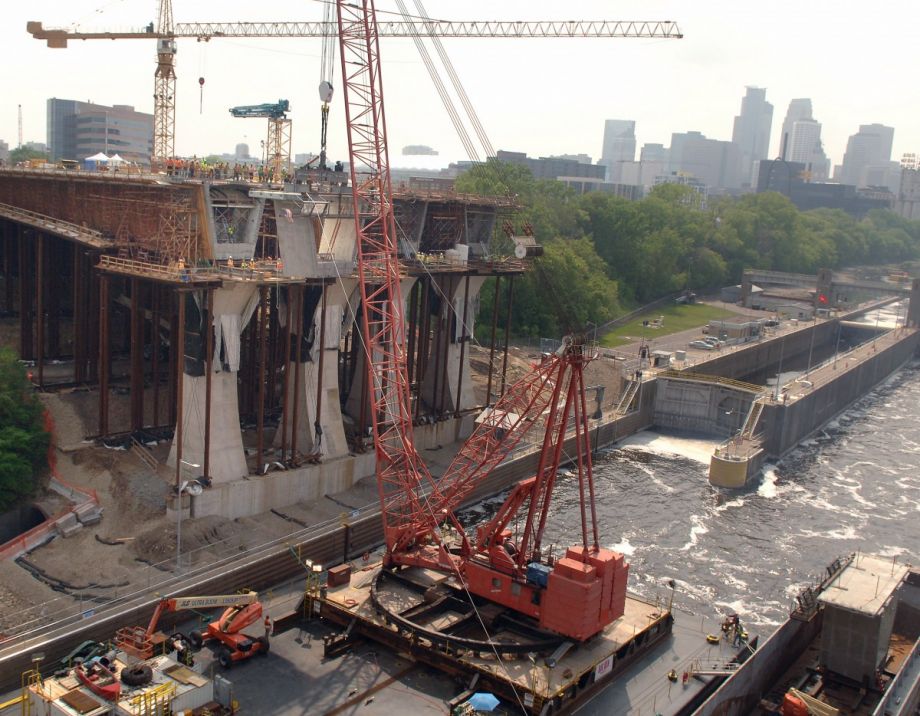 When Minneapolis’ I-35W Mississippi River bridge collapsed on April 1, 2007, 13 people were killed and 145 were injured. The failure of the busy eight-lane steel structure called attention to the poor state of our national infrastructure — but many U.S. bridges continue to decline. According to the National Bridge Inventory, which is compiled by the Federal Highway Administration, 25 percent of all bridges in the country are in need of significant repair.

Atorod Azizinamini is really, really good at fixing bridges. And given the current state of bridges, this makes him something of a national hero. He has dedicated almost his entire career to studying and developing solutions for aging bridges. Last October, the Florida International University College of Engineering and Computing professor was named one of the White House Champions of Change honorees for his work in the field.

He literally wrote the (first and only) book on enhancing the service life of bridges. His ideas have been incorporated into plans for the Tappan Zee Bridge, and are now changing how new bridges are built around the country. One of his most notable achievements is creating a system that allows for the replacing and retrofitting of bridges — without closing traffic. It’s called accelerated bridge construction (ABC), and it involves most construction taking place offsite, transportation of giant bridge pieces to bridge sites and then assembly on site. (“It’s kind of like Legos,” Azizinamini explains.)

“Bridges appear to be simple structures,” says Azizinamini, “but they have lots of interesting problems.” The problems begin, he says, with how we’ve historically thought about building them. We built our bridges like we built our buildings: for strength (and not necessarily for durability). “We already have 600,000 bridges that were not designed to last,” he continues, “and that problem will be with us for years for to come.”

Azizinamini asserts that it’s OK to think about buildings in terms of strength because “most of a building is not exposed to the elements. But bridges are all exposed.” Corrosive salt from saltwater and the salt we use on wintery roads cause many of the problems common in aging bridges, such as rust and cracking. Steel also fractures naturally under repeated stress. “Between 1970 and 2000 [in the U.S.], the amount of traffic and weight on bridges increased several times,” he says.

Azizinamini sees expansion joints as one of the biggest trouble spots. Because bridge materials expand and contract with temperature changes, bridges were often built with expanding joints that went over the supports at the ends of bridges. But these joints turned out to be an Achilles’ heel. They’re often conduits for saltwater to seep into structural elements. They collect debris, and also can freeze and lock up during winters. They have a “low service life,” Azizinamini explains, “most last less than five years and few last more than 20.” Perhaps the worst thing about them is that they are proprietary elements, so whoever owns the bridge is responsible for maintaining and replacing them — both a complicated and expensive process. As a result, they simply don’t get changed out often enough.

Enter Azizinamini’s focus on fixing bridges more easily (with more sustainable solutions to boot). Entire girders and decks can be swapped out for new in less than two days, he says.

His most revolutionary bridge-magic trick is called “folded plate technology.” Here’s how it works: Take one giant flat steel sheet and bend it to a certain shape to create the girders (aka the beams of the bridge). The technology is limited to serving bridges of 60 feet and smaller — the size, Azizinamini points out, of most of our bridges in need — because the giant pieces of steel are fabricated with something called a steel press brake and the biggest sized ones that exist are only up to sixty feet. The logic behind why it needs to be one piece is pretty simple: You get a giant piece of steel that doesn’t have fatigue-prone joining points. You don’t have to bolt pieces together. The more a bridge is made of one piece, the less likely stress cracking becomes. Also, these giant steel girders are then connected to middle supports using concrete instead of bolts, which protects it from corrosion.

For bridges more than 60 feet, Azizinamini has another method with a somewhat poetic name: simple for dead load and continuous for live loads (SDCL). The dead weight is the weight of the bridge itself. The live loads are the traffic that the bridge will eventually sustain. SDCL creates a dual system that supports both. The first system is the simple one. It’s the girders supported at their middles and ends. Acting as separate units, they support the weight of the bridge itself. “But when you cast the deck,” he says quite happily, “the concrete hardens and turns the whole bridge into one single piece that carries live loads as a continuous system.” So a single structure is supporting weight in two ways simultaneously.

Azizinamini is excited about the evolving quality of corrosion-resistant, flexible steel and denser, stronger concrete. But he knows that with better materials will come design challenges. “The shapes of the bridges we have are suited for the old materials,” Azizinamini says. “The shapes of our brides will have to change. Shapes of future bridges will optimize the best characteristics of the new materials. What that will be remains a question.”