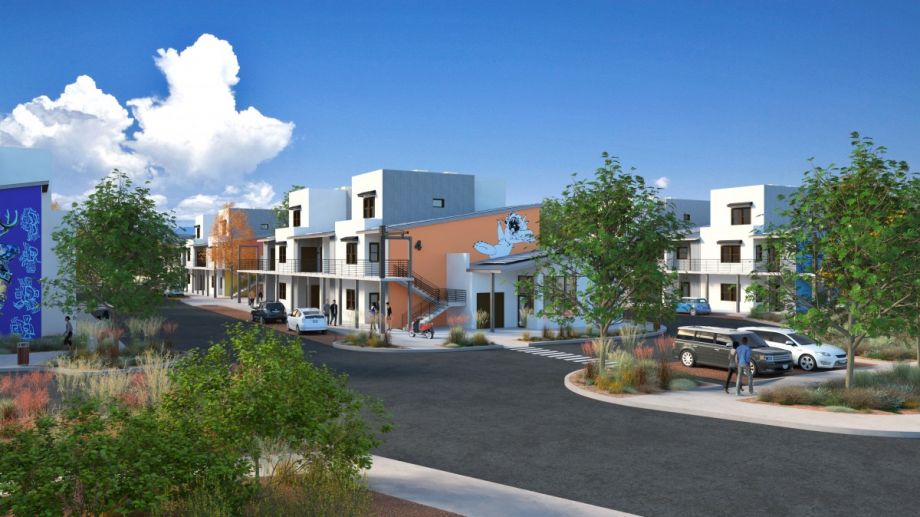 In the early days of 2019, a proposal for affordable artist housing in Santa Fe, New Mexico, went before the City Council—again.

At the meeting, the city of Santa Fe re-committed $2.1 million (which included land valued at $1.3 million) for the $16.3 million, 65-unit project on the former site of the city’s sewage treatment plant. It was a good sign proceeding the project’s third application to the New Mexico Mortgage Finance Authority, which previously declined to offer tax credits to the project.

“I’m glad you are going forward with this again,” City Councilor Chris Rivera told Daniel Werwath, the project’s lead developer, at the meeting. “I think this is going to be our year.”

Werwath also hopes 2019 will be the year his passion project, known as the Siler Yard: Arts+Creativity Center, will finally come to fruition. Werwath is chief operating officer of New Mexico Inter-Faith Housing, as well as an artist, so he knows more than most about the importance of affordable housing for artists.

He also might know more than most about the difficulties in building it: he first proposed affordable artist housing for Santa Fe in 2005.

“From my own experience as an artist and craftsman, the obstacles to low-cost working space in Santa Fe are huge,” he says. “We don’t have a big, abandoned warehouse district, and houses here are small.”

His idea found community and city support but in the process of negotiating land, the economic downturn hit and put an end to the plan. Then, in 2011, the nonprofit Creative Santa Fe kickstarted its own process to build affordable artist housing, and Werwath eventually joined the team.

Creative Santa Fe took on the challenge after their own outreach revealed a growing need for affordable housing. “We found our young creative people were leaving because there was not enough,” says Cyndi Conn, the group’s executive director.

Four years ago, the city and Creative Santa Fe released a request for proposals to secure a local developer, bringing Werwath on board. That was followed with a search for a locally led design collaborative.

As the team came together, funding remained a challenge. “The last couple years have just been totally wild in tax credit development,” Werwath says. “The tax law changes have upended that funding source, while tariffs and other things going on are drastically increasing construction costs.”

“We have been fighting,” Werwath says, “to fit this very non-conventional project into very conventional funding sources.”

The obstacles are significant. The state tax credit program selection criteria awards more points to projects using less subsidy. Since the Arts+Creativity Center would be in a high-cost area, it is at a disadvantage.

The ambitious design also brought up costs. A grant from the National Endowment for the Arts allowed the team to carry out an intensive, inclusive engagement process including all stripes of Santa Fe creatives, from a rock musician to Native American ceramicist to lowrider car artist.

“We started looking at how to re-invent live/work housing,” says Shawn Evans, one of the project architects. The collaborative came up with a transformative proposal for the former sewage treatment plant, with eight residential buildings rising two or three stories with a range of bedroom configurations.

Every home features high ceilings and an attached work studio. Large windows lining community rooms look out to a centralized “spine” which connects a plaza and playgrounds. A shared resource center will be part makerspace and part workforce development.

“The design reflects what [the team] was hearing from people,” says Alexandra Ladd, director of Santa Fe’s Office of Affordable Housing. “But we’ve had councilors concerned that if there’s public investment, the dollars should be stretched as far as they can possibly go.”

At the January City Council meeting, tensions arose when a counselor questioned what he felt was a high subsidy for just 65 units. Ladd wanted to get away from the notion that “you can make each unit less expensive [by building] more units,” she said at the time, adding that “we are taking big steps away from the idea that you warehouse poor people.”

As the city and state weighed in on subsidies, the Arts+Creativity Center team got increasingly creative in securing funding. Energy efficiency was an early priority, but the tax credit program stopped offering points for green building, Werwath says.

But as the cost of solar dropped, the team took a second look at building sustainability last year. The future energy savings would significantly reduce operational costs, they found. To help offset the cost of installation and lower their need for subsidy, they pitched a fundraising campaign to locals.

“There was a huge response to building affordable housing and climate change intervention,” Werwath says. In two months they raised over $350,000.

The tax credit application is due this month and the team will know if they receive funding by May. “If we get that funding commitment, we’ll be under construction around this time next year,” Werwath says.

Conn believes this project can be a prototype for tackling Santa Fe’s affordable housing need in more creative ways. According to the city’s Office of Affordable Housing, Santa Fe’s market lacks at least 2,400 units to serve renters earning less than 50 percent of the area median income.

The goal, however, should be facilitating projects at a faster pace, Conn says. “We still need to figure out a lot of other ways to build affordable housing in our city short term,” she adds. “If it takes eight years to build 65 units, we’re never going to solve the problem.”

Tags: affordable housing, climate change, architecture, for whom by whom