How Sand Became One of Phnom Penh’s Hottest Commodities 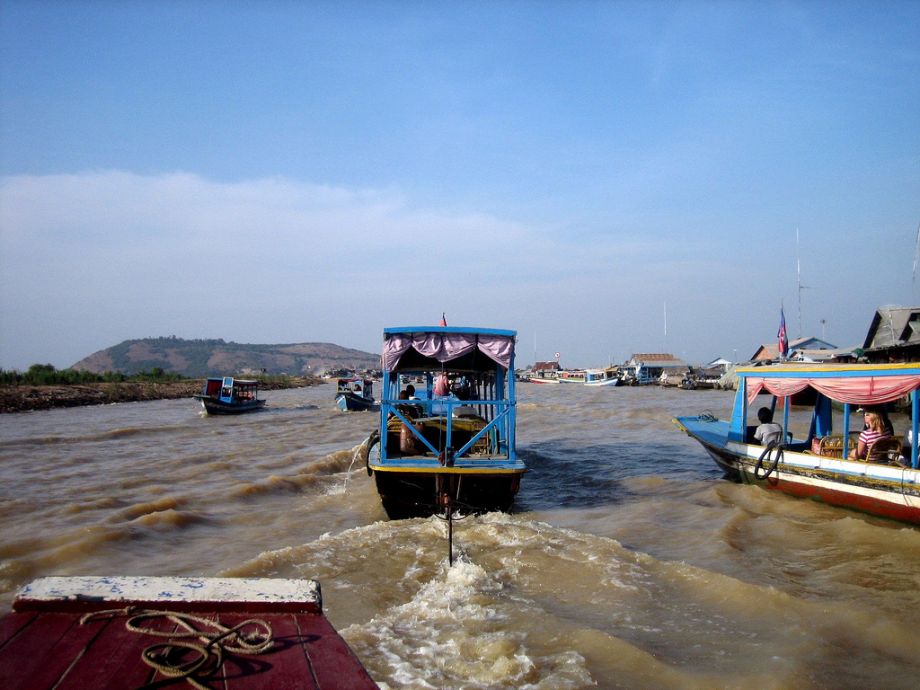 Sand from the Tonle Sap River is worth millions of dollars, and even more overseas. (Photo by Prince Roy via Flickr)

The 200 families with homes next to the Tonle Sap River in Phnom Penh’s Deum Kor village live in front of what looks like a man-made beach. On one side of the main road cutting through Deum Kor, there is the riverside part of the community, with houses, shops and boats. On the other side of the road, there is nothing but a vast expanse of sand.

Phnom Penh’s construction frenzy is fueling the need for sand dredging, the practice of sucking up debris from riverbeds. The sand is normally used to clear waterways and to provide material for development projects. According to the Cambodian government, between 15,000 to 20,000 cubic meters of sand per day is needed in Phnom Penh to sustain the city’s building boom. Sand dredging, which in Khmer translates to “getting the sand out of the water,” is a common practice around the world. But for many here, it’s a symbol of what ails the city: shoddy urban planning and a Wild West approach to development.

Once dredged, the sand has to go somewhere. Deum Kor, like other riverside communities, is one of the places it gets dumped. After getting the sand out of the water, workers pile it onto floating barges, then haul it to the banks. Aided by water, the sand then sluices through tubes that extend up onto the land. It eventually winds up on construction sites. The sand becomes the groundwork for apartment buildings and developments that will forever change the landscape of Deum Kor, where residents can still point to the oldest house in the village, as if highlighting its unique connection to an irretrievable past.

“Before, we planted rice to eat by ourselves,” says Hun Yub, a 65-year-old woman with several relatives in the village. “But now, our villagers work as construction workers to get money to buy rice and vegetables.” Sitting on the steps of her wooden house, built on stilts to avoid flooding, she laughs at the irony.

A former soldier who declines to give his name says the dredging operations started up a few years ago. His two sons work as security guards for a construction firm that uses the sand. Now they support him financially – before, he had rented rice fields to farm on, but his landlord sold them to one of the companies. Though he doesn’t actively resist the dredging, he describes an uneasy coexistence with his new neighbors.

“We as villagers tolerate them to operate with the sand in the daytime only. At night it is noisy and we could not sleep,” he says, referring to the racket produced by the industrial machinery. “They seem afraid of us and dare not to dredge at night, or I will hack and destroy their tubes.”

In Cambodia, sand dredging has been controversial for years. In 2009, Prime Minister Hun Sen announced a ban on sand exports, which were being used for land reclamation projects abroad, mainly in Singapore. According to a 2008 report from the London-based NGO Global Witness, the sand, extracted for the most part from the winding Tatai River in the southwestern province of Koh Kong, was worth at least $8.6 million annually at the point of extraction – and some $35 million in retail value once in Singapore.

The 2009 ban cited environmental concerns – dredging has been blamed for riverbanks collapsing and for disturbing marine life – but a growing eco-tourism industry in the area probably also factored into the decision. With the ban, however, came significant loopholes. Dredging would be allowed where sand replenished itself naturally in the riverbed, to help unblock waterways, and, crucially, to meet domestic consumption.

Domestic consumption meant construction, and that meant dredging in Phnom Penh would continue unabated. The demand for sand was too high. Even in 2013, when the government, concerned about the combination of massive flooding and dredging, put a stop to the practice within the city limits, it continued to allow dredging in specific areas.

Chan Yutha, a spokesman for the Ministry of Water Resources and Meteorology, says that a new committee has been established to monitor and examine the dredging sites. The 2013 ban, says Yutha, “blocked local construction, so the government made a decision to allow about five companies to operate sand dredging at two locations in Phnom Penh.” He adds that the operations also help the flow of the river and have a beneficial, not detrimental, impact on the lives of its fish.

“Before, the demand for sand was less. The more construction buildings, the more sand is needed. Nowadays, most of the sand is used to fill the land in building construction,” he says.

But critics of the practice say that rampant, unregulated dredging, and the filling in of land that results from it, is changing the lives of communities for the worse.

“Dredging causes changes in water levels, which causes landslides and unstable river banks. The housing of these communities collapses, and they can lose the land they use to grow their food,” says Ee Sarom, acting executive director of housing rights NGO Sahmakum Teang Tnaut. Sarom points to Phnom Penh’s Boeung Kak Lake, which was filled in with sand to make way for a development that has come to naught, as well as other sites around the city, as living evidence of the problem.

“Sand is not only ruining the ‘look’ of Phnom Penh, it is a symbol of everything that is environmentally and socially reckless about the approach to urban development in Phnom Penh,” he adds. “It is symbolic of the prioritization of economic growth over ensuring that the most vulnerable communities and general residents of Phnom Penh have access to a green city, with affordable housing, functioning infrastructure and a healthy environment.”

Those conflicts are on full display in Deum Kor, where one 26-year-old dredging worker, who identifies himself as Run, says that although he makes an enviable salary of $600 a month, dredging is “not good” because it harms the riverbank and causes collapses. The village chief contends otherwise, and also says that 87 families are going to get new plots of land farther back on the man-made beach.

Many are split between the economic benefits and the realization that they are working to change their own community, leaving them in an uncertain future.

Yub, the former rice farmer, ponders the two sides of the argument. A dredging company had paid her $100 a month to park in front of her house. But that doesn’t wholly justify it in her mind. Things aren’t worse, but they aren’t great either. In a way, she’s beholden to dredging. ”It is difficult for us to say that our standard of living is getting better now.”